The Winnipeg Jets returned home 3 years ago.  My brother in law, Mark is an equipment manager for the team.  They recently did their first annual “Mens Guest Road Trip”.  And since Mark’s Dad was too far away to attend, I was able to go!  A 5 day, 2 game road trip to Anaheim and San Jose.  A break from the COLD!!!  Perfect timing thats for sure.

This is as close as a lifetime hockey guy like me will ever get to the NHL.  It was the dream of mine and many kids growing up to play in the show.  I can attest that it is not an easy life  but would be awesome.  It was great to travel on the charter with the team and get the real experience of the road in the NHL.   I however was with the equipment guys and they work looong hours.  I was the perfect candidate for the trip.  Game day, these guys work from 7am until 3am if the team travels after the game.  A little hard work never scared me.

I would also like to thank the Jets organization and particularly the Chipman Brothers for their hospitality and first class experience of being on the road with an NHL team.  It was greatly appreciated and I look forward to doing it again. 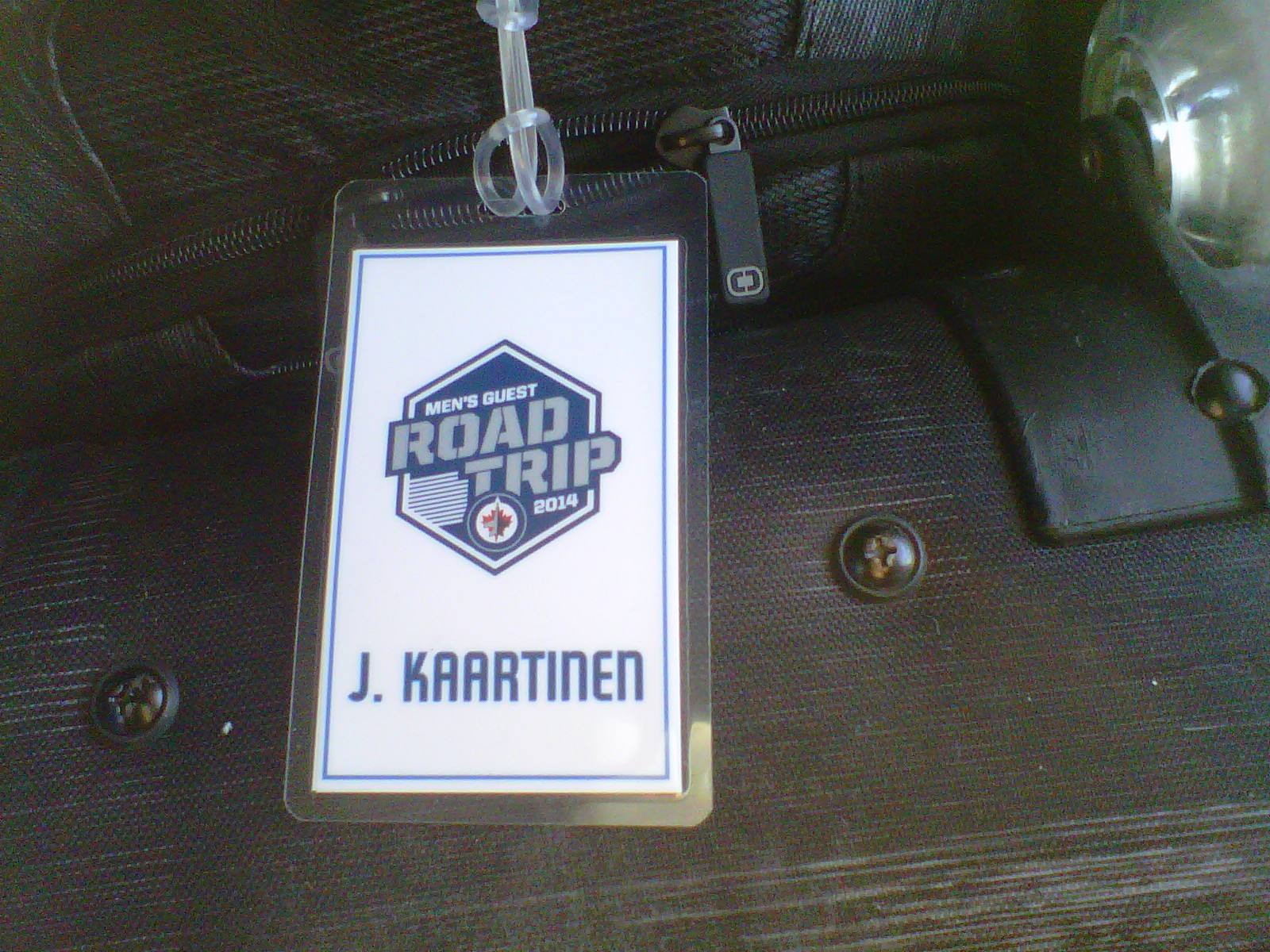 Mark and I get along like brothers.  It drives Rena crazy sometimes. 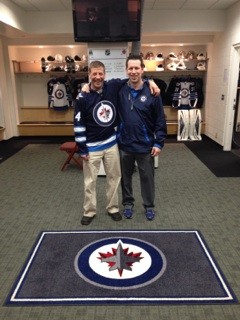 It didn’t take me long to learn the routine and just how perfect everything is in the dressing room of an NHL team.  The Jets had never been to Anaheim since they returned to the league.  I was the one to put the Jets sticker on the skate sharpener with all the other NHL team who used it before us. 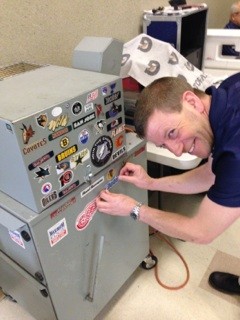 Center ice in Anaheim.  Ready for a fight.  Teemu and the Ducks had not lost in regulation all season at home before the Winnipeg Jets showed up. When ever the Jets play, listen to O’Canada and when “True North” is shouted from the Jets fans in the crowd in recognition to the company named True North who brought the Jets back to Winnipeg.  There was lots of Jets fans in Anaheim and it pushed the Jets on to Victory!!!  Minnesota sings it in french to deter the Winnipeg faithful but it does them no good! 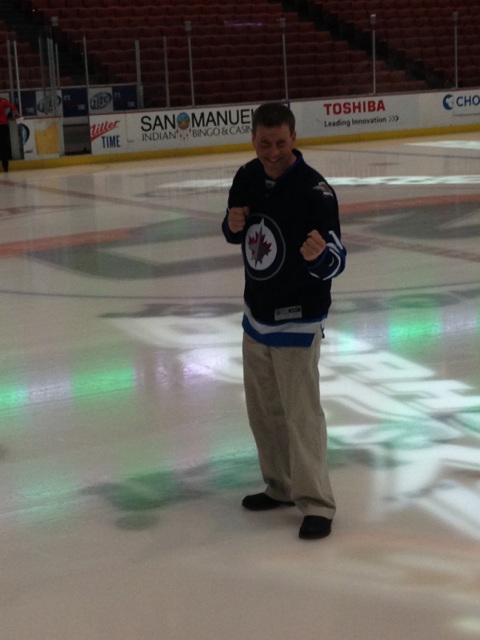 I was in the suites before anyone else since I was at the rink all day.  2 private suites, food and fridges full of beer all to myself… for an hour anyways. 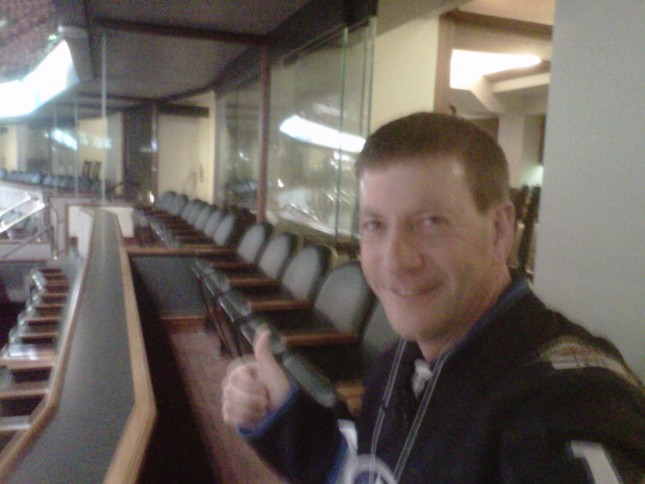 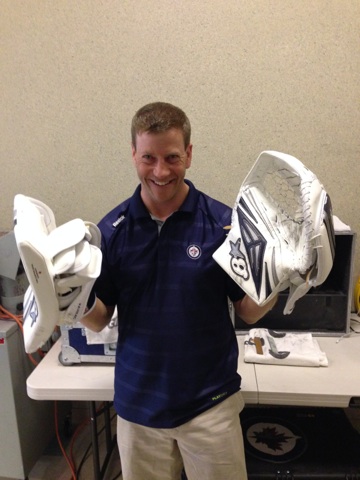 We did find time to go out to some nice restaurants, drink a few yards of beer and do some golfing at Boulder Ridge on the day off.  It was great to spend some time in the sun with my Brother in law and the team. 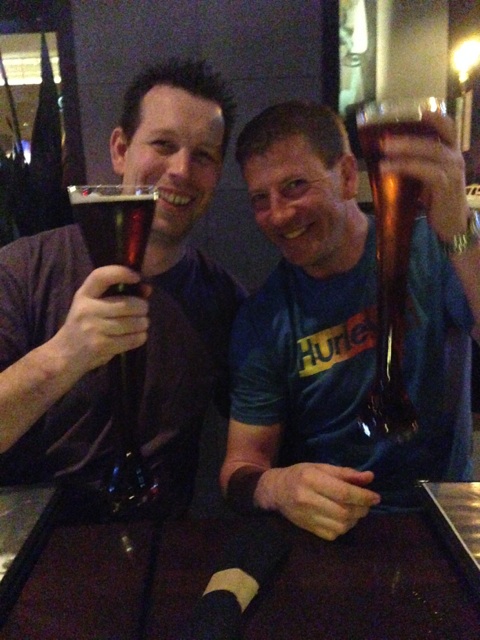 It doesn’t matter which arena I am in.  I always take the time to be out there by myself.  Silent, just waiting for the game to begin.  It was no different in an NHL arena than it is at home.   It is a feeling I have cherished since I started hockey.  The Shark Tank was was not as kind to us.  The Jets lost 1-0 to the Sharks in a well played game.  The Dads were funny after the game.  Typical, critical of their sons.  Just like I would be. 🙂 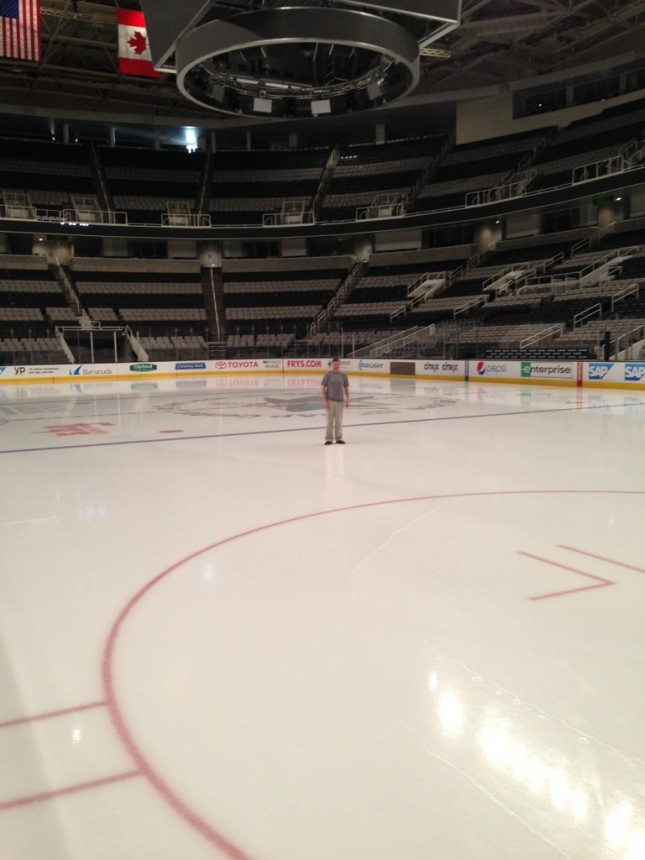 It was a great experience to be able to spend a week with an NHL team, helping with every aspect of the gear and preparation for practices and games. Interacting with the players before and after practices you realize they are on a different level but still regular guys who come from working class families and farms from around the world but absolutely first class and professional in every way.