It was a roller coaster season for our Bantam Hockey team. Made up of 14 boys and 4 girls aged 13 and 14 year olds. Our season got off to a less than stellar start winning only one and tying one in our first 9 league games and were in 9th place in a 10 team league. Many of those losses should have been wins but we made many mistakes which ended up in our net. Then after the X-mas break we had to play the top 2 teams right away! 2 more loses. There was many positives in those loses as I could see we were gaining confidence. Since the 2 losses in early January we did not lose another game! Beating every placed team, 7 straight wins to finish the season in 6th place. The league then split into 2 divisions, A and B. We then had to complete 2 best of 3 game series to claim the league banner. Half of the players on our team have never won a championship while the other half winning only one in their short hockey careers. It is fulfilling to see how they have all improved and grown as hockey players throughout the last 5 months.

Here is my daughter Maija and my nephew Trent with the banner we worked so hard to win! 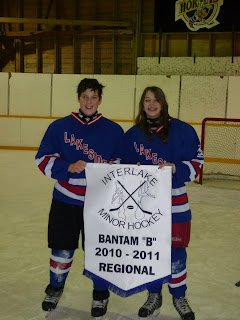 In the playoffs, we continued our winning ways, taking both series 2 games straight. Here is our 2010/2011 Interlake Bantam Regional Champs! 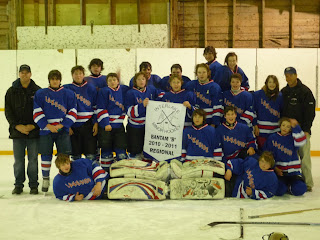 Here is Trent, having a seat in a place I have spent hundreds of hours in…..The Penalty Box!!!! 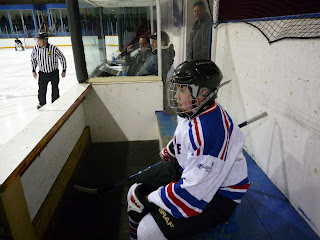 Only a few exhibition games left and that will be it for this season of hockey. Just like deer season, when it is over, you begin looking forward to next season!!!