The camps are closed, moose hunting is done!

This year we had 12 hunters, 4 unguided guys and 8 that were guided. Yours truly ended up with three weeks of guiding in 2010 and was able to get my hands on another experienced moose hunter/guide from within our family to guide the other 2. It was pretty cool to be spend 3 weeks in the bush at 3 different lakes doing what I enjoy…hunting!

Let me start by saying that hunting North America’s largest animal is not an easy undertaking. You can’t just simply head out anywhere on the lake and see moose standing there just waiting to be shot. It takes long days and time to look at many areas, the bogs, the ridges and high ground if you want to be successful. You need to be rested when you get here because you may be tired when you leave. Moose hunting most of all takes patience, calling all day in one spot is not uncommon, watching and listening for many hours, waiting to here the bush move or a stick break or the best sound in the world, a grunt from a bull!

The first week we hunted Shearstone with 2 guys from Missouri, Kevin and Ken. We hunted hard the first couple of days, finding some fresh sign, seeing one cow and hearing a couple of single grunt answers from bulls but I was not able to get them to come to us. I know from experience that you can never give up until the hunt is over but the guys had some work commitments and had to head home and we had to come out on Saturday. I am certain we would have been successful on Shearstone if we would have been able to stay the entire week, and it is disappointing, but in Big Game hunting, sometimes you come up empty handed.

From Shearstone I moved to Blackbirch, the lake I have spent more time on than any other. The hunters this week were Gene, who has spent more time on Blackbirch than me and one of his Mule deer guides from Nebraska, Josh. 21 years old and full of energy. We were in for an adventure. Throughout the week I was able to show Gene some areas on the lake that he had never seen before in his 90+ days spent there, and every afternoon Josh and I would head into the timber, calling, looking for sign and hoping to have a monster come and fight us. We saw some very interesting country up on top of the hills, down in the valleys and in the heads of the bays. We did find 2 of the coveted “wallows”. A wallow is a pit, like a scrape for a deer, and if you find one, you need to spend some serious time in that area calling. The bull urinates in a hole he has dug and rolls in it to give a musky/piney smell, a smell you never forget.

On Tuesday of the hunt I was calling from a ridge, about a 1/4 mile from Josh when I turned my head to my left and standing 30 yards from me….a spike bull! He was staring right at me and coming closer. I was trapped. I waited until the bull went behind a bush and I was off, sprinting through the thick alders, and pines trying to get to Josh so we could get another look at the moose. After getting Josh in hand, we headed back to try to call him to us. We spent a couple hours trying to coax him back to no avail, he must have smelled us. The next day I looked in the bush in that area and discovered he was just yards away but quiet as a moose, standing there motionless, by the tracks and droppings I found.

Thursday rolled around after much wind, the worst thing to have when moose hunting, and just at dark as the wind dropped, it happened….A grunt! Right near one of the wallows I had found. Then another. And another. He was coming! The wind had just gone and it was flat calm, perfect. Grunting, breaking bush, coming like a freight train towards us, it was awesome. Josh was shaking like a leaf and so was I! The moose walked through some water, we could here every step as he got closer and closer. It sounded like he was right on top of us but I knew we would not see him until he was standing right in front of us. For 15 minutes he came, grunting, breaking trees with his antlers, crushing trees while he walked, grunting with every step. As he got closer to the shore I could see trees moving back in the bush a little ways, Josh was ready….Then just before he came out in the open I felt a slight breeze from the south, at the time I did not notice it and concentrated on the moose, He continued to rake the brush, you could hear he was big by the hollow sound of his antlers on the trees as he came to the opening I had envisioned, it was going to happen. Then… HE STOPPED! Right in line with the direction the breeze I felt 5 minutes earlier. We waited for an eternity but I knew. He was gone, the next branch we heard break was 50 yards back in the bush, then 100 yards a small stick broke and a weak grunt. GONE. Such excitment and disappointment all at once. All we could do was keep hunting. Josh had never shot a moose but was able to experience the best part!

Our time for the hunt was starting to dwindle as Saturday approached, now is when the patience pays off, it was windy once again which frustrates me to no end but there was nothing I could do to change it. Fate had pushed us to one of my favorite spots on the lake and the wind went down, finally, and hour before dark. I continued to call to the best of my ability, not to loud, waivering like a cow really in need of a bull! We were up on high ground, a great vantage point, we could see across a beaver pond and the far shore of the next small lake. I continued to call and watch. I noticed a black spot on the far ridge….then as I watched it, it disappeared!! Turned up tree stumps don`t do that. As I walked over to Josh to tell him what I saw, there it was, a bull standing on the far shore of the next small lake looking right at us. I gave him a soft sensual call, hoping he would swim right across the lake. Instead he opted to walk around. I hoped that he would not take too long and show up after dark… Lucky for us moose walk fast, it was very rewarding to be able to watch a bull moose walk over a mile right at us. When he walked into the bush to navigate the shoreline, we moved closer to where we could get a better, closer shot. We were going to meet him half way, down the rock we went, Josh being so excited slid on his butt down a 20 foot rock to get there as I found the old man way down. Getting to the spot right by the other wallow we found, we were in position. The moose was in the first bay of the other lake and grunted once quite loudly as I called out to him. It was going to be 300 yard plus shot for Josh, but he had a great rest and was ready and waiting. This whole ordeal took 20-25 minutes so we had some time to settle down as he came to us.

Then there he was, he rounded the corner and stood there looking in our direction for a few seconds as I whispered instructions to Josh. The moose continued to come closer…”when he quarters, give it to him” BANG, the moose never moved…”again” BOOM…Whack! an awesome sound of the bullet hitting. The moose staggered into the water as I shouted at Josh to keep shooting, Boom…whack, Boom…whack I told Josh beforehand to shoot until he falls, and he did. One last Boom…whack, and down he went. Josh`s hunting partner Gene was a half mile away and heard it all. He could even hear the celebration from Josh and I, so elated after 5 days of 14-15 hours each day, hunting our butts off. We were screaming and cheering like like we had just scored a big goal in a hockey game. It was awesome!! 21 years old, a hunter his whole life, and got an opportunity to harvest a trophy bull moose. Satisfaction. It was a long haul back to the lake but worth every drop of sweat. 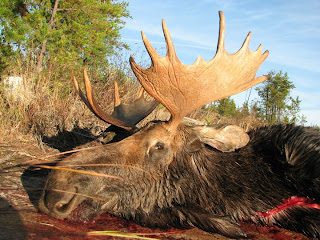 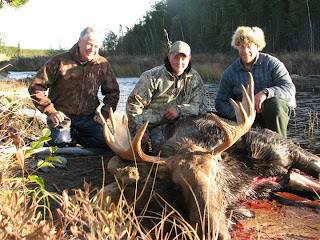 I was able to capture this adventure on video and hope to have time to work on it soon, keep watching.

Also there is still more stories to tell from our last week of hunting, stay tuned….