In 2010, we hunted into uncharted territory, hunting a third week, beginning on October 3rd. I know that the rut continues for some time into Oct and last year when Bill and David left after their hunt with us, they indicated that they would be interested in hunting that week with me. I was up for it and the plan went into action.

During the 2nd week our hunt went quite well, our 4 unguided hunters bagged 2 bulls and had another opportunity to take a cow but could not get a shot, the hunters I was guiding went 1 for 2, and our other guided hunters, Jerry and David, shot a nice 40 plus inch bull and saw a number of other bulls but as you have heard me say before, moose hunting is tough. Here is a picture of a nice one, 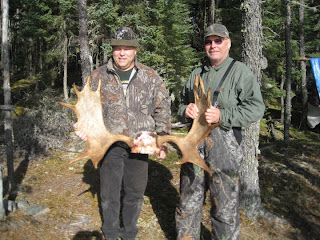 The weather was great the day all the hunters had to move which is nice, happy hunters out and only Bill and David headed back north with me to Loree lake. We had calm weather but it was quite warm and the blackflies were awful! We had a couple of bug nets but had to make a couple of more from some mosquito netting out of the Otter, but it would take a lot more than that to deter us! After calling in a couple of spots the first night we headed out for the first full day of hunting.

As I was getting to the spot where Bill had been calling the night before David whispered “moose!” We could just barely see against the sun….ears. I continued to call and we could hear them moving through the bush ever so quietly. Then….just as it was getting light, a bull! Just a spike bull and not one that we were going to take on the opening day. It was very cool to be able to watch him stare at us and try to figure out what was happening. What had happened was that a cow came to Bill’s calling overnight and the small bull just tagged along following the cow. The bull walked into the bush quietly and I left Bill on the rock as David and I headed up the lake to where we were the evening before.

We called. And the moose called back. Calm weather felt so good. I could here 2 cows in opposite directions and was quite sure I had heard a couple of bulls but nothing for sure. After awhile I left David to watch from the ridge and went to look at some other spots on the lake to see what was going on. I went directly across the lake and was having trouble getting the boat to plane out so I was moving stuff around in the boat to level it out, making a bunch of noise as I was only a couple of hundred yards from the shore where I was headed. I looked up….and there stood a 40 inch bull! He was coming to my call across the lake. He looked at me, I looked at him for 2 or 3 minutes as I drifted. What to do… the moose turned and started to walk away and I was off like a flash to go get David. After retrieving David we got up to another spot to try to call the 40 incher back. The wind had picked up and it was getting difficult to hear. We remained there for a couple of hours with no action. I left David again to look for more moose sign. The first spot I checked, I saw a another moose! This was the day. I saw him from a great distance because he was SO BIG! Again, which made me laugh, I had to quickly run back and get David a second time. It was time to try to stalk amongst the match sticks, (small trees) left over from the burn. As we got back to the spot, I hoped he was still there….

We were witnessing a show that few in this world people ever get to see. We were walking, trying to get closer and we could see this huge Canadian moose wagging his shiny antlers from side to side flashing his horns in the sun, standing like a statue, up on a high cliff over looking the whole end of the lake. This Bull had very flat antlers like an Alaskan moose. He was sending a message to the rest of the world that he is THE BOSS! A sight I hope to be able to witness again, but feel fortunate to be able to have seen it once. He was not going anywhere. The moose heard us through the wind and was facing us and looking mad. I want to describe the rest to you but the video I was able get says it all. Imagine how hard our hearts were pumping during it!

Watch this one full screen.

The hunt is not over yet, keep watching for the finale of 2010!!