The Trophy walleyes are active!

Findlay Lake was living up to its reputation last week! Curtis, Tom, Bill and Billy fished there for 7 days and caught a lot of BIG walleye! They had 1-29.5, 3-28’s, and more 27 inch walleye than they could remember. Numbers were spectacular in 12 to 16 feet of water where the fish ran somewhat smaller but out in the 20 foot depth they caught the trophies! Not quite as many but the quality was awesome! I do not have pictures from all of the guys but here are a few. They had been talking about going back to their old haunt, Blackbirch lake for 2011 but after this last trip they rebooked Findlay Lake for next season. Here they are: 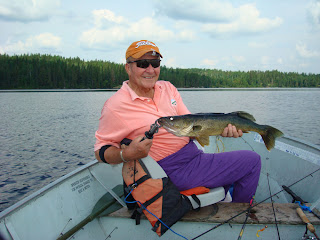 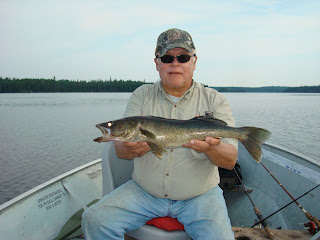 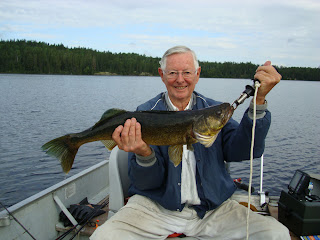 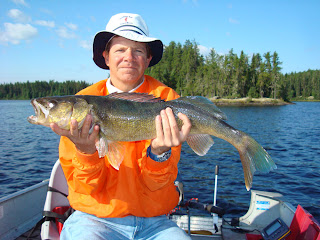 We had a very busy stretch lately with lots of fishermen changing over and here are some of the highlights:
The Cobham River had the Joyce/Sander party fish there last week. This is an every year adventure for these guys and they got off to a great start. One of the new guys in the group caught a 42 inch northern in the first hour! Northern fishing was very good overall with 5 northerns for the group caught over 40 inches with many 39 inch trophy northerns. They had a 32 inch northern attack a 12 inch walleye, landing both fish, that is always exciting! Numbers were crazy, with most boats catching well over 100 fish per boat each day, 137 was the highest for 2 people for the trip!

The Willows party fished Cherrington Lake for their first time. These guys fished Jeanette lake for many many years but have tried their hand on some new lakes, fishing Findlay in 2009 and Cherrington this year, always doing very well. As I always say, fishermen always catch fish! Size was awesome on Cherrington last week. So many walleyes caught between 23 and 24 inches! The largest was a 26 incher caught by Bruce and Richard had the biggest northern at 34 inches. But it will be back to their old stomping grounds next year….Jeanette in 2011! They were 5 guys this year, missing Arnie J. Are you gonna make the trip with your buddies next year Arnie?

Blackbirch had some Indiana boys fish there this past week, part of a large group of friends who have made Blackbirch their vacation destination with various groups since the cabins were built by Charlie Weyerhaeuser in the 80’s. I will be hunting with another part of that group later this fall on Blackbirch! We appreciate the good word of mouth. This week was great for fishing everywhere including Blackbirch. These guys caught fish until they were sick of it. Depths ranged from 3 to 18 feet of water. Lots of 20 inch quality walleyes and 24 was the biggest.

Cobham Morley had some new guests fish there who enjoyed the peace and serenity the north has to offer. Anders E. and his family fished 7 days on the Cobham and caught a lot of fish. Grandpa (Ramiro) caught the biggest northern for the week measuring 40 inches and fat and Sebetian caught the biggest walleye at 23 inches. No depth finder for these guys, it is old school, go find the fish! They were very happy and plan on returning in 2011!

Cherrington also had some other fishermen return after 5 years absence. Patrick G. brought his Dad and Father in-law to Cherrington and had a great trip. Herb caught and released a 29 inch walleye and Denny caught a 37 inch northern. I hope to see these guys again before 5 years next time.

Time really flies. It is August already and in a few weeks we will be slowing down and starting to look to the end of the season. Plenty of fishing left yet but we are getting closer to hunting season everyday!!