Jim who hails from Iowa has brought many a fishermen to the granite rock we call Northwestern Ontario specifically the Cobham River System. The cabin we purchased 6 years ago was originally erected in the 70’s and Jim began fishing there then. (Morley and Daniel were built on Cobham Lake in 1992) The Cobham is a lake of extreme water levels. It goes from being as high as it ever was last year to quite low this year, 4-5 feet lower than last. Jim told me he has seen it so low one spring that they had to physically carry the boats in the rapids going down the river. Alot has changed since then, from coleman lanterns to propane lights, to bright solar powered light. The running water has gone from running to the lake to get it to simply turning on a faucet in the cabin with the aid again of solar power. He now makes Cobham Morley his home for one week each summer with his crew and I wonder how many 40 plus inch northerns he has caught on that body of water in 30 years.

Pat has been with Lac Seul Airways since the original owner John Hannaway back in the 70’s and loves to catch Lake Trout. And Springpole has some Huge Trout. I have heard a ton of stories about John and most of them have alot to do with him being grumpy and giving gruff orders to people around the dock. Pat’s brother Bill joined the group in 1986 and figured he would have a laugh during the weighing of the gear before the flight to Springpole. As it was being weighed, he lifted on the cart, making it look lighter. John Hannaway did not think it was very funny. They went from being the first flight out that morning, to flying in late that night, waiting around all day for John to send them out.

It is good to see all of our regulars and hear the stories of past trips and good times!

In my last post I did not have all of the pictures from the group, Tom C. sent us this one of a great looking 41 inch Trophy! Thanks Tom, you will have another picture on our wall again! Keep it up and we will have to create a section for you and your family! 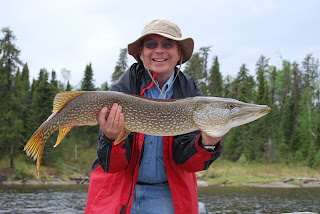