Moose Hunters are gone and the camps are closed.

2009 is officially over for us at Amik Outposts, as far as customers go. We still have some work left to do to prepare for 2010 in Red Lake but will be returning to Manitoba soon. If any one is interested in dates for next season please drop us a line and we will see what we have available for you.

We had a huge variety of weather from one week to the next this fall. During the first week of our hunt, we had 75 degrees and sun everyday. Generally not your optimum weather for hunting big game. Then during the second week we had cool temps in the 40’s everyday with a east wind that did not stop for 7 days, day or night. Again, not the optimum weather one would want big game hunting. Even with the weather not in our favor we did quite well in 2009. We went 2 for 6 the first week in the heat and 4 for 4 the second week in the wind. Only one party was not able to get a shot at an animal this year but heard plenty of moose answering but just not willing to come to the call yet. It was a late rut this fall. Everyone else saw multiple moose and had quite a bit of action. There are a number of stories to tell. From James catching a Pine Martin on his fishing rod to one of our hunters, Bill almost getting run over by a bull, cow and calf! I will get those posted this week coming along with some pictures.

Here are the moose from this season. Smaller ones this year due to the late rut. Some of these guys have shot moose before with us and some of them it was their first. Hunting moose is not easy, so any moose taken is a trophy, not to mention excellent eating! 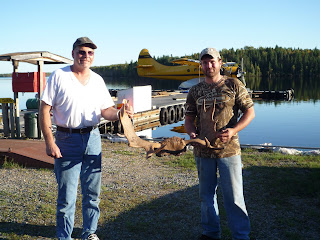 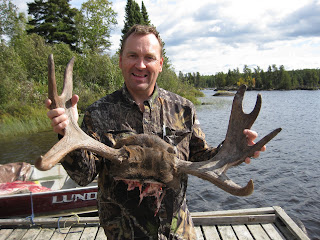 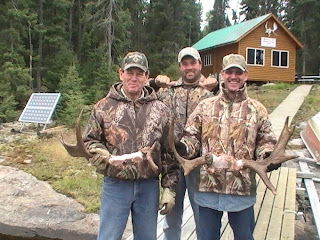 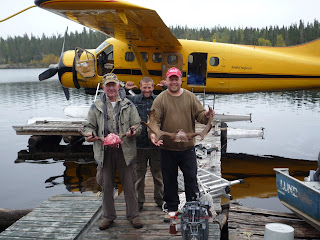