From Teens to Grandpa, everyone is smilin’ at Amik Outposts!

Sore mouth stew is the soup of the day lately here at Amik Outposts, fishermen have been coming smiles of anticipation and leaving with smiles of an awesome fishing trip! Fishing and weather have both been great, giving every fisherman or woman an awesome tan! Some groups coming out today said that this year was the best yet! Walleyes generally are in 10 feet of water or less, Shearstone reported catching lots of fish in 5 feet! Here are some highlights from today.

Shearstone had a great bunch fishing it this week consisting of the Beaird and Johns families. They had some big stories to tell this morning with big smiles on their faces! A 17 year old elated Hilary caught the biggest walleye at 26.5 inches and 14 year old Dillan caught a 39.5 inch northern. They have done a number of flyin trips with a number of outfitters and by far this year was the “best fishing and best cabin yet.”

The Huson party fished Cherrington for 4 days and came out happy as heck! There was two 17 year olds in this group and guess what… they caught the biggest walleyes! Kevin had a 26.5 inch and Alex had a 24 inch walleye. They stated that 90 percent of the fish they caught were 19 to 22 inches in length and they caught a lot. Those are nice fish!

Findlay lake had some long time guests stay there this week. The Glasebrook/Burm father and son teams have been fishing with Amik since 1989 as far as we can figure, a few years longer than Rena and I have been around! They first fished with us when we had a main lodge on Deer lake for a few years and moved over to Findlay when it was built in 1993 and haven’t missed a year yet! Nothing really big this year but plenty of quality was caught and released. Many walleyes measured 19 to 22 inches. They were happy to be back and sad to leave, just like always…

Vee lake had the Evans party visit this week for their annual trip and they said that this was the best walleye fishing they have ever had! So many big ones have never been caught as this week on Vee lake for this veteran crew. Ron took all the money as he had the biggest northern measuring 42 inches and an absolutely huge walleye measuring a fat 29 inches. Gary caught 6 or 8-24 inch walleye in one day. The most fish over 20 inches they have seen yet on Vee in some large numbers.

Here are the pictures from D. Hoene on the Cobham last week. Some pretty fast action on the fly rod in 4 feet of water. 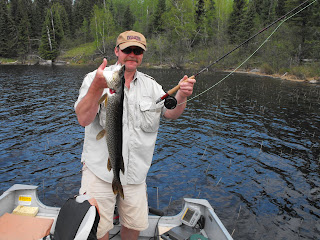 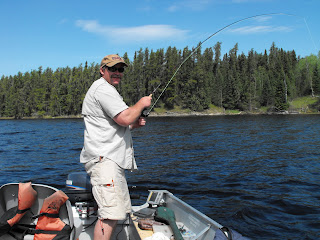 60 of these in one afternoon! 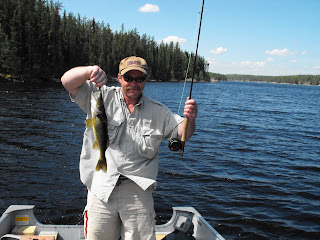 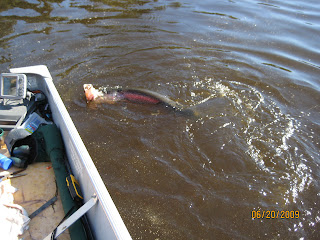 Mike was not to be out done by Dick with this nice fish. 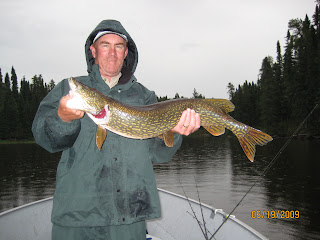 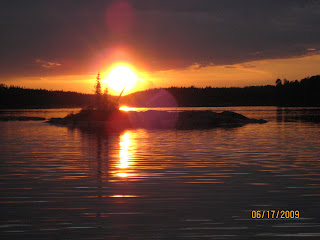 An average walleye for this old hockey player! 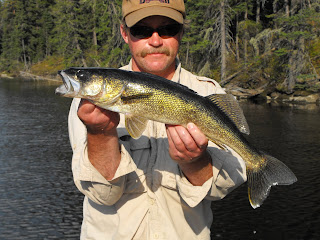