It was a thrilling first game of the series versus Stonewall!! Most of our team had the flu or was just getting over it so I was not sure what to expect from everyone. Matthew, one of our best defencemen’s eyes were like sheets of glass they were so glossy. When Tera one of the girls, came into the dressing room and said she was looking forward to this game for 2 days I knew things were looking up. I just kept telling them to give it everything…leave nothing behind…go hard…and I also told them that they know how to win, they did it last year, think about that and what it took to get there.

We were down 2-1 after one period, down 4-3 after 2 periods. A penalty shot was even awarded to either team during the game, no goals were scored. Every time we tied it up Stonewall came back at us and took the lead again. We were constantly fighting from behind. But everyone was playing just the way I knew they could and gave it all. Leo, one of our defencemen was laying out kids left and right who were way bigger than himself and it fired up his team! Giving them the will to come back. Tony, our most trusted goal scorer scored 3 third period goals, the 5-4 go ahead goal at 3:05 was from behind the net. Generally the team that skates and works hard gets the lucky bounces and tonight we did! But less then a minute later Stonewall squeaked one in to tie it up. It was looking like overtime for sure when Maija(my daughter) got the puck at our blue line and went around their defencemen like a flash, streaking up the middle of the ice… Tony was breaking up the middle as well and Maija gave him the puck at their blueline for the breakaway….and he put it in with 24 seconds to go!!! Stonewall called time out and pulled the goalie. The puck did end up in our end for the last few seconds but we kept them to the outside and blocked a couple shots to hold on. Game 2 is on Saturday…… 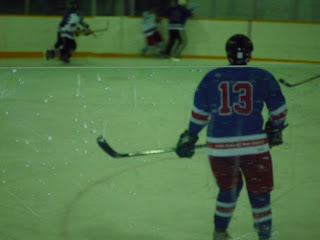 The rematch of the Dads vs the local Midget team was Friday night. It was another tight one. When they are little we used to let them win, now they are older we can’t let them win!! The boys went up 6 to 5 on the Dads with 37 seconds to go. It was tough to swallow. But with the score keeper asleep at the wheel we got a few extra seconds cause the clock didn’t start right away and we put the pressure on. We crashed the net hard and I picked up the Garbage as I have many times in front of the net and shovelled in the tieing goal with 13 seconds left. Overtime! Guess who scored to win it??? Johnny. I picked up a pass from Virgil Johnson (a grey bearded grizzly looking dad) in our own end and had room up the boards so I went. Crossing their blueline I let her rip as hard as I could along the ice. It had just enough juice on it to get through under thew tenders pads and went in. The Dads were victorious again! This time under a small protest about the clock but still a win!!! The winning goal is on tape so I will see if I can get my hands on that video.

Rena, the girls and I did the car rally/scavenger hunt on Saturday. It was a blast, driving around finding weird things like an Eatons catalogue, handcuffs, a 1993 newspaper clipping, an 8-track, a roll of quarters and so on. It was fun. 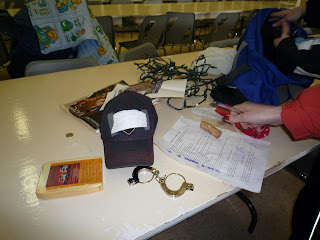 Saturday night was hockey again, the Oldtimers night, we played with a sponge puck that had a hard center so it still had some weight to it. Way more fun to handle and pass. No contact this night, my brother and I had pretty sore bodies from the night before playing the Midgets. Those water bottles in our hands helped with the soreness though!:)

The Eriksdale Mustangs were a team my Dad coached to a few Championships. I was at those games… I was a baby sleeping under the concession booth. 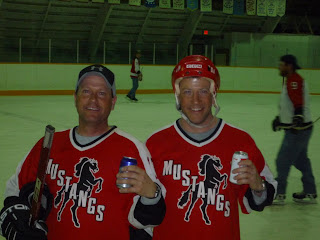