Temperatures Cooling off a little.

The Boots in the tree!!! I’ve seen a few of these in my time in the Bush. 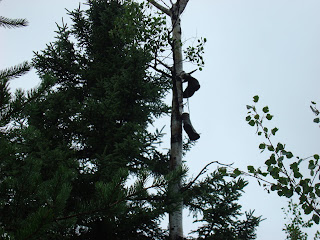 We had some excellent weather for awhile now and I knew it was going to change sooner or later. It came this past weekend, our last really busy weekend. Saturday it was perfect, after the fog left. A little delayed but everyone had a good time and fishing was normal. I knew the weather was going to change on Sunday, more so up north. There was a front sitting 50 miles north of Red Lake, cool up north and hot down here in Red Lake. Everyone on Sunday too were moved in good time. It then proceeded to rain and mist for 2 full days up north. The Findlay guys I picked up today(a day late due to the crappy weather) said that the fishing was great in the Rain!

Here are some of the latest Notable fish:

Findlay Lake Eggers Party. These guys have fished many of our lakes and this one ranked pretty high. They are talking about bringing up the Grandkids next year!

Ketron Party came out of Morley and reported good fishing. Lots of 19-22 inch walleye and a 39 inch Northern. Commented how fat the fish are on the Cobham.

The River had the Rolfs Party. Every one in this group caught a Northern over 40 inches! The 2 Largest were a 44 and a 42 inches and many more in the high 30’s. They saw a cow moose right across the bay from the cabin calling and looking for her calf!

Springpole had the Hiscocks party. A great bunch of guys who’ve been fishing with us for many years. The Lake Trout fishing was excellent, as well as the walleye fishing. Mark figured they caught well over 50 Lakers and some of them were HUGE. 36 inches being the biggest. They had quite the temperature cahnge during their stay too, from 87 to 37 degrees. The largest walleye was a FAT 30 INCHER!! Everyone had a good time and are making plans for next year.

The Anderson/Unruh party were at Daniels and caught how many fish????
Click on the pictures to enlarge. 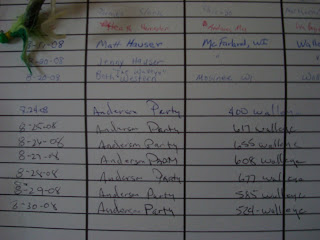 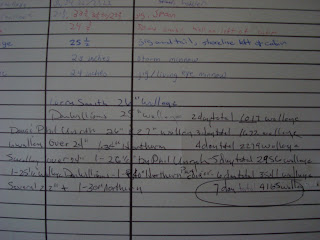 I was up there in the rain too, closing a couple of camps. Rainy weather sucks to work in. 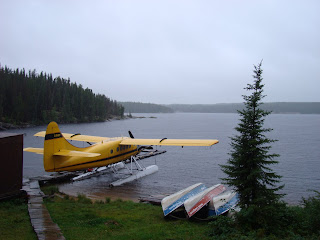 I will be closing camps and doing work on the camps soon but I will try to keep you up on the September fishing reports and progress reports from around the camps.