The end of our fishing season is almost here but we are having some fabulous weather. It is around 75 degrees today and nice and sunny have been up north closing camps for the past 10 days or so and getting some work done at the same time. Sleeping in a different camp every other night. If you have to get up in the middle of the night you better make sure you know where you are:) All camps that we do not use for moose hunting are closed up for the season. Last year at this time I was at the Cobham closing it down and it snowed four inches!! 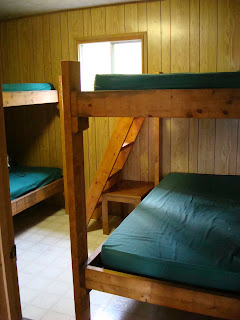 I put the bunks on either side of the window and with light in the middle it give a lot better light and better use of the space. Good solid bunks. 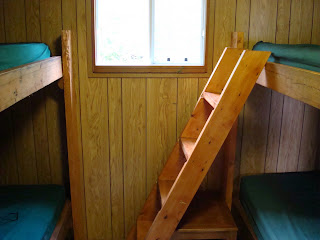 The weather was good for working and windy enough to keep the bugs away. 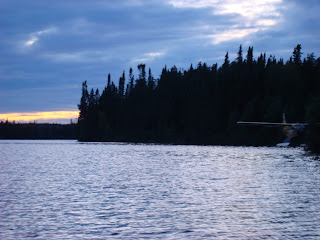 We also moved the boat house over to the side to open up more of the view from the cabin. New walkways and a new fish cleaning table. The fish cleaning table was kind of forced to be rebuilt as the big trees out front blew down a while ago. 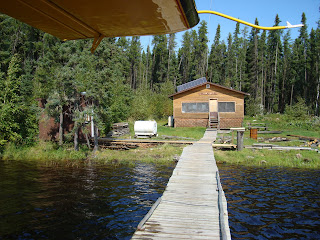 A nice sunrise at Shearstone Lake. 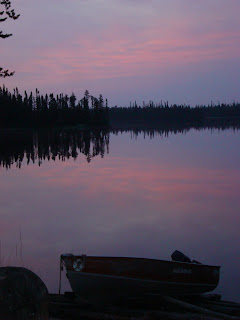 The summer sure flew by but here it is….The last fishing report.

Vee lake’s last party was the Darling group. Quite experienced fishing couples had good fishing but had to fish as deep as 30 feet at times to catch the BIG ones. A 24 inch fattie was the largest walleye and a 38.5 inch Northern.

Jay and Duane from South Dakota brought a couple new guys and fished the River previous to the last group of fishermen and had a Blast. Duane had the largest walleye at 24 inches and Glen had a 39 inch northern.

Today I brought out the last group from the River. The Fuhs party. They had excellent weather, just enough beer, no problems catching walleye and 3 northerns over 40 inches,a 40,41,and a 42 incher. A great bunch to have. Very organized, nice to see.

Springpole Lake saw the Nicklaus Party from Wi. The first question I heard was “Did the Packers win?” I was in the bush just like them but come to find out that they did:) Ron had a 41 inch Northern and they had excellent walleye fishing catching many over 23 inches and a 25.5 incher. They had 6 nice Lake Trout also on their last day. They will be back next year but a little later to fish those Big Trout shallower!

Blackbirch had the Mc Brown Party. They had a bunch of huge walleyes with a few 28 inchers and one quite a bit bigger, they figured it was 9-10 pounds. The water came up fast when they had a day of heavy rain. Good times.

Thanks to all of our fishermen who made the trip up to see us this summer and keep an eye on the Blog for fall happenings and moose hunting reports and hopefully some good video from the Hunt!