The Weather is still Great and the Fishing is Too!!

The Jones Party came out of Blackbirch this morning from their first trip with us. They had a Blast. The weather was perfect and the fishing was Great. One morning 3 of them caught and released 107 fish in 3 hours, Jenni was fishing off the dock and caught 12 fish, these are just a few of the stories we heard this morning. They also saw a bear swimming across the lake and eagles who befriended them and followed them around all day, waiting for an easy meal.

Jenni was so happy to be the co-pilot on the way home:) 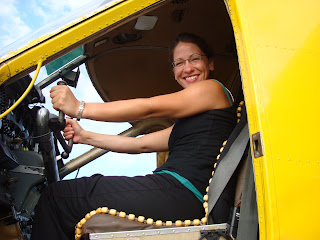 Here are a few highlights from the past week,

Findlay had the Longshore Party from Ohio. These guys have fished here many times and Findlay did not disappoint once again. A Pair of 27’s and also a Pair of 26’s in the Walleye category. It was fairly hot for their liking but it cooled off at night. They also saw a bear crossing the river coming out of Russell lake.

Morleys on the Cobham had the Cook Party fishing this past week. They had a number of 40+ inch northerns up to the boat but…those ones got away. Seeing them up near the boat and how big they are is almost as good as actually having the pleasure of holding one of those monsters for a picture! They did catch 3-35 inch northerns and tons of walleyes. One 35 inch northern was caught on an ultralight. The mid-sized fish are generally the hardest fighters and catching a healthy northern on light tackle with no leader is a lot of fun!

Cobham River had our Hardcore Northern Fishermen from Parts Unknown! These guys love to eat walleyes but only fish them long enough to catch supper, then its back to the hunt for the Big Ones!!! This year they did great once again. The Largest fish of the week were 42.5, 42, and 2-40 inch Trophy Northern and had 41 measuring greater than 30 inches. Scott told me if you looked at each years pictures, you can see the fish pictured are larger each trip they make. They are getting more experience on the waters they are fishing and our conservation policy is paying big dividends. Here are last years pics from them and I will put this seasons up when I get them.

Bob H. and some friends came out of Cherrington yesterday, one of his friends was from Berlin, Germany and had never fished walleyes before. They said that the walleye fishing was totally crazy!! Bob H. said that their walleyes averaged between 20 and 24 inches. One of the many times they had a double header on, it turned out to be two Beauties, a 25 incher on one side of the boat, and a Big 27 incher on the other side. He said they make a trip every other year and he definatly wants to go back to Cherrington!!