3 camps changed over today and all fishermen/women were extremely happy!! We had a little rain yesterday but I did not have to fly so I was Happy to work in the office:) Today had a little bit of low cloud but the weather was plenty “flyable”.

Jeanette Lake had some good friends return for their annual trip. The Buster party spent the last 7 days on Jeanette and Sesi. Each year they fish both lakes and this year the fishing was significantly better on Jeanette. Size was good, a 27 inch Walleye and a 36 inch Northern. Great weather and good times were had all around.

Findlay Lake had a 3 generation family of men fishing there. The Pfeiffer party had an awesome time. A few teenage boys, Dads, and Grandpa. They had an awesome time but were really sunburned and were happy to see some cloud near the end of the week. The boys were peeling like crazy but it did not matter…. the smiles were huge! Grandpa had the longest measurement of the week “A SIX FOOTER” with a reel attached! It was a funny story and it is hanging in the cabin on the deck. Todd caught a 37 inch Northern on the last cast of the trip, we work it out that way.LOL

Cherrington Lake. Fishing on the big lake in July is one of the best times that can be had. The Zech party came out today and they had a few people in their group who had never been to Canada before. Let me tell you, they were impressed! Aaron and Judy fished for 32 minutes in a bay that “I marked on the map” for them. They had 28 fish in those 32 minutes. Now that is some fishing. Every spot out on the big lake that I marked also produced, that makes me feel good. Their eyes were so excited when I picked them up. Here are just a few pictures and a link to Suzy’s pictures, I think she was a “Real” rookie with not much fishing experience at all. I think she did rather well. 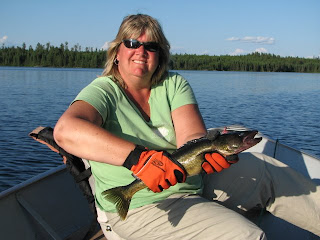 This was what I had to look at this morning 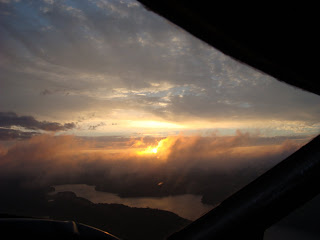 You should catch many different sizes of fish 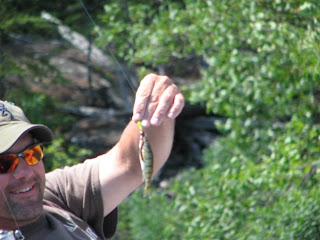 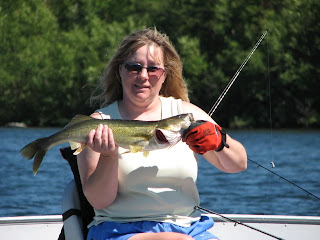 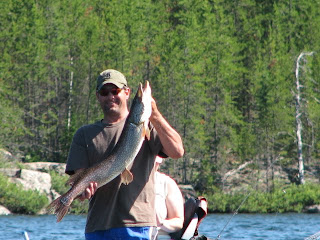 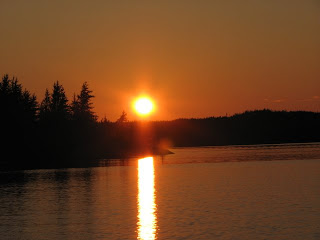