Sure is nice to have good weather for flying.

Another weekend has passed by and the weather was great. A few showers around but good flying weather but on the busiest day, Sunday this week, the weather was fabulous. Sunny and light winds. I was able to go up to higher altitudes and take advantage of the more favourable winds and let my passengers see more of the beauty of the North.

Water levels are up but Morley’s is the only dock that I have to back the Otter closer to shore to unload but just barely over the dock. Perfect water levels for this time of year as long as the rain slows down. Nice weather is here to stay…hopefully.

Fishing this past week was good, the Trophy Northerns were just Followers this past week. Not quite as many 40 plus inch fish caught this week but lots of them were seen! They were coming right up to the boat following peoples lures (or walleyes)and then just stopping, slowly disappearing down into the water. This made for some good stories if nothing else. One fisherman at Shearstone had Northerns attack his walleyes 5 times during his trip! Landing one of them with the walleye in his mouth.

And then there is always the story I hear all the time “I had a Monster right up to the boat but the guy on the net was a little slow!” This has caused more than a day or two of silence at the outposts over the years. But I always love to hear the the stories and laughter after the fact.

One thing to note, I am going to be more diligent on the anchors at the camps from now on. I will be looking to see that there is one anchor per boat at the beginning of the trip and then again at the end. We have had a few go missing and then the next group who shows up may not have an anchor if they choose to use it. If you lose one just let me know at the end of your trip and then you will have to pay for a new one.

Here are a just a few of the Trophies caught and released this week,

Jeanette Lake Arnie`s boys had the Biggest fish, a 45 inch Northern and 25 and 26 inch Walleye.
Vee Lake York Party One guy had a 43, 43.5, and a 44 inch Northern. He had caught the least amount of fish for the group. Poor guy.
Loree Lake Beer Party 27.5 inch Walleye
Cherrington Laska Party, they are still in there but I saw them the other day and had just caught a 40 inch Northern the previous evening.

There are too many 24 to 26 inch walleyes to mention this week and tons of upper 30`s on the Northern.

The pollen from the trees this year appears to look more white than the usual yellow. It has mostly washed away in the last few days. 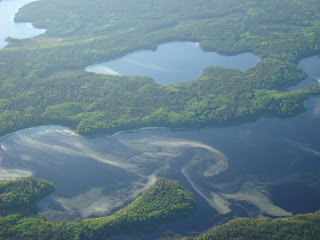