Spring has showed up here on the Prairies! It will slowly creep north and should start to warm up a bit up there in a couple of weeks. March generally is when we get the majority of our snow so we will see how that goes. I don’t mind if spring holds off for a bit… summer will be here soon enough.

We are hockey crazy right now. I have been too busy with Fishing and Hockey to get any updates on here. Here is what has been happening.

Maija’s team is the one I coach and have made it through 3 rounds of playoffs which are the best of 3. We played Gimli in the first round which went 3 games which we played well when we had to win but I could see the Kids getting the desire to win a championship. This team has never won our league but this year they really started to come around and I could feel that maybe this was their year. Second round was against Stonewall. They had beaten us 2 of 3 games this winter so it would be tough…. We swept them in two games! Maija scored the game winner in game one- a 4-2 win, and game 2 we dominated them in a 5-1 win to move to the final round against another upset, the 4th place Warren Wildcats who knocked out the first place team to advance.

This proved to be an extremely close series even though we won game one 6-2. Game 2 was played in Warren, in a lot warmer arena and on a considerably larger ice surface. Our team did not respond well. Losing 3-0!! I was not impressed. Even in any of our other loses this season we were never shut out. We had one day off to get ready for the final game of the series. It could not have worked out any better. I volunteered to go on a Field trip with Maija’s class to Winnipeg so I was able to spend the whole day with the older kids on the team. We had a great day but still pretty stressful having 40 some 10 year olds downtown, but good to spend time with all of them. I get along so well with those little heathens cause I was totally like them at that age.

Game 3!!! The atmostsphere in the dressing room before the game told me that we were going to win. Not to uptight, everyone was having a good time and not really nervous. We opened the game with a Bang, scoring right away and had all of the play in their end. Warren did get the odd rush though and kept coming. They ended up scoring 3 goals on the rush by the end of the second and their goalie kept us off of the scoreboard, we were down 3-1 going into the third. I was a little nervous but we still had most of the play in their end, we just had to SCORE! In the Intermission, I simply told them that THEY have to win the game, I can only put them out there to do it.. Again we started to dominate. Austin, who scored our first goal, pulled through again with a bullet wrist shot from the face off dot, which went top corner short side with 10 minutes to go in the third. We kept the pressure on and called a time out near the end to give the kids a rest and come up with a plan for pulling the goalie. The play came down to our end with just over a minute to play but we turned the puck over quickly and when it came through the neutral zone Dradon came to the bench, I put out a Strong Farm girl on our team named Tayllor. She went tearing into the zone and picked up the puck along the boards and shot it towards the net. Riley was there to chip it in front and hit the POST! The puck seemed to lay there for an eternity as every one converged on the puck… Riley was able to get to it first and tied it up with :56 seconds to go. There was around 200 people watching and the arena just went crazy!!! After that we were all over them again but could not finish in regulation. Overtime is so exciting, but we had Tony who has always been our clutch performer and had not scored in 2 games so he was due. With 2:06 remaining in the first 10 minute overtime Tayllor again turned the puck over in the neutral zone and sent Tony in on a one on one and he went wide beating the defenceman and getting a shot. The goalie saved it but the rebound came right back to Tony and It was over!!! What a feeling. The first league Championship for this team. They played their hearts out and were rewarded for it. Here are some pictures from the last couple of series: 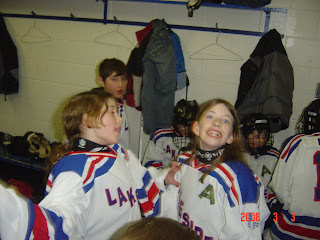 Jerrica and Maija during the Stonewall series having fun 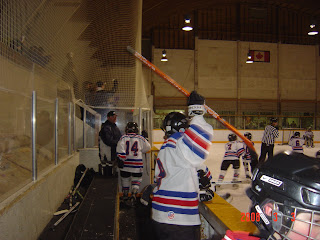 Tony the Zamboni after Sweep of Stonewall 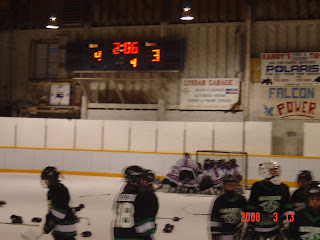 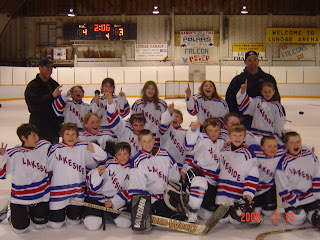 Winning it at home was even better.

Now we have to play the winner of the North half of our association, Fisher River Terriers. We have never played them so we will see if we reign supreme in the Interlake Region.