Deer season is over. Commercial fishing starts on Lake Manitoba.

Winter took a while to get to us, as it did in all of Canada and the Northern U.S. but it came hard and fast. Two weeks ago there was no ice around, but all of a sudden it was Minus 20 Celsius every day and snowing. It has snowed over a foot so far. We have made over a foot of ice in two weeks. This is unusually fast but it is not rough so it is nice to travel on. I am Commercial fishing for Walleyes on Lake Manitoba now and will be getting some pictures on here soon about that. Keep an eye on the Youtube for some Commercial fishing videos as well for two different Walleye Filleting styles of my brother and myself. I will put the links up on here when I get them done.

Whitetail season is over and I did not see a big enough buck that I wanted to shoot. Passed up 3 or 4 nice ones in the 120-130 class but was waiting for THE ONE. I did take a doe late in the season for some meat but had a great season being out in the bush. The weather was fairly warm and you could sit in your stand a long time before you got cold. The bigger bucks started moving fairly late here and are still going after the season is all done. I don’t mind, spread those genes boys,LOL. Good for the herd. There was some pretty big deer shot around my local area this fall with my brother having a good one taken a half mile from the farm where I grew up. We have a small group of guys who get together and show off their heads in a couple of weeks so I will have my trusty camera to take a few pics of some Interlake Bucks. 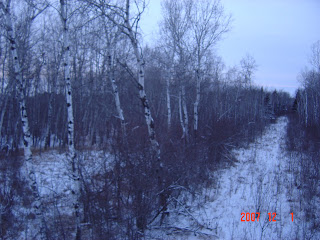 Now I have to wait another year to have this view again. Pulled my last stand on Sunday. It was -30 celsius on the morning of the last day. BRRR! I sat for only 45 minutes before I pulled the plug. 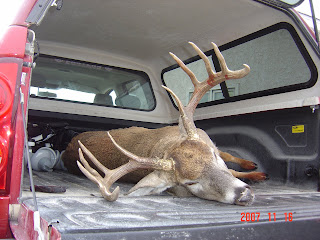 Hockey
Hockey season is well under way up here and even the rinks with Natural ice are up an running. I am playing senior hockey still and loving it. This is regular hockey with hitting, fights, and the works. Sometimes it can be a gong show out there. It can get pretty crazy since the towns around here have been rivals forever in every sport. But our true passion is hockey and we take it very seriously. Well seriously enough that we do not like to lose.

I am also coaching two teams. I coach my youngest daughter Maija on a mixed boys and girls team and coach both Taina and Maija on an all girls PeeWee team who plays against boys teams all season but enter Provincials in the girls Division. That is a little different coaching an all girls team, a first for me. They are both winning this season which is nice to see as the girls had never won a game in their previous 4 years. I have a bunch of girls who have played hockey all their lives and it shows. 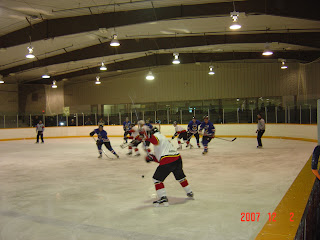 I played in Fisher River this past weekend and scored two goals in a 8 to 5 losing affair. It was 6 to 5 until late in the game.

Our problem as you can see from the picture below, is we only had 6 skaters! 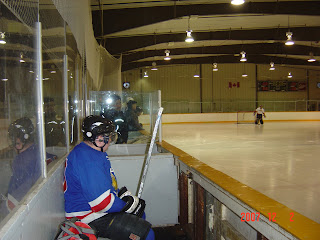 We had 2 defenceman and 4 forwards. All the guys on my team work and it just happened that most guys were away up north of out west this weekend. I played at least 55 minutes of hockey on Sunday which is way too much when you are getting hit, hooked, and making hits. Can’t fight when you have six skaters, although some idiot on the other team tried to goad one of our guys into a fight. One of our defenceman Jamie, who went to Green Bay with me never came off the ice for 60 minutes of hockey!!!! His brother Gordie who I played my minor hockey with was the other defenceman but he had 4 penalties so he had a rest a few times. We were down 4 to 0 after the first but it was 4 to 2 after the second and in the third we tied it up at one point but slowly ran out of gas. We did hit 2 goal posts in the las 5 minutes though, we could have won if the bounces went our way. Later in the season we would have been able to pull it out.