Fishing is so easy even a Blind man can catch Walleyes.

August is approaching the mid point and summer has just flown by. It won’t be long before the leaves are going to start changing. Weather has started to cool off some but sometimes the heat can still come back. Fish are moving deeper but only down to the 15 to 25 foot mark. Heard a few reports of catching some big ones in 40 feet though. Northerns are becoming more active with quite a few 40+ northerns being caught recently. It will not be long before we will be closing the camps. Maybe I could go fishing? 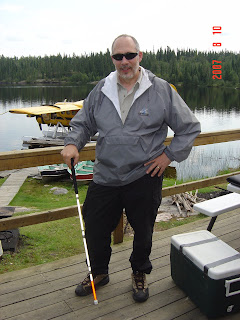 This is Mark E. He has been fishing with us for a few years and making two trips per year for the past few years as well. One to Shearstone in June and one to Loree in August. Yes he is blind but I talked to him about putting this on my blog and he thought it was a great idea. I stopped in there today to add a couple of more souls to the party to make 8 and heard the first fish for one man was a 41 inch northern just past the narrows with the cabin still in sight. Talk about setting the bar high right off the bat. 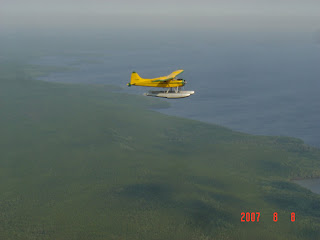 Here is a picture of a beaver as I am blowing by him. A beaver is a good bush plane but the 1000hp Otter we have is much better suited for the distance we are flying.
Notable Trips:

Findlay Lake, Longshore Crew. These guys have been fishing with us for a while now and Findlay is their favorite. A bunch of farmers from Ohio make the trip all the way up here but judging by the smiles on their faces when they came out, the long drive was worth it. They commented that the fish they caught were bigger this year than in years past. Here is a list of fish they caught this past week.
Ken 41 inch Northern
Phil 40 inch Northern
Ken 28.5 inch Walleye
Phil and Ken 101 fish one day
Lots of 24 to 26 inch Walleyes

Loree Lake, Anton Party. ND and MN boys had a few windy days but caught a ton of fish. 22.5 inches was the biggest walleye but caught over 1000 fish for the group. I can not remember the size but I was told that the first fish one guy caught was a big Northern around 38 or 40 inches if I remember right just past the narrows to the west still in sight of the cabin.

Cobham Daniel Hobson Party. Excellent time, quite a few first timers and had their eyes opened. A 39 inch Northern was the largest fish but caught an absolute ton of Walleyes. The quote as I remember it ” Fishing in the cabbage, raising those hogs out of there.”

Cherrington Lake, Halepeska Party. Yhese guys have spent a lot of time on Cherrington. This year they stated that the fish were slightly smaller than previous years. A 36 inch Northern was the largest and tried for lakers for a while but had no luck. They had a few windy days which is not good to head out to the big lake. Walleye fishing around the cabin was very good though and a good time was had by the Finns from MPLS.

Jeanette Lake, Grindle Party. These guys have been Lac Seul Airways guests for many years. They have also fished Jeanette lake for many years as well. The fish probably tremble when they get there. Fishing was pretty normal by their standards. A little slower the last few days after the weather changed and it cooled down. Wind played a factor in the fishing on Jeanette as well. They still caught some nice fish:
41 inch Northern caught and released by Greg
37 inch Northern
a few 25 inch walleyes

Cobham Morley, Herrington,Clark Party. Three fathers and sons. Of course the dads won the money for the fishing tournament. The boys all had the biggest northerns but however they do the tourney the dads won. A couple of 25 inch walleyes may have had something to do with the outcome. This is Brad and Brents second trip up with us as they were up in May and Brent was Sad to leave again as he said if he was not so busy in September he would love to come back one more time. The beauty and serenity of the North is pretty addictive. Here are there fish:
Heath 35 inch northern
James 35 plus 40 inch northern, boys all out together and no camera
Bennett 1st trip 32 plus 35 inch northern
Chuck(dad)1st trip 24 inch walleye
Brad and Brent(the veterans) had a couple 25 inch walleyes 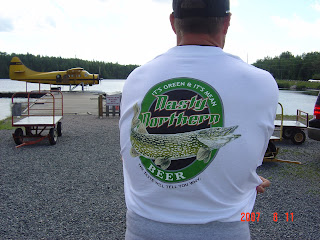 I just had to take a picture of this t-shirt. The Comstock Party was into the River this week. They love to fish for Northerns and usually catch the crap out of them. This was one of those years. They had 41 Northerns over 30 inches. A 43 inch Hog was was the biggest and it was follwed by a respectable 40 incher. There was 4 or 5 that were over 38 inches in the bunch too. Not a bad week of fishing. Kipp has been in the Esox Magazine holding some Cobham Northerns and maybe he will get his mug in there again. They only fish walleyes for about 2 hours a day, just long enough to catch a few for supper and then it is back to casting the shoreline. Pictures of fish to follow soon. 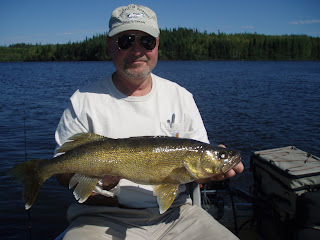 Bruce really likes to fish the Big lake at Cherrington. Once you get the hang of fishing the deep water you can catch a bunch of Huge Fish out there. 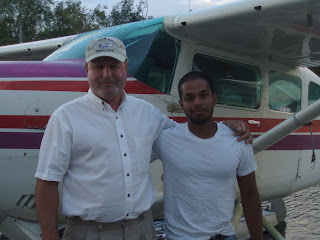 Bruce and Josh, our dockhand is heading back to college soon. He is a private pilot now and will be ready for a flying job somewhere in the spring when he is done school. He has been a pleasure to have around and has the right attitude. He will do well. Thanks Josh.