You never know who you will run into on our docks.

Doug P. from Iowa booked a trip with us fairly last minute to Vee Lake. He travelled to Clear lake in Iowa the day before to cut down on some drive time the next day. When he got up there his neighbors on Clear Lake were up at their cabin going fishing in Canada the same day as Doug and his sons. As they talked, they come to find out that they were going to the same place, Amik Outposts. Dougs neighbors were going to Cherrington Lake with the Van Houweling Party. A group of ten. They even ended up being on the same Airplane. I Dropped Doug off at Vee first and then dropped the Cherrington guys off after. Everyone had good fishing and good times in both groups. Doug had never fished Vee before and commented on how easy it was to find the fish. The best depth was 7 to 9 feet for their walleyes. Still pretty shallow but that is where they were. Cherrington on the other hand had most of their fish in 12 to 17 feet.

That is not the only Random running into this week at Amik. Dave from the Novotny party got off the plane from their trip to Findlay and was walking up to the office to see Rena when up on the deck of our office was his Nephew Dan Pumper. He was heading out on the next trip to Cobham Morley. They had no idea that they fished the same place.

Here is a picture of the fish of the trip, Findlay Lake, Novotny Boys. They had quite a number of Walleye over 25″. This one was a beaut at 29 1/2″er. 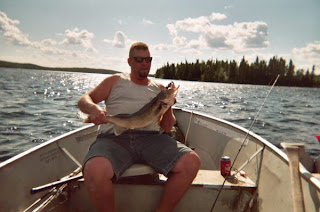 This Foster from The Novotny Group. 29 1/2″ walleye. One of many Trophies they were able to do battle with on Findlay. Perfect Weather and just enough Beer made for good fishing and good times. These guys are a good bunch of young guys that go to a new lake every year. Of course they must be kept in line as they are chaperoned by a couple of the dads, Gene and Dave. Thanks for the pic Foster.