Fisherman are fishing hard and the fish are returning to their normal patterns as the weather starts to stabilize. The Northerns are still deeper than normal on some lakes but in their normal spots on others. Walleyes are slightly deeper at times, as deep as 15 feet. Usually they are in less than 10 at this time of year.

I took Arnie J. into Shearstone today. He has a group of fine young men with him and this is also the first time that he has been able to go fishing in Canada with all three of his sons. I like to be part of events like that. One of his sons lives in Colorado and has never been able to make the trip. No fishing report from them yet as they just went in but the Wells Party came out today and had Very good fishing. They had tons of Walleyes and a couple of 38 inch Northerns. The interesting part is that they were bringing in 12 to 14 inch Walleyes at the time. It is pretty rare to land the Northern while attached to the Walleye. This time they got lucky. Landing Two Big Northerns attacking Walleyes. The second one let go of the Walleye but all they had to do was put the Walleye back in the water and the Vicious beast took him again and this time they were able to land them both.

The Knauf Party had the largest Northern of the week at 44 and 41 inches. Brad H. had a 42 inch Northern on the Cobham. The Boesflug boys had good fishing on Cherrington, catching a 30 1/2 inch Lake Trout.

Good to very good fishing reports from all of the camps. Leeches were key for the Walleyes at Cherrington and Loree while minnows were the hot at Jeanette. The Knauf Party said that frozen minnows were just as good or better than live ones.

Also I am watching the hockey playoffs closely. Senators are down two games to one. GO SENS GO!!!

Here is a copy of a Fishing Report from Findlay Lake, they were the second group into that lake.

2007 Report for the Holland Group.

First, the weather. Most extreme the group has witnessed, this being the 10th year for some members of the group.

Day one started with heavy snow and sub freezing temperatures. This was followed by a few days of sun and 70’s, and then four days of clouds and rain, with evening temps dipping into the high 30’s most nights.

Surprisingly the walleye were up significantly in size over previous years, with an average increase for the group of 3%. Greg was most improved with a 7% increase in size. Daily average size was 21 inches, making catching dinner a challenge, in terms of harvest length restrictions. Still, most days, due to weather, less than two hours spent catching the large walleyes, along with a handful of small ones for dinner.

We had a three way tie for large walleye at 26 inches each, for Scott, Mike and Tim. Greg and Bryan both posted 25’s. Scott, Mike and Tim split the large fish contest pool, and Greg walked away with Angler of the Year honors. Scott and Greg caught their fish on artificial lures, the rest came on jigs and leeches.

Northern Pike were very sporadic this year, with very few fish in the bays. A pair of 38 inch fish were caught by Ron and Scott, both casting bays, but not near shore. The rest of the above 30 inch fish were caught trolling weedlines and rocky points. Average size was down 6%, with only Scott showing improvement over last year.

Spoons took the two large fish, the rest were fooled by minnow baits. No large pike in the walleye hole or the falls this year.

Weather played a significant role in preventing any consistent pattern for Northern Pike, and several new techniques, along with some “ol school” tricks, were the order of the day.

Plans in place for a return in 08, confident that with more stable weather, the pike fishing will show a dramatic improvement in the size and number of fish caught. 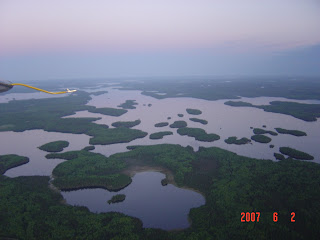 Here is the view looking West at the North shore of Red Lake at 5 A.M. I love being in the air at that time of day. 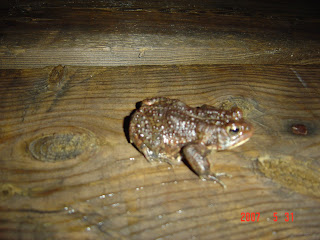 Have you ever been in the Bush and heard a singing or whistling sound that seems to go on forever? This is a picture of one of those Singing Frogs. I am sure they have a name, if anyone knows their name, let me know.