Finally got some Rain!

I realize that the Blog has been lacking lately.  We have been busy and when we were not busy we were trying to get the flying done.  It has been very difficult to get our people moved each day.  There were some monster forest fires, NW, North and NE of Red Lake which created a wall of smoke which we had to deal with each day.  Sometimes going over top of the smoke, going through the smoke or going around the smoke.  We had lots of delays and a few fishermen on each end that had to wait an extra day to get moved.

Being an optimist I knew we would get rain eventually and that things could change in a matter of a few hours……..if we could just get some rain.

Finally we had some big rains and some crazy weather that put out the fires closest to Red Lake, making all of the pilots lives easier around here!

Most of the fires are out now.  We only had one fire that was a concern, right near our Cobham Daniel cabin.  It was a bit of a thorn in our side as it burned on and off for more than a month.  Of course it got quite close to the cabin right before it rained.  Aaron and I spent many nights and days at Daniel, doing the trips in reverse and staying with guests in order to keep an eye on the fire.  The MNR was quite busy with fires near communities and we were not much of a priority.  They did check on us every couple of days and supplied us with a pump and sprinkler system but we took it upon ourselves to make sure the fire did not come and take out one of our most popular cabins.   We had our own pumps and hose to continually keep wetting down the forest around and behind the cabin and ran water almost all day every day that the fire was active.  We also cleaned up all the downed trees and any other fuel that was around the cabin and hauled it farther away just in case.  It has been hot and dry so being wet all day working under the sprinklers was a relief.

The rain finally came and put 98% of the fire out.  We are supposed to get some more rain soon which should finish it off.  We also need some rain to maintain our water levels in the North.  The water has been dropping but just like the fires, it can all change in a short period of time.  🙂

Our guests had occasional smoke but generally the guests didn’t have too many smoky days while they were fishing. The wind kept it one side of them or the other.   We need to move everyone safely and do our best to do it in a timely manner.  I have been telling myself that we will sacrifice some flying time for some rain and not complain.

Fishing has been awesome along with this great weather, so everyone has been happy and understanding of the issues with flying and the fires.  The mayflies hatched during the first week of July and the walleyes have been shallow 4-6 feet but have started to move to their summer spots.  10-12 feet recently.  Pike slowed down a bit during the hot weather and were just feasting on walleye.  T-bone attacks were pretty common for a while with a few fishermen able to land 2 fish at once!

We have gotten lots of pictures from our guests who have been up recently and I hope to get some of them up on my blog soon.  We are hoping that we can get into a normal routine again after the fire part of the season.

Here are some pictures that I have taken during the last few weeks.

The fire is a living breathing organism.  It fires up some days and calms down others.  You can feel the air when it is a fire day.  The fire started NW of the camp by the rapids and went right by the camp and finished about 2-3 miles east of the camp where it continues to smolder in some big timber today. 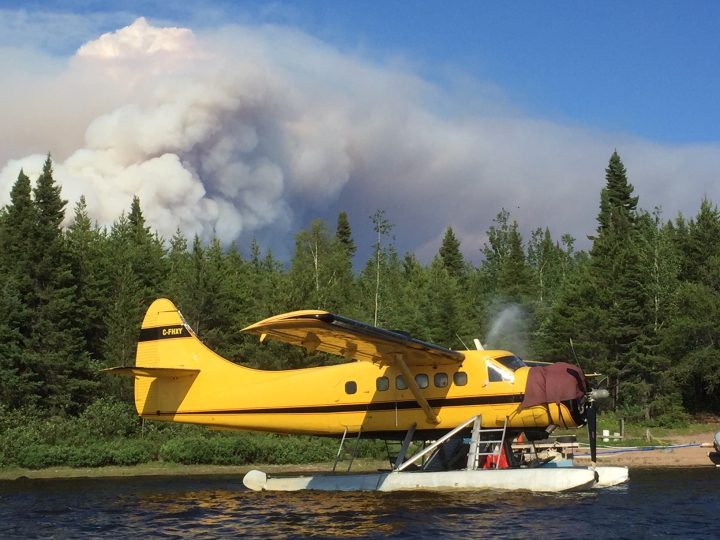 The fires around Red Lake turned into monsters and took a few cabins from some lodges and outposts and plenty of close calls.  It was pretty intense at times for many of the other outfitters. 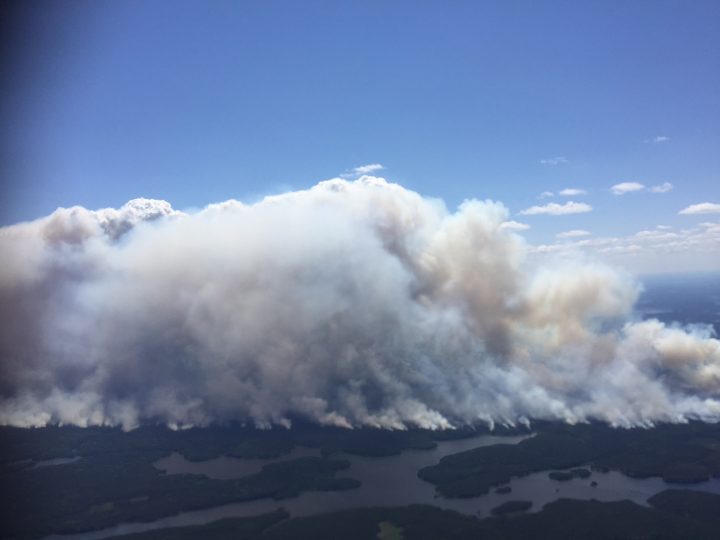 By each afternoon even on a calm day this is what the fire would look like. 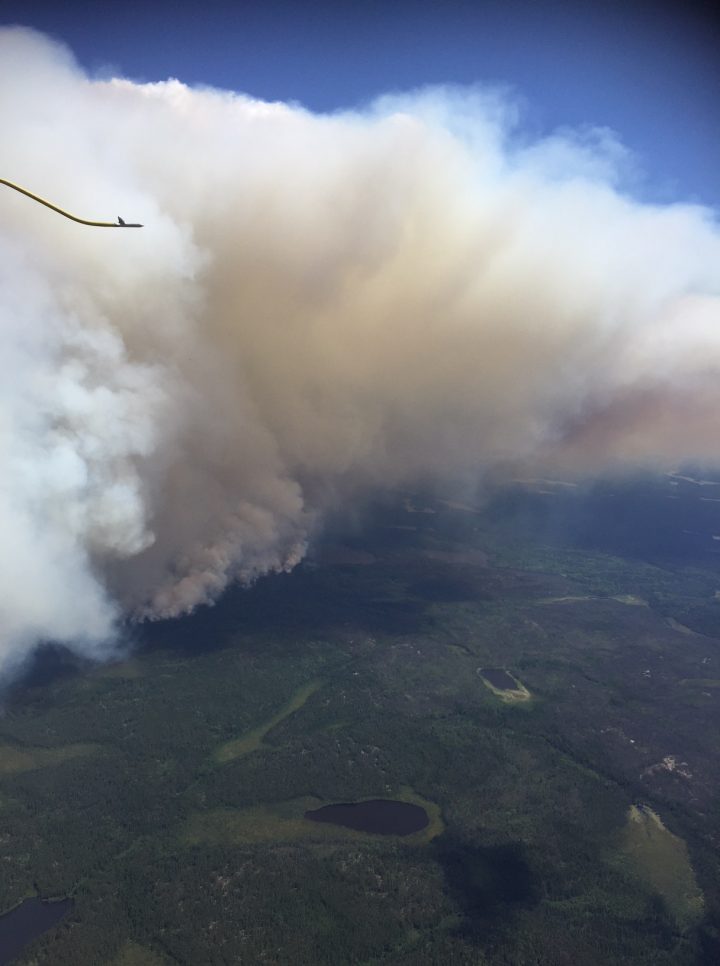 This was right behind the camp at Daniel as the fire was moving away. 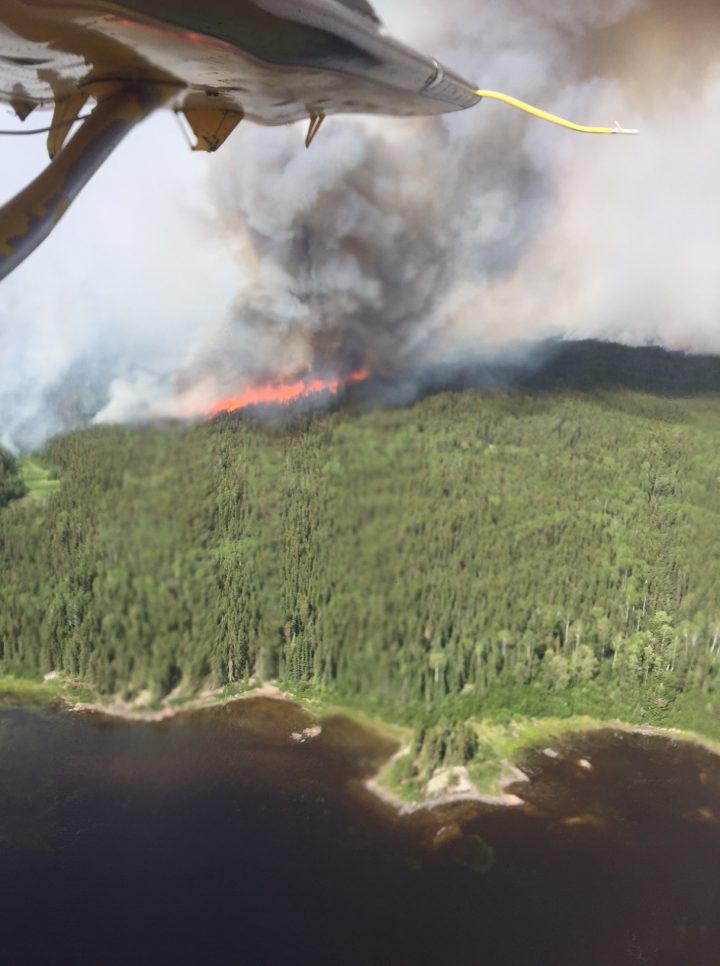 Then each evening it would calm down and let us have a couple of beverages and calm down.  It was a good lesson in patience and diligence that is for sure.   Being ready and preparing for something that you don’t know if it is going to show up.  Never turning your back on it, always ready to get back up there depending on the weather forecast.  Up there everyday and willing to stay right there if the fire came back to life, which it did every few days. 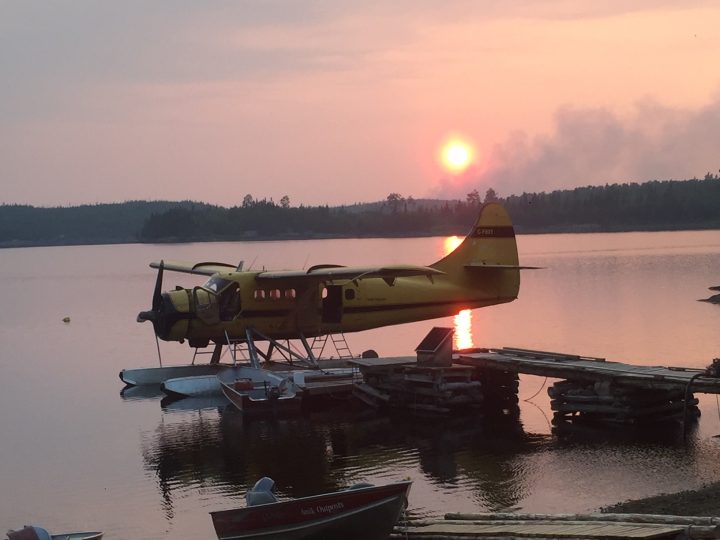 Then when the weather broke and it finally rained my buddy Eddie and I both got stuck up north one evening.  We were not able to get through the smoke and thunderstorms.  We ended up we3st of our normal track trying to get home.  With our experience, we know good places to get stuck.  We both had a load of guests but we found a full service lodge where they had a bed, food and beer.  All outfitters are competitors but we are all friends and look after each other.  They looked after us and treated us like gold.  We were very thankful and appreciative to Dogskin and their staff. 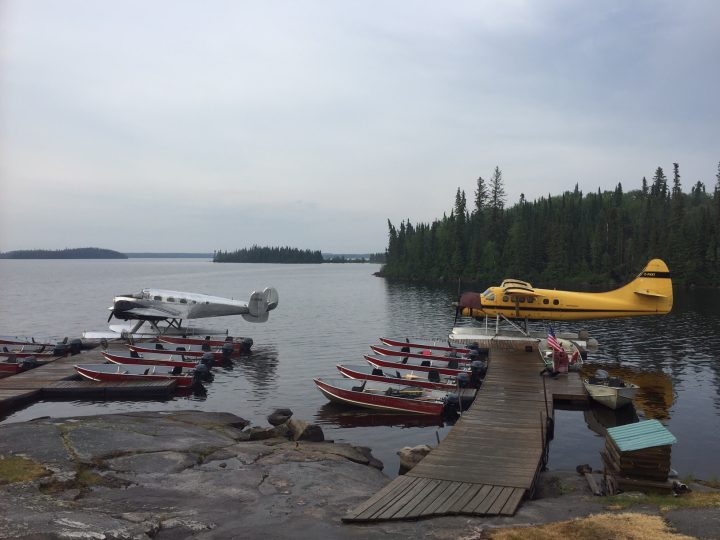 Of course the rain missed the far north and the Cobham fire survived for another week.  This was on my way north on the day we finally got the heavy rain we needed to put some hurt on the fire.  Racing a line of storms, the sky looks pretty cool. 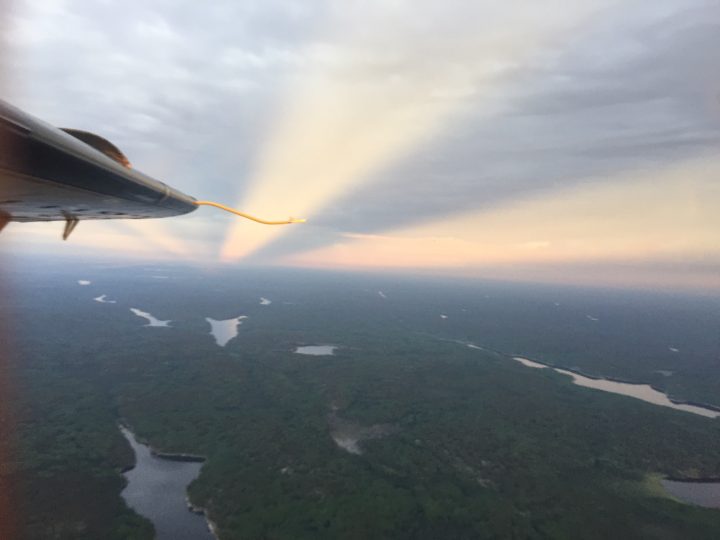 Once I got to the Cobham and looked back, we were not going home for awhile.  Sit tight and wait until it gets better before heading home….. 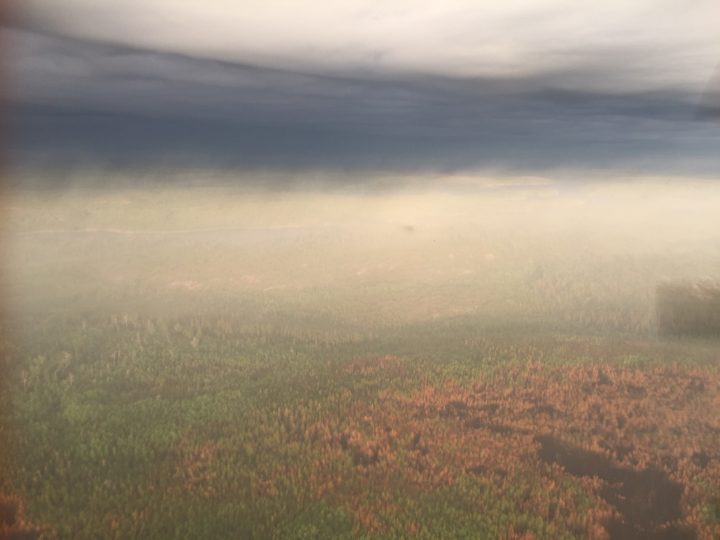 Daniels cabin is right in the middle of this picture, we are happy to say, still standing. 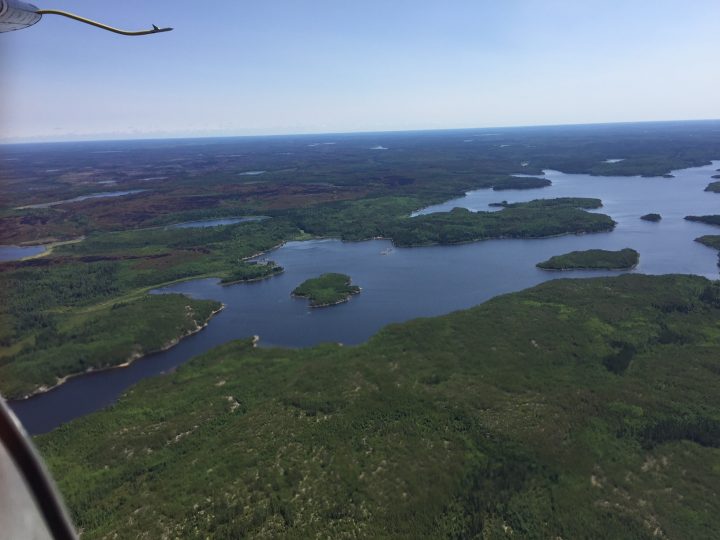