Operating in the Far North of Northwestern Ontario can sometimes get hot.  Our area east of Lake Winnipeg has been prone to forest fires since the beginning of time.  During the summer, thunderstorms pick up moisture from Lake Winnipeg and develop into storms right as they cross the border into Ontario where we have the majority of our outposts.  On hot dry years those storms cause some pretty big forest fires.

Most of the time they are generally pretty far from the camps and not of any real concern besides being smokey at times.  Unless you see flames there is usually nothing to worry about.

On June 27th our fishermen at the Cobham River had some evening thunderstorms come by.  On the 28th it was a beautiful day and they carried on with their last day of their trip.  At noon, they noticed smoke west of the camp.  By 3pm the fire had turned into a monster and was jumping the lake and heading towards the camp on the north side of the fire.  They called us, and we called the Fire center.  The fishermen went back to the camp and packed up what they could and were escorted through the smoke by a fire crew helicopter and were evacuated out.  We picked them up at the fire base north of Red Lake.

While at the fire base the pilots told me that the camp was most likely gone as the wind was still blowing towards the camp when they left.

We started to make a plan instantly on how to deal with this.  But no one could confirm it was gone and I was going near there the next day.  As I flew towards the Cobham at 630 am the fire was already raging, which is rare for that time of day.  As I got closer I could see it had split into 2 main fires and there was a break in the smoke and I could see through.  As I flew to where the GPS told me where the cabin was, I looked down and there it was.  The fire was only smoldering about 200-300 yards behind the cabin.  I landed and called the fire base to inform them that it was still standing and they sent a fire crew up there right away.  After waiting all day to hear whether they made it into the cabin in time to save it, we called.  They got there in time and were able to get a sprinkler system set up to keep it from burning.

They next day it continued to burn hard since it was in pretty old timber with big trees to burn.  As it continued east it ran into an older burn near the falls and slowed down considerably.  The next few days, the wind came out of the south east and took it across the northwest part of the lake away from the camp.  Then it finally rained!  Knocking the fire down to a smolder but it was only sleeping.  After a couple of sunny days the fire had a bit of life again…

Then we were fortunate enough to have another couple days of cool weather and misty rain and high humidity.

Today the fire looked like it was out.  Time will tell whether it is completely out or not but I know that the cabin at the Cobham River is pretty well protected in all directions for the extended future!

This whole event happened in less than a week!  Normally a fire is on and off again and carries on for a month or sometimes more.  We are sure happy that we got the timely rains when we needed them.

We were able to move the fishermen to an opening at another camp and keep everyone happy.  July 2nd the next group of fishermen were able to go back to the Cobham River and are coming out tomorrow.

Here are some pictures of the beginning, middle and end of the week. 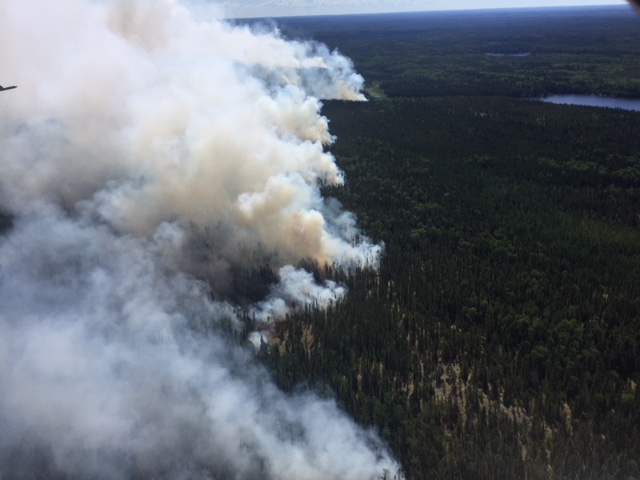 Our fishermen who were evacuated could not take all of their gear in the helicopter with them so Scott and I flew around the fire and were able to land in front of it and grab the gear fairly easily as it was pretty calm and the fire went straight up that day.  The sound in the fire was a loud, constant roar and crackle.  The flames were 50 feet above the trees as it roared through the big timber east of the camp and the smoke was up to 15 000 feet. 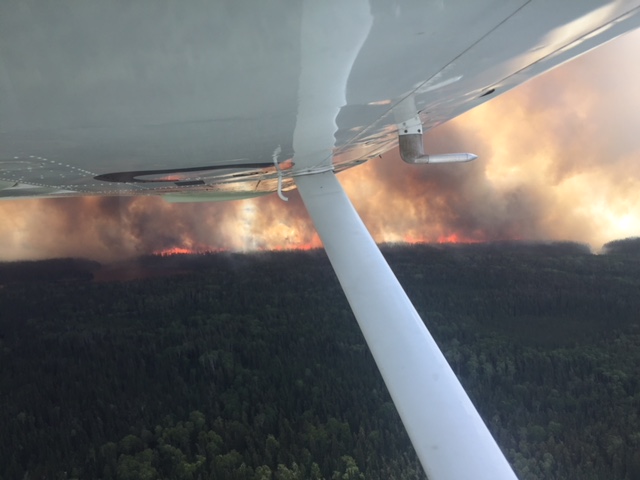 The fire moved very quickly.  The lake has a fair bit of burn on it but it also has plenty of green trees amongst most of the burn.  And the area right around the camp is pretty much untouched as you can see.  The only green area on the north shore.  The creek to the right of the cabin was the lifesaver as the fire calmed down right there during the fire night.  When the fire took off in the morning it went right past the cabin and only crept back against the wind. 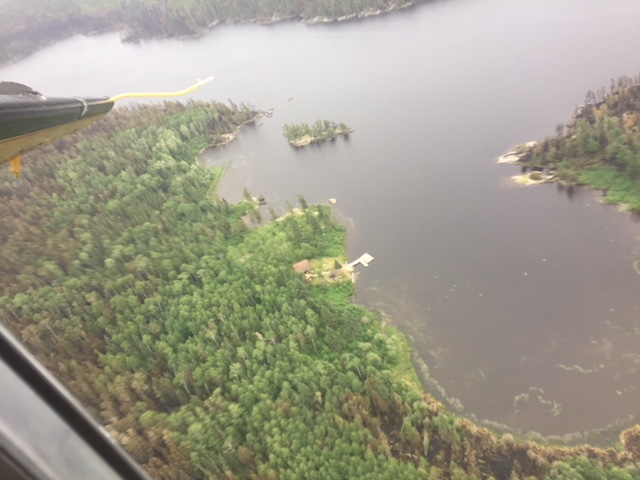 Nature needs fire to replenish.  There will be an increase in the moose population and there will be blueberries galore for many years to come.  The landscape has changed but the fishing never will! 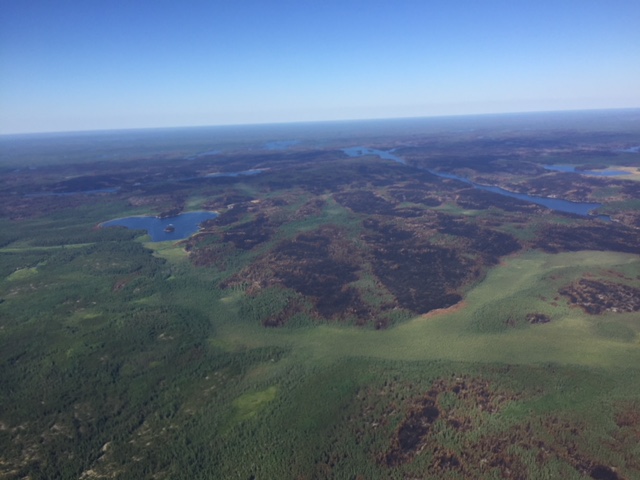