Another season is over.  It is always bitter sweet to see another season come to a close.  But as the weather changes into winter, Mother Nature is pushing us out the door.  The Otter will be put away for a much deserved break this week and Rena and I will be back on the Prairies soon.  2016 was a great year, Thank you to all of our awesome guests who made the trip up to Red Lake this summer.  If you do not receive our newsletter, please sign up by clicking here.  We will be sending out our end of season newsletter soon.

Hunting moose is no easy undertaking.  2016 was no different.  We tried to delay our hunt to coincide with the moon cycles to be closer to the rut and stay away from some of the warmer windy weather we sometimes have during an early moose hunt.  There was lots of moose action right from the first night of the hunt.  I have moose hunted for 23 years and have seen many different things, the rut seems to be hard and fast or long and drawn out.  This year it was long and drawn out.  The moose would rut 2-3 days a week, depending on weather,  You had to be in the right place at the right time, and had to make the right calls at the right time.  I believe the rut is still going on and the cows were not receptive to the bulls until we were done our hunt.  I always say, “These damn moose don’t go by the calendar!!!!

During the first week we had only 2 guided hunts taking place and on the first night one of our hunters got his opportunity(which during moose hunting, sometimes that’s all you get) A big bull came right to the call but it was a difficult shot and he missed.  Then the rain came….. for 3 days.  It was brutal rain and wind that never seemed to end.  After that it went quiet for the rest of the week.

The guy I was guiding had been with us before and had opportunities on his last trip but came up empty.  This time Mike was determined and patient, which was difficult during the 3 days of rain and getting wet each day.  We were diligent.  I know that you just need to keep going.  There has been many times that the last day is the day.  You just need to stay focused and be ready all the time.  Mike was definitely mentally prepared as we headed towards the last day of the hunt.

On the last morning of the hunt, it was perfect!  We were heading to our spot, sneaking in slowly to a spot where we had seen a cow moose alone a couple of days prior in the hopes that a bull was nearby.  This was the sunrise on our way in.

As we were quietly getting up on the rock to get set up I heard a grunt.  We turned around and Mike said, “There is a moose!”

Then I said, “There is another one!”

A bull was following the cow out into the lake about 300 yards away.  Then the adrenaline kicks in.  Mike trying to find a good rest in a hurry as the moose moved closer to us, trying to determine which was the bull and which was the cow as they came from the shadows into the sun.   At about 250 yards the bull presented a good shot.  Boom!  Miss, but they just stood there.   I could hear Mike breathing hard and I am sure he was shaking like a leaf!  I told him to take his time, take some deep breaths.  Boom! That one hit!  My next words are always the same! “Keep Going!”  Then the shooting gallery began.  2 more shots all hitting the moose at 230-225 yards!  The bull moved up to the shoreline and disappeared!!!!  Neither one of us saw him go down as we were trying to find bullets to reload.

The next 45 minutes were excruciating!  Waiting to see if he was still on his feet, listening intently, we never heard a sound.  We figured he went down but could not say for sure.  Once we waited long enough we went over to have a look, ready for him to stand up… 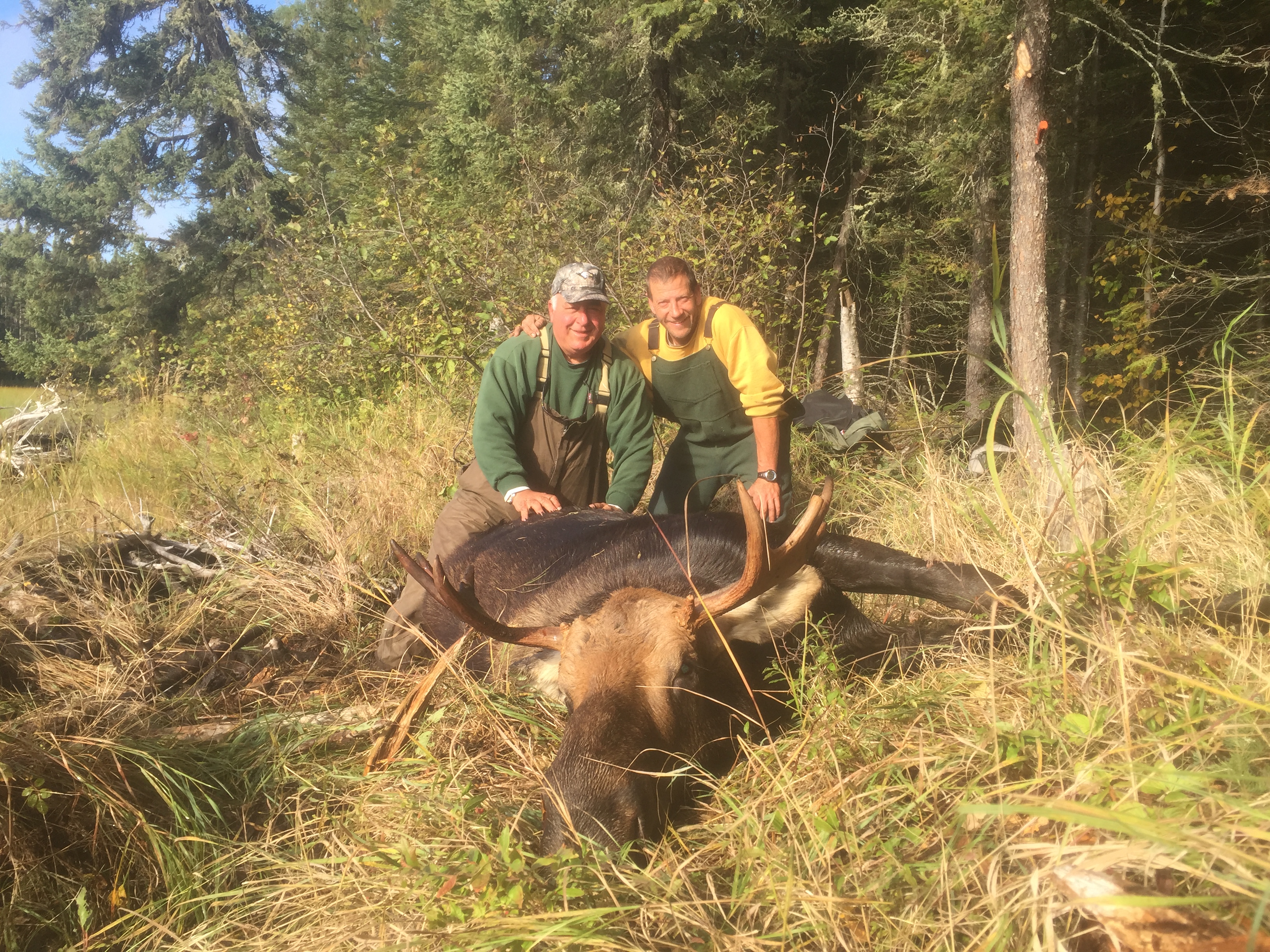 Last day moose!!!  Patience, persistence paid off.  13 days of hunting and Mike finally got the opportunity he had been waiting for.  And he finally got to wear the fabled moose hat! 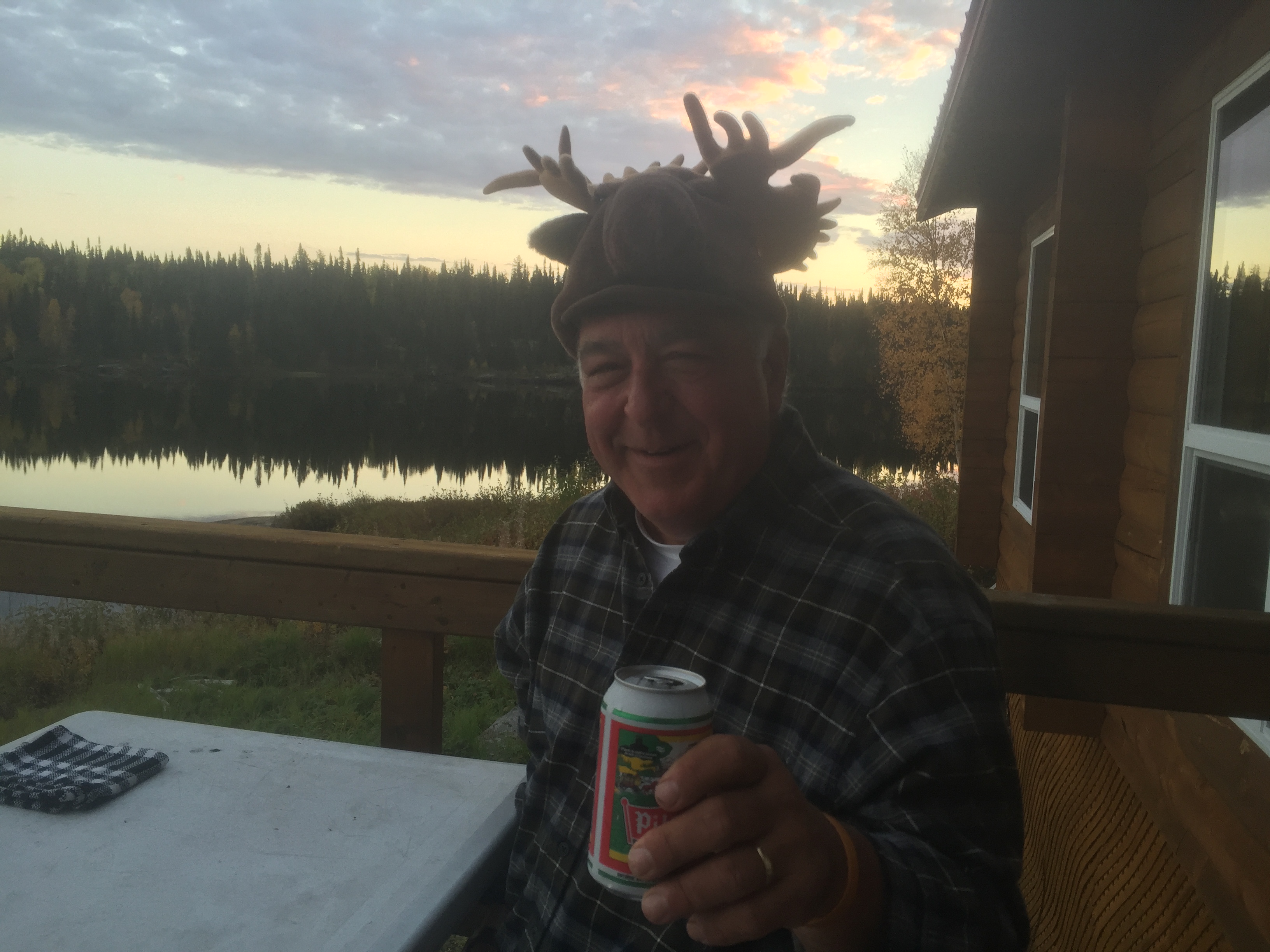 And of course Inside Loins for supper!!  Along with a little Jagermeister!

The second week of our hunt proved to be just as difficult but provided multiple opportunities.  We had 4 groups of hunters out and the action happened early in the week on some lakes and all week on others.

Our hunters on Findlay  lake were first time moose hunters and were excited as school boys on the way in.  Nick, who knows Findlay well checked out his first spot for sign.  As he got into the bush, he gave out his first moose call ever…  Then he heard a grunt and sticks break about 80 yards away!  He could make a out a huge bull moving through the bush towards him.  Let the leg shaking begin!!!  He called again and the bull kept grunting and moving closer, Nick said he was shaking so much he could hardly stand it.  The bull moved within 30 yards of him and stopped behind some thick cover so he waited…..  He never heard the moose again.  He was gone like ghost.  It is hard to believe how they can do that but believe me it happens.

They had more action the next morning in the same spot seeing a bull moving in the bush but never fully showing himself to get a shot.  As well during the week they were close to more moose, coming back to the boat after hunting all day and seeing fresh moose tracks right by the boat that were not there when they went in.  They learned a lot and I think they have the bug, they will be back to hunt those black monsters again!

Our unguided hunters at Shearstone Lake had been with us 2 years ago and were successful in harvesting a big bull.  They were back for more.  This year it was Nate’s turn.  Early in the week he was hunting near the cabin, walking in the burn he called all day.  As evening approached and he had not had any answers yet, he grunted very aggressively a few times.  He was right beside a moose.  A grunt and a few thrashes and he stuck his head out down wind from him…..  Just enough to get a shot.  He went down and Nate thought he had a looong haul out but realized he had walked in a half moon and was near the main lake so it turned out to be not so bad.  Here is a beautiful bull. 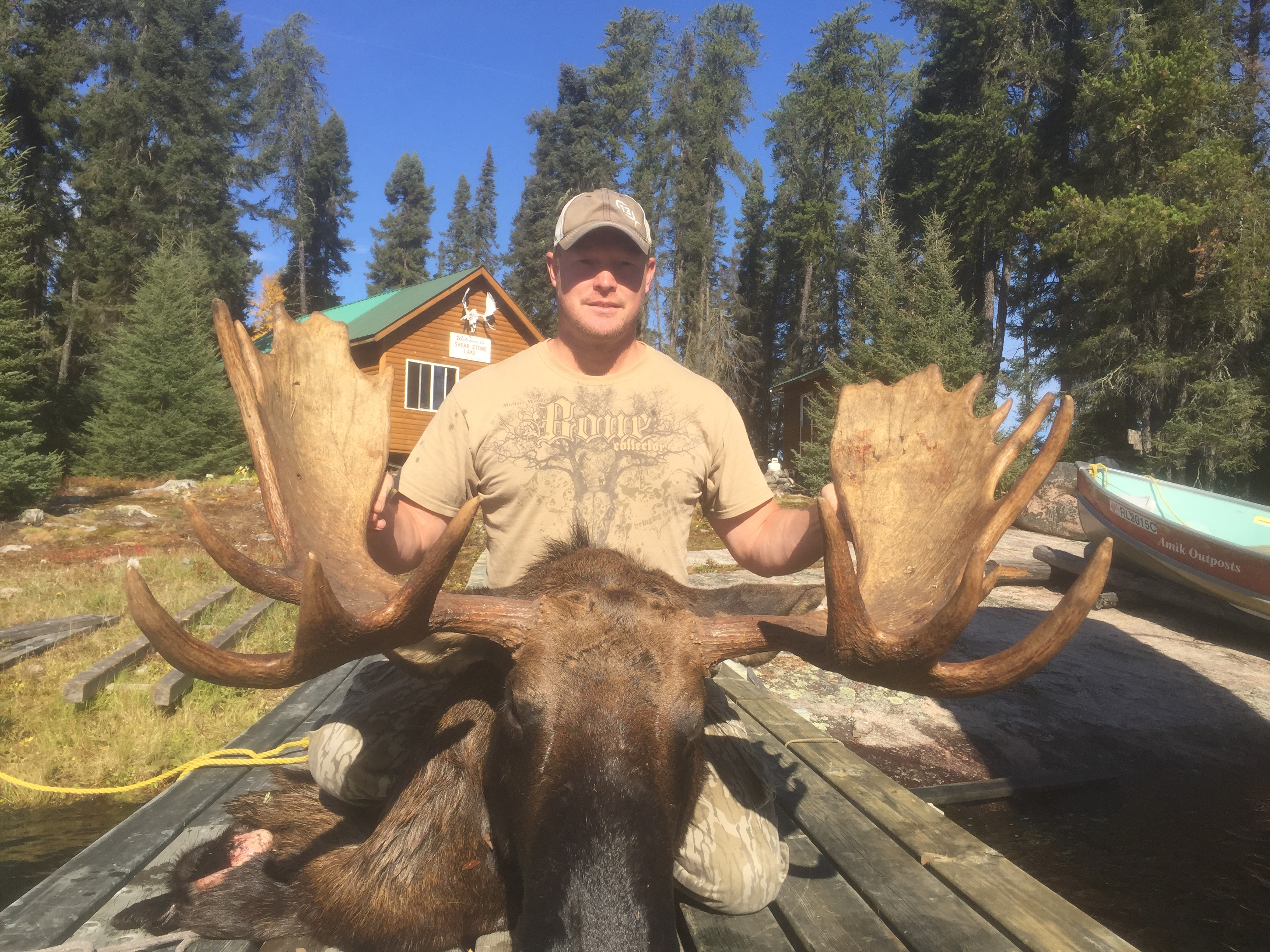 I guided Janet whom I guided 3 years ago and had an opportunity that didn’t pan out so she was back for more.  This year was tough.  We heard moose pretty much every day, from 20 minutes of grunting and not moving any closer to one to three grunts as well as a few cows calling.  One day we had something right beside us moving within a couple hundred yards but would never call back or move any closer.  Like I said earlier it was a long drawn out rut and the moose were in no rush to come out in to the open.  The weather was very warm which also drags out the rut.  Janet is alrady making plans to come back next year to chase the wiley moose once again!

It was a great hunt, all our hunters were happy to spend time in the bush.  Moose hunting is tough but so rewarding when you get one.

Here are a few pictures I took from the past couple of weeks in the bush.