Another moose hunting season has come and gone.  As always it was a tough hunt.  The rut began before our season started, then went into a lull during the windy weather most of week one, then the bulls turned on late in the first week and most of the second week which made for an pretty good season.  Throughout my 3 weeks in the bush, I saw quite a few cows but heard no cows calling and the bulls were very quiet.  Many one grunt answers and sometimes they could be heard walking around near us but not really showing much emotion.  And then after the hunters left I had a few days to hunt.  There was perfect calling weather and I hunted hard. All I heard was one grunt out of one bull, saw a cow for an hour that had no bulls near her and that was it.  Kind of a weird year of moose hunting but that is the way it played out.  I loved every minute of it and so did my hunters.

We took 3 Bull moose during this seasons hunt out of 10 hunters.  Not the best numbers but there was plenty of action to be had.  One group of hunters who did not get a shot at a moose were bow hunting and had one very close encounter with a bull that winded them eventually. And another hunter called in a 36 inch bull early in the week, it swam across the lake right to him, got up on the shore, shook off and walked away.  He passed it up as he thought he would have more opportunities.  He didn’t.  His hunt was a success in his mind but he would have liked to have that opportunity back. 🙂

The Thurston boys from Colorado are elk hunters but had never hunted for moose before.  During the first week of our hunt they had to have lots of patience and plenty of persistence.  They heard a bull early in the week for 3 days in the same spot.  He would not budge from where ever he was sitting but would grunt back.  They pushed into the bush on the third day and he moved away from them.  After a few days of letting things settle down the weather began to change.  On the last day of the hunt they went back where the bull was.  This time it happened.  This monster 52 inch bull moose walked out as Glenn was calling, Scott and Andrew took care of business.  They were thrilled to say the least! 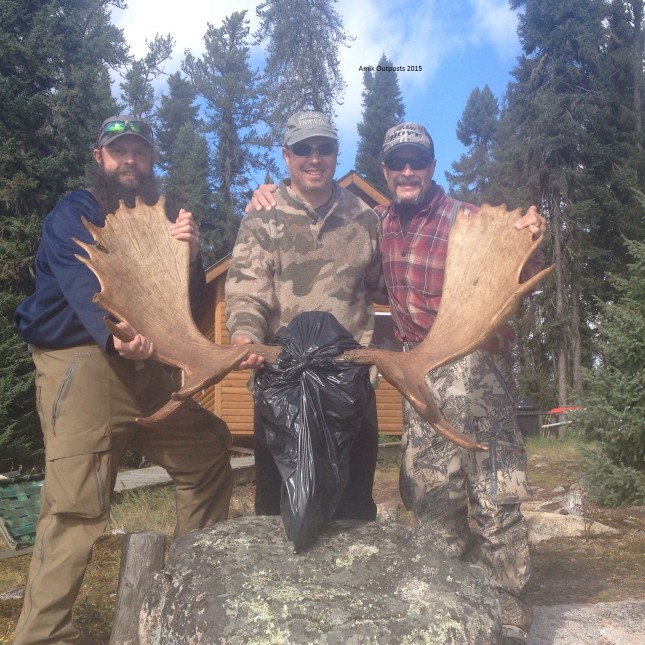 Here are some of the great sights I am fortunate enough to be able to work in everyday during the fall. 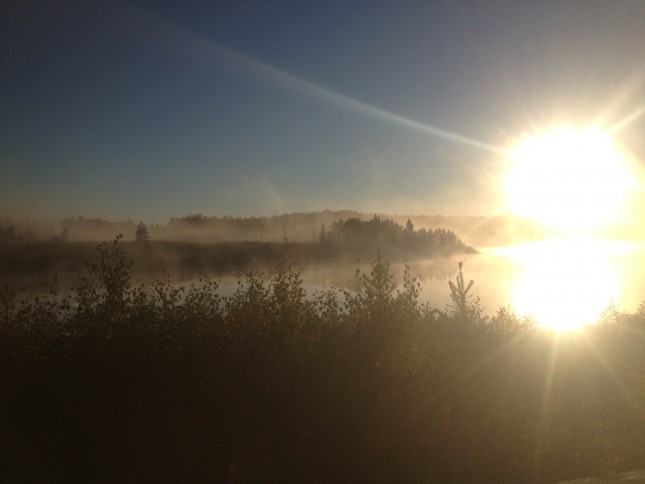 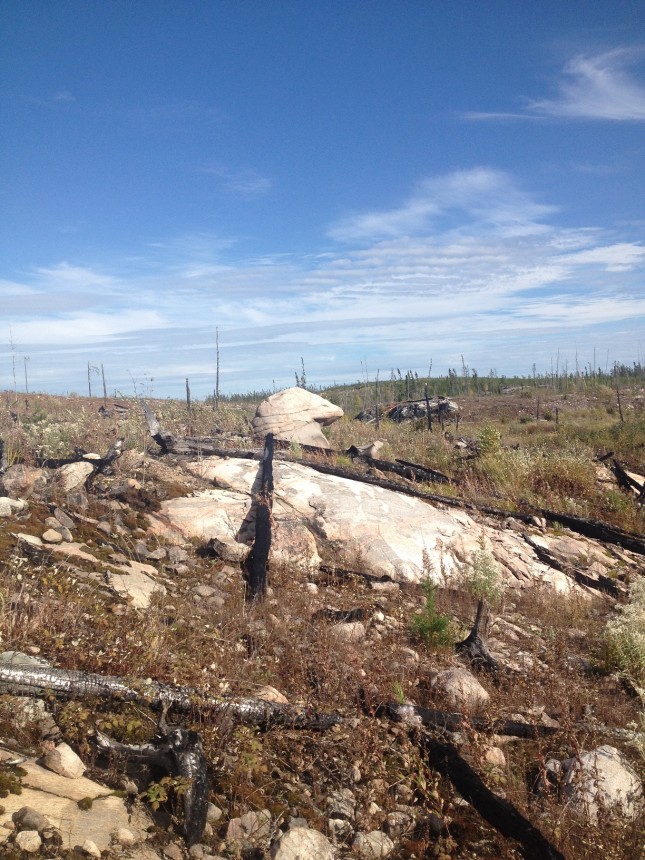 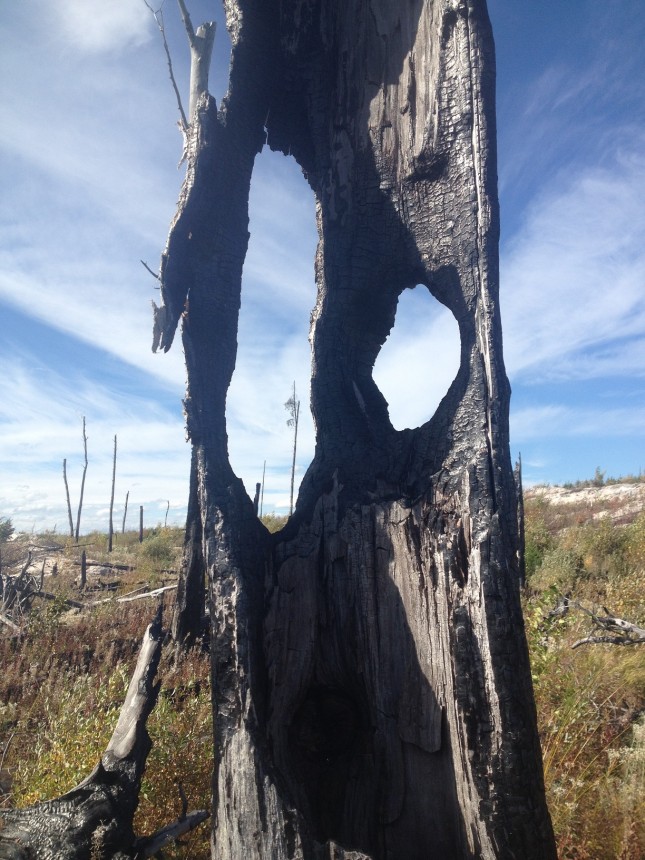 Where there is a cow, there is usually a bull.  During the second week of the hunt the moose were fairly active but not calling a lot.  We saw some moose from a distance and were getting closer and closer to them. 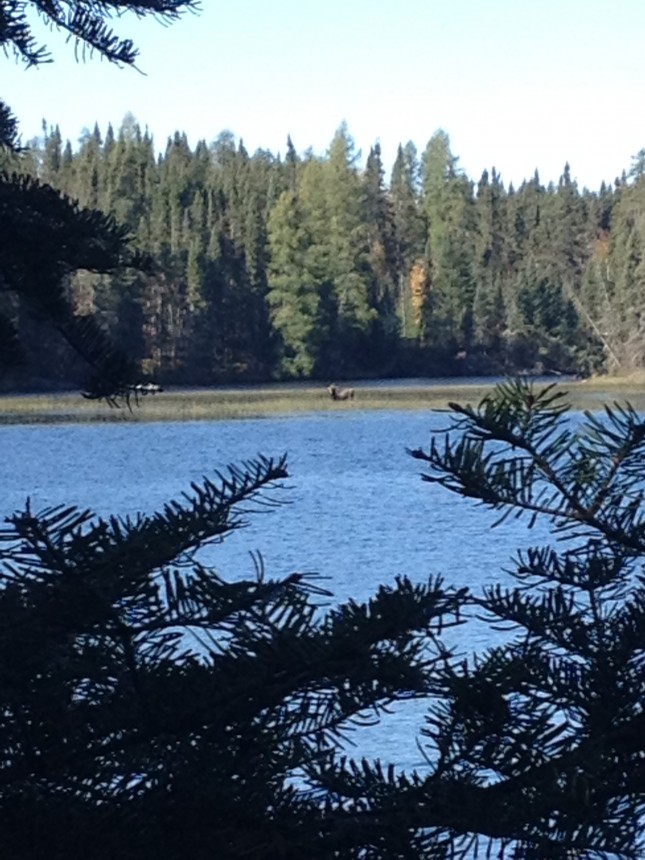 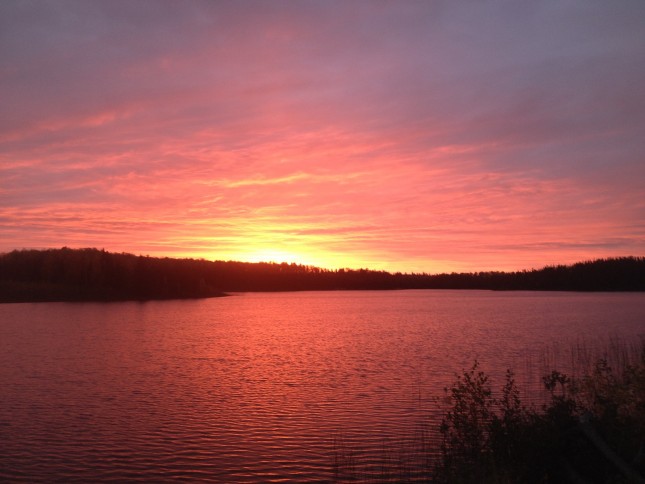 Bill M. has been a guest of ours for many years.  He will be 77 years old next month and is still going strong.  Bill knows how hard or easy moose hunting can be and if the moose gods want to put a young bull in front of you…. you take him. 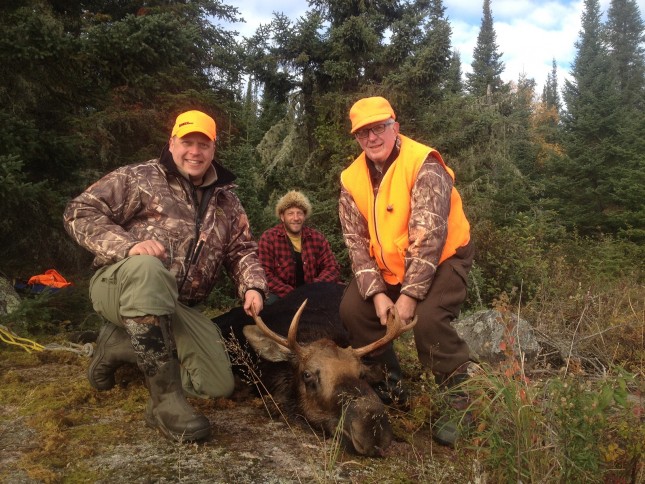 One evening, Bill and I were calling by the rapids on Loree Lake and I heard one grunt and some branches breaking around us.  After calling until dark we snuck out of there only to return in the morning to an area adjacent to where we were.  We snuck in, made 3 calls and then a grunt!   He continued to grunt, getting closer and closer. Then he stopped just inside of the bush like they always do, sometimes not ever coming any closer.  We were close enough to the shore that I was able to take a leak right into the lake.  The bull heard that and out he came!  He walked through the shooting lane quickly and then walked up on the hill slightly and stopped.  Then I called softly again.  The bull made a sound like a bark. A sound I had never heard a moose make before.  The call brought the 2 and a half year old back like he was on a string and Bill took an easy 70 yard shot.  It is nice to have them fall right on the shoreline.

Dustee always meets us on the dock when we come back from hunting with this look of expectation.  It is nice to bring her back some meat! 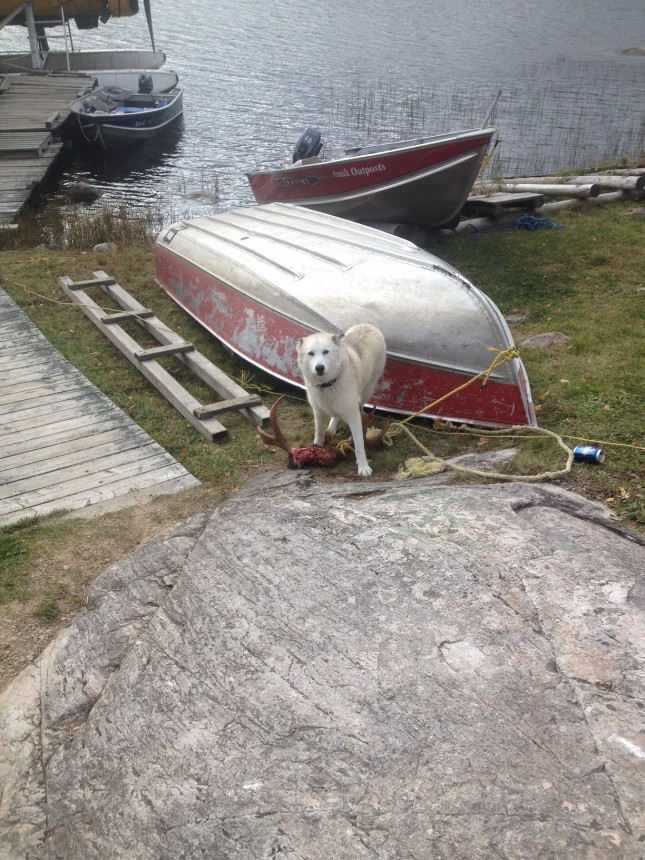 David and I settled in for the remainder of the hunt in search of another bull.  We saw a few moose far away but they wouldn’t come any closer and we continued to call.  Some spots where we had been calling for 2 weeks!  After seeding areas like that eventually a bull will be there when we are there.

That was just the case for David and I.  We stopped just at dark to call a spot near camp when we heard a huge crack!!! Over and Over for about 4 or 5 times.  Very loud and then nothing but eerie silence.  We snuck out of there once again making a plan for the morning.

We woke up to perfect moose hunting conditions, calm and clear.  We headed back to the spot where we heard the sound the night before. We set up and I started calling.  We got an answer right away and it appeared that there was 2 moose.  Sometimes if there is a cow with the bull, they can be very hard to bring out.  I continued to call and the moose came closer.  You could hear the hollow sound of his antlers going through the brush and we could see the trees moving as he got closer.  He was big.  Then just as they approached the shore they stopped, just out of sight.  We waited as our hearts beat out of our chest.  Then they started to walk away.  My heart sank, I thought the cow was walking away and the bull would follow.  I then had to change tactics.  I started to slowly rake my moose call on the tree and grunted ever so softly.  The bulls then became more aggressive and then we could tell that there was 2 bulls, not a bull and cow!!

The first one to show up and present himself was a beautiful 49 inch bull!  David took him down with one shot at 110 yards!  Very happy, we celebrated but then saw the other bull moving away.  As he got up on the rock to head back to his perch on the ridge we saw him.  The one we just shot was big, the one that walked over the ridge was probably in the 55-60 inch class.  He took one look back at us and disappeared. That’s okay.  He is there to spread his seed and keep the gene pool strong.  This moose was totally in his prime.  A beautiful trophy. 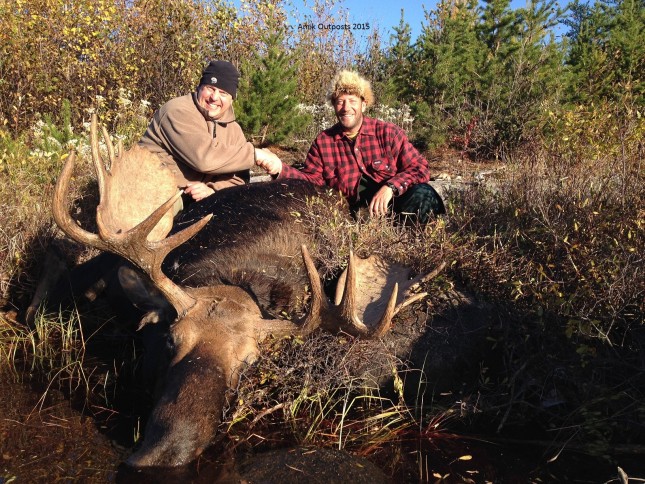 Bill and David have been fortunate when hunting with me.  The last 3 times we have hunted together, they have harvested 6 moose!  3 of them have been Trophy Bulls in the 50 plus inch class. True moose hunters who would be just as happy with a small moose as a trophy.  The hunt is all that matters. 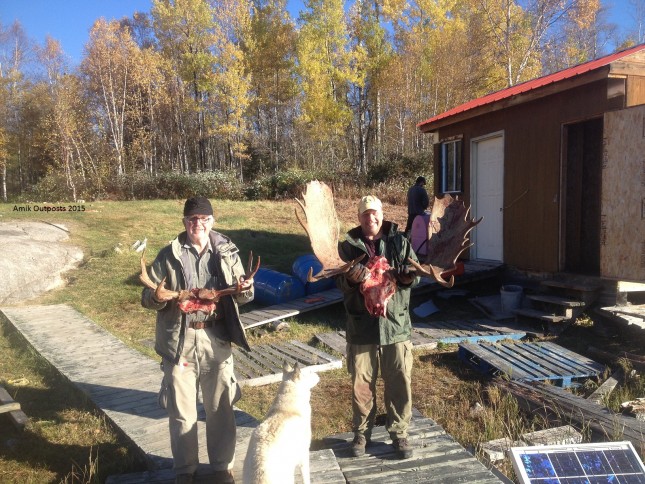 I did get video of both moose so keep an eye on my blog for the videos when I get them done.

If you are interested in Moose hunting with us next year, don’t delay we are booking up!