Moose season 2014 is done.  This year was a great one.  We had a large variety of weather throughout our 3 weeks of hunting as always. During the first week we had sunshine and temperatures that must have reached 80 on Wednesday.  The second week brought cooler temperatures and snow late in the week.  The third week continued to take us deeper into fall with snow on the ground every morning.  Overall it was good hunting weather with a few windows of opportunity to get close to those majestic beasts.

I always say that moose hunting is never easy….  except for this one time.  On the first morning of hunting with 2 guys named Mike, it was easy.  It was a perfect morning for calling and we got out there early, in our spot just as daylight arrived.  As the sun rose, so did a bull moose, coming right in as I wish they would every time I call.  He grunted all the way in giving the hunters a great experience, getting louder with each step he took closer to us.  Stepping out of the bush onto the shoreline 125 yards from us, presenting himself with the sun shining bright on him.  He glistened in the sun continuing down the shore towards us.

When he finally stopped, nothing needed to be said, the Mikes knew what to do.  Not too many times have I had it that easy.  After our celebration, getting the moose up on shore, we were just getting out the knives and we heard another one!

We had to move down the shoreline a ways to get into position and we knew it would be a longer shot but the guys had good rests.  I called a few more times and there he was 300 yards down the shore moving closer to us with the ever increasing wind in our favour.  Once he reached 220 yards he stopped and gave the boys a perfect shot.

Never before in my career have I ever been done guiding a hunt that quick.  Luckily we had this opportunity early in the week because as the week moved on the temperatures and wind went up and hunting would have been very tough.

It was awesome.  The videos of these 2 bulls are at the bottom of the page.  Watch it in a quiet place and adjust your settings on the video to 720 HD.  Enjoy. 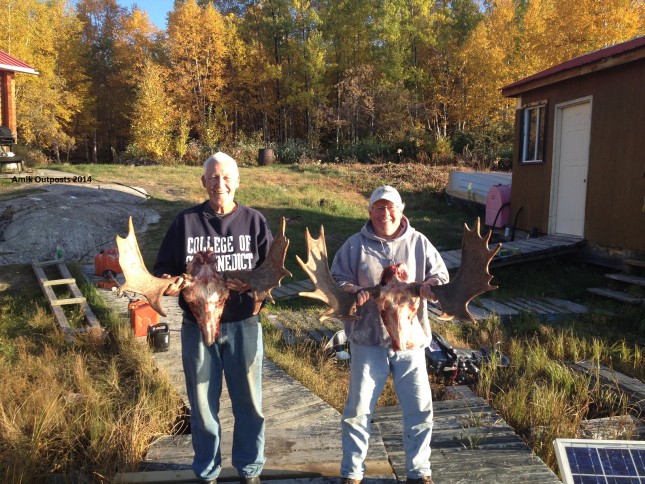 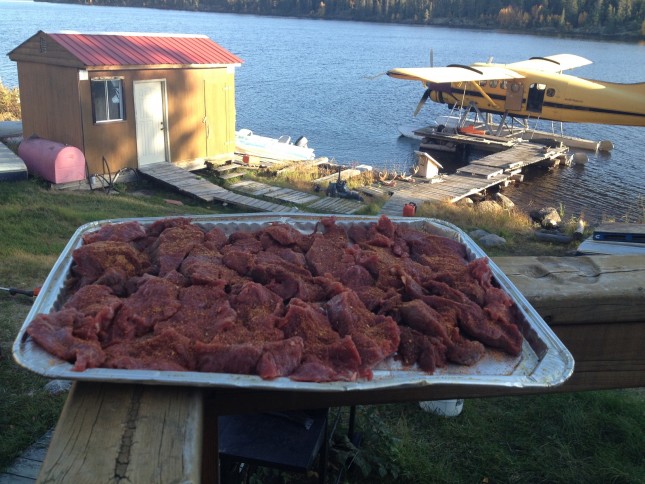 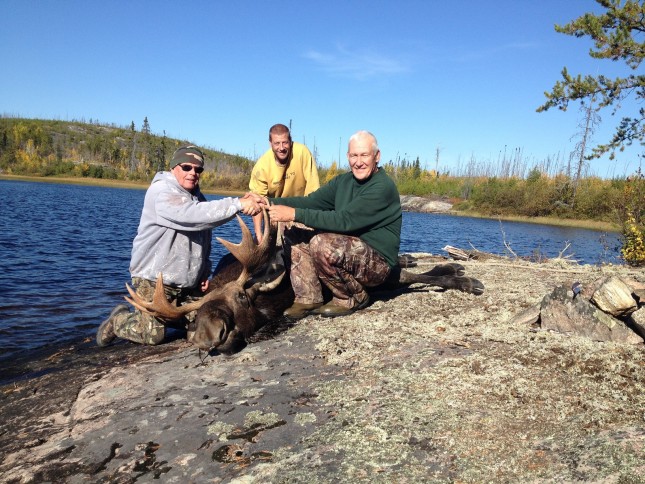 Also hunting the first week were some unguided guys who were hunting moose for the first time.  Dustin, Nate and Bruce are good hunters.  They scouted, found some spots to hunt and had patience.  Each hunter saw moose and gained valuable experience for the next hunt.  The successful one of the group was Dustin who called in this Monster Bull Moose. 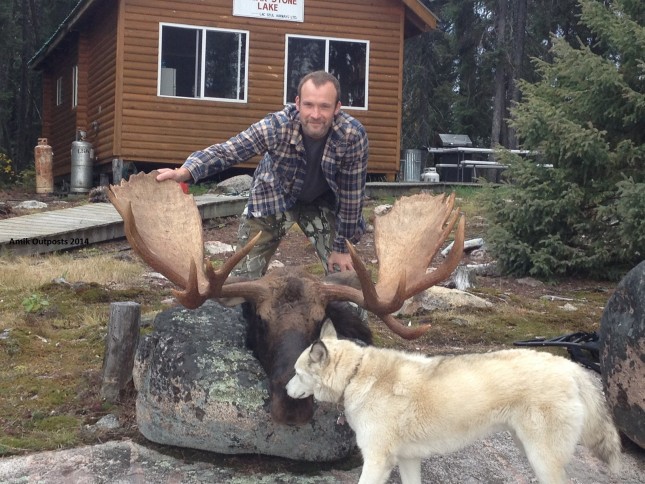 He said it came out 10 yards away and he shot it at 35 yards.  Needless to say he was pretty thrilled to experience such a close encounter.  They also now know how much work it is to get one of these animals back to camp! 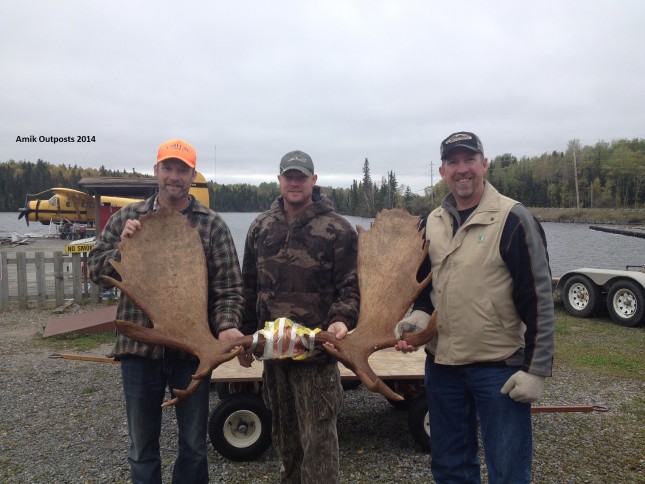 The second week brought us snow and wind.  I knew that this week was going to bring some action whenever the wind went down.

We had both guided and unguided hunts out during that week and Ralph K. was patient enough to take a bull moose during his hunt.  He saw a cow during his hunt the day before and knew if he stayed close to her a bull would show up.  He sat in the same area again and out came a bull on the second last day of the hunt. 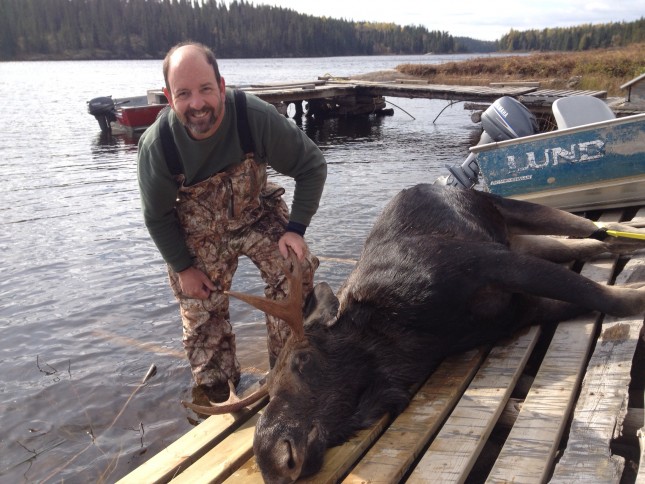 “I can’t say enough great things about your business. The outpost was fantastic beyond my expectations, the fishing was amazing and the moose hunting was both challenging and rewarding.

You guys are the best!

I am trying to put together a fishing trip for next summer. Hope to see you then.

During the 2nd week I was guiding an experienced moose hunter Jerry.  He has shot lots of moose with us and knows how hard it can be to get close to one.  We battled the wind for most of the week and got closer and closer to moose everyday but just couldn’t get them to talk.  As Friday approached it got colder but the wind was subsiding a bit.  We hunted in an area that we had never shot any moose but had some fresh sign in the area.  We arrived before daylight and called until 9 am not hearing any answers until Jerry said he heard a cow call back from behind us, so we sat and waited. And then I could hear a swishing sound coming towards us, as I turned my head, a bull looked right at me from 40 yards away and jumped.  Jerry heard him move and made a perfect shot when he stopped 50 yards away.  Every moose hunt is different and challenging.  Always rewarding. 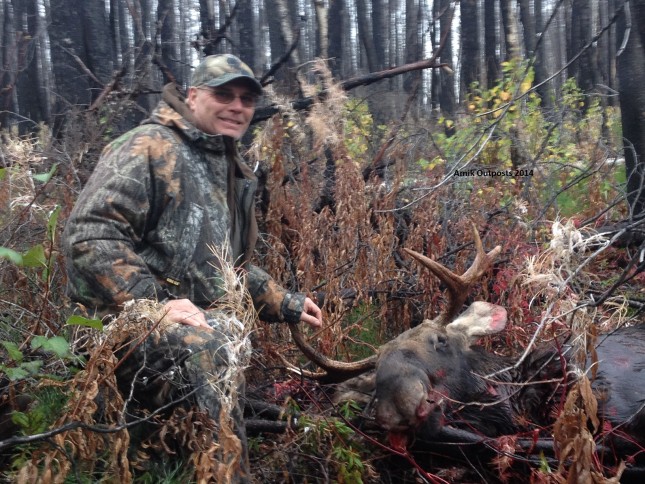 Dustee cleans the head to perfection.  She does an amazing job of cleaning all the meat and sinew from the skull plate. 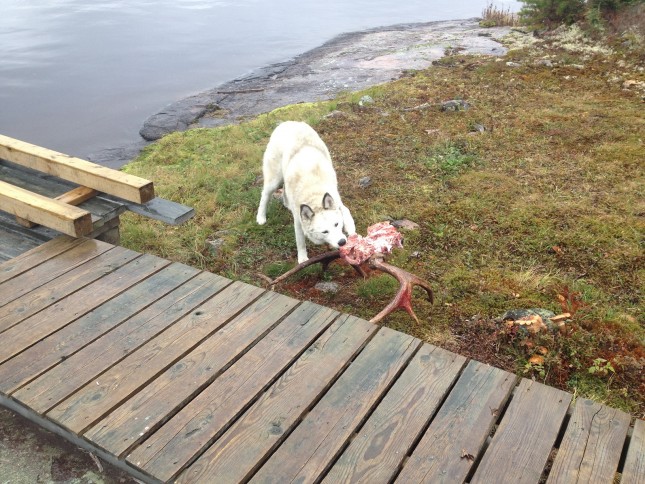 Of course Jerry got to wear the coveted moose hat! 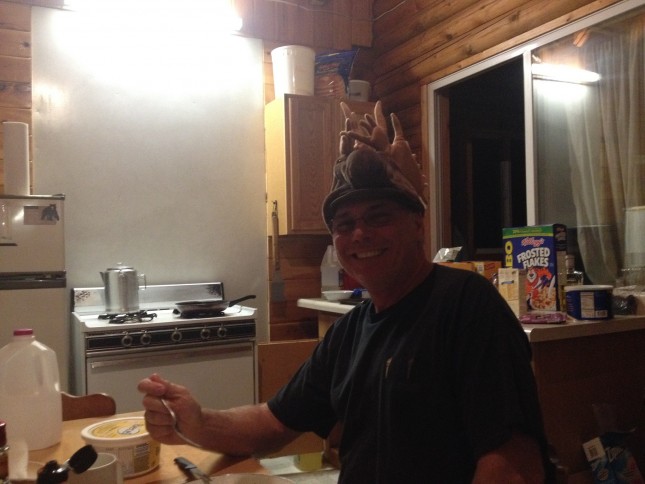 It feels great to wake up after you are tagged out to a layer of snow and wind that you don’t have to hunt in.  Your only concern is to have another coffee and keep the fire going. 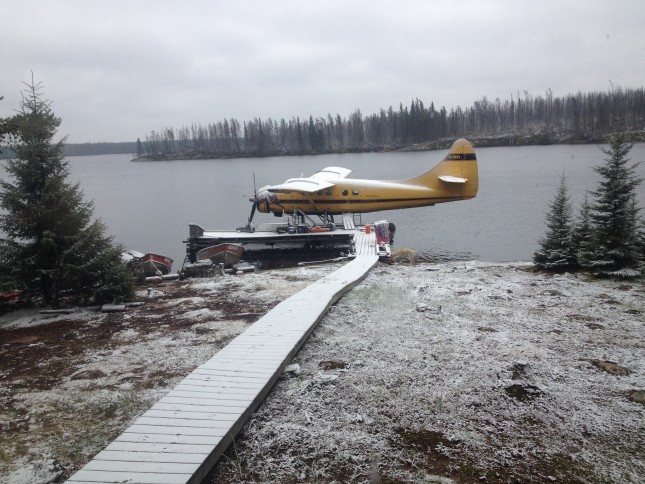 Heading into the 3rd week of hunting Bruce and Janet were our last customers of the season as they were last year and we came up short on harvesting a moose.  This year we were determined to have a different outcome.  Snow on the ground but still very unsettled weather continued everyday.  Lots of wind and snow showers.  On Tuesday we had a break as the eye of the low pressure must have been over us.  We had calm weather, fog, and snow periodically as I called quietly waiting for an answer. 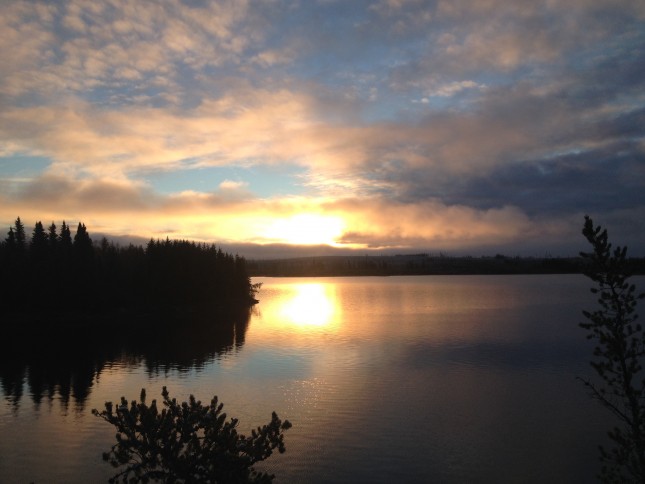 Around 11am, we decided to move to the top of a ridge  to call for the afternoon and glass the hills around us in the old burn.  Around 1 in the afternoon Janet spotted a bull over a mile away from us.  It was unmistakeable, 2 big white palms and a coal black figure in the distance.  He slowly started to make his way towards us down the ridge.  We had all day.

He disappeared into the valley and I kept calling quietly.  We didn’t know if he would show up or where we would see him next.  The wind was blowing hard enough that our hearing up on the ridge was hampered. We were also getting hammered with heavy snow showers every 10 minutes.  Sounds fun eh?

And then there he was, off to our left. He grunted once and kept moving.  He was in sight for 16 minutes as he slowly made  his way downwind of us.  Through the bog he slowly made his way around us, staying out 300-400 yards almost disappearing in the snow, but I kept a close eye on him.   He was determined to get downwind and we had to adjust at the last minute as Bruce couldn’t see him from where he was sitting.  We moved and Bruce used my shoulder as a rest to see over the trees and hold steady on the moose who had showed himself 125 yards from us.  Obviously the rest worked and Bruce took the 40 inch bull down with one shot! 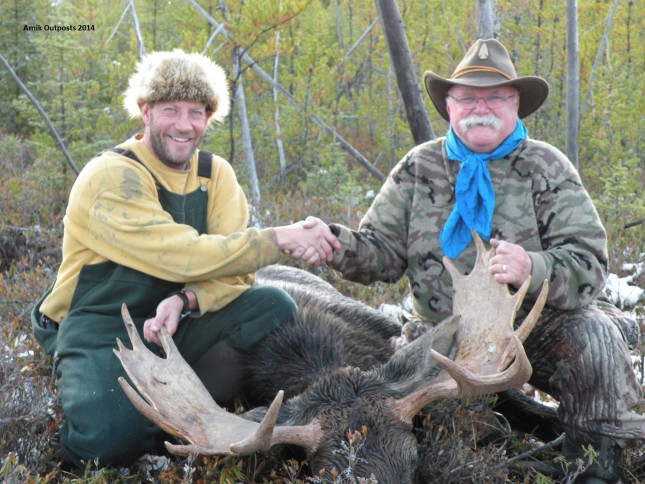 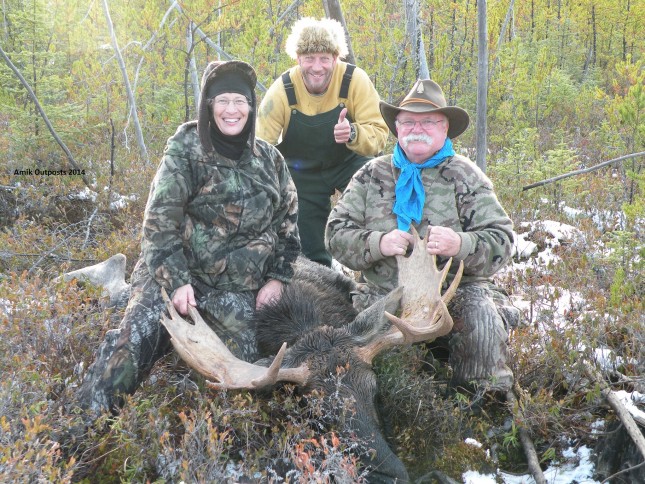 And after an all day haul from the other side of the ridge though the burn we got the moose back to camp at dark.  Having a late supper, a few cocktails, it is nice to wake up to a snow storm that you do not have to go out in!  The meat was hung in the shed cooling down and the cabin was warm. 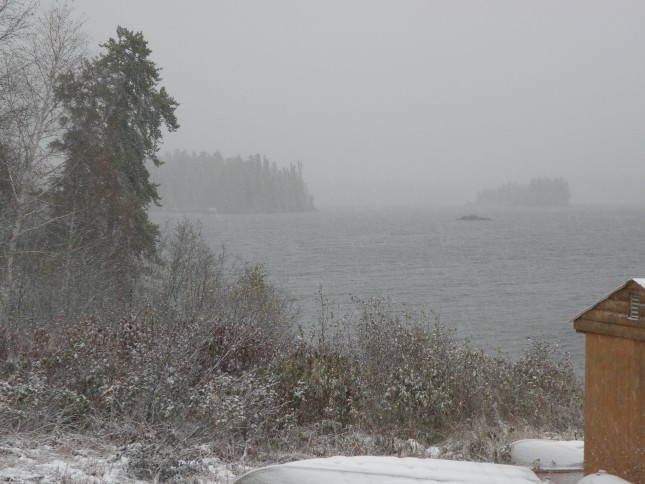 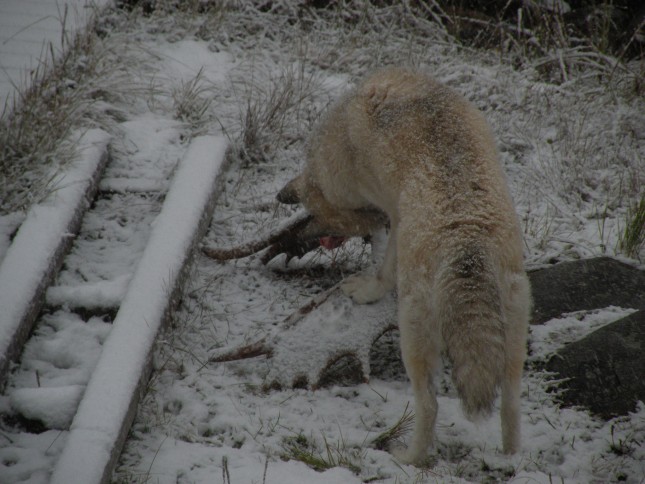 The video of this last hunt will be done shortly.  It turned out great!  Keep watching for it.