Our 2013 season is over.  It is always a bitter sweet feeling to see the last guests of the season leave.  We would like to thank all of our guests who made it up to see us for their vacation.

Our moose hunt was a success with all of our hunters but one heard moose and had action.  It was a late rut this year and it is still going on as I write this.  The first week of the hunt was our busiest with 3 groups of hunters out and it was our toughest.  Most of the action came on the last 2 days of the hunt.  Grant and Jerry got close to a bull and kept hunting the area every couple of days.  Then one evening they heard him.  He grunted over and over again.  They figure he grunted at least 200 times, coming closer then leaving and circling back.  Jerry has shot a number of moose and said that this one was the most exciting so far.  Jerry had to make a long shot but was successful! 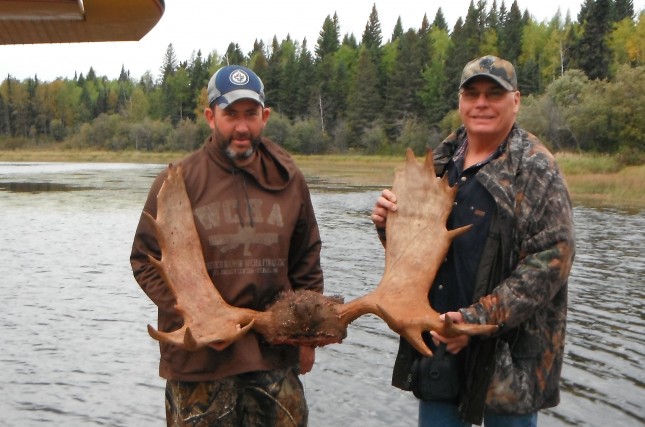 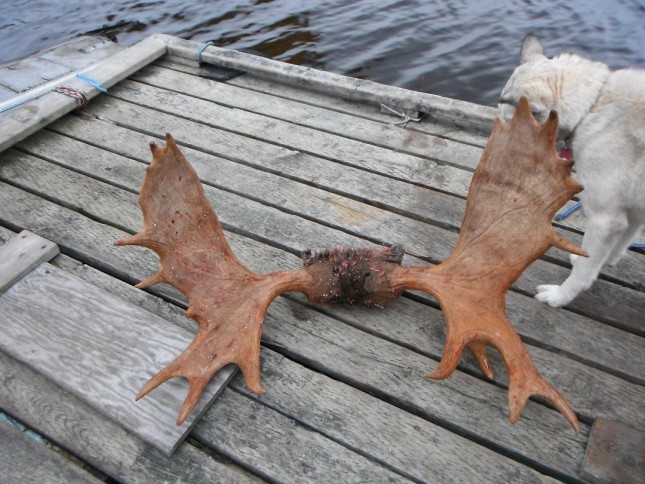 Our hunters at Shearstone had the most calling action of any of our hunters the first week.  They had 2 bulls calling for 3 days during the hunt but the bulls were hesitant to come close enough for a shot.  Having that kind of action may have hooked these guys. 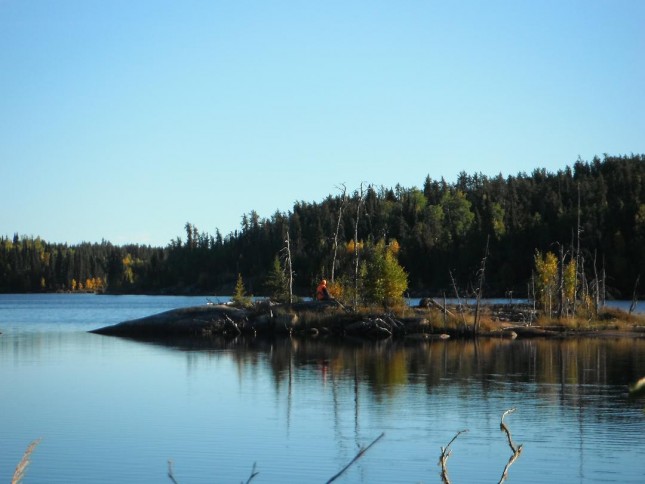 Bob and Eric were with me at during the first week of the hunt.  We had a few spots where we were close to some moose but the south wind we had for most of the week did not allow us to hunt those spots as much as we wish we could have.  We hunted hard, spending long hours out in the bush, on the rocks, in the valleys and on the ridges.  Bob and Eric were determined.  Then finally on the last morning of hunting the moose turned on!  We had one coming to us.  He came at us fast and got down wind of us quicker than we could get out of it.  He was within 100 yards and we tried to circle him.  He was close enough that we could smell him but when they want to be silent, they are like a ghost. 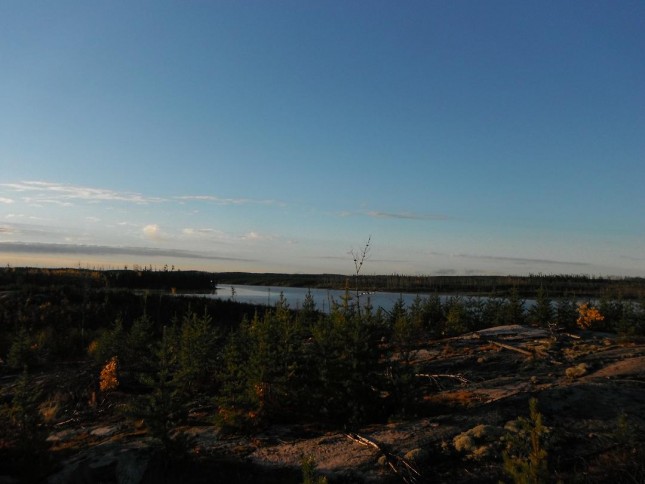 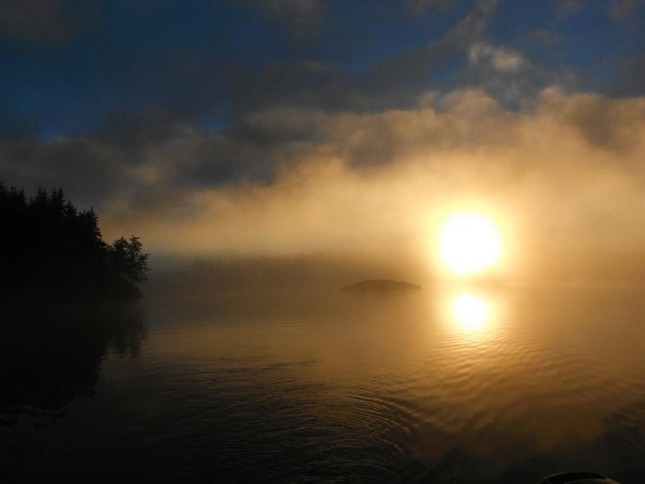 The heat and wind continued into the 2nd week of our hunt but the moose were slowly turning on.  The Hanson Brothers made their annual fall trip to fish and hunt.  Dick and I have spent  many hours out in the bush together and have seen and heard many moose.  This year was a strange one.  We had a perfect night for calling on the 3rd day of hunting.  As it was getting dark we both thought we heard one thrash of brush but couldn’t be certain.  We moved a little closer to where we thought we heard the noise.  And I could here the odd faint break of a branch.  Then a swoosh once in awhile.  It was hard to tell but it sounded like it was getting closer.  Then all of a sudden there he was.  No chance to do anything but take him.  This moose came in like a ghost.  Dick could not have been happier.

Daisy and Skip were as happy as Dick as they have been on every moose hunt with Dick through the years.  It is great to be able to spend time in the bush with people who love it as much as I do. 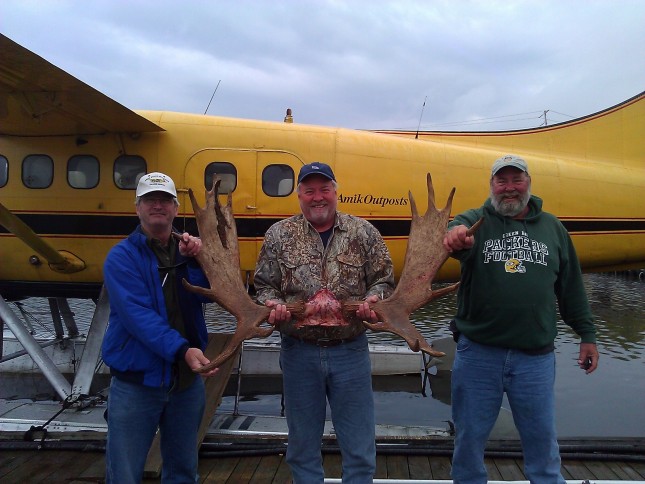 Our last week of hunting was our best in terms of action.  We only had one hunter.  Bruce and Janet came up together and are booked for next year already.  Janet was hunting this year and Bruce next year. We still had a southerly wind for the 3rd week in a row, but the forecast was for colder weather.  I knew the moose would be in high gear soon.

The first night we were hunting,  an answer!  Across the lake.  Then there he was, walking along the shore, grunting and swaying his antlers to shine in the sun.  He went fairly quickly into the water and swam to our side of the lake.  He was grunting all the way up across a ridge and straight to the bay where we wanted him to come out.   Constantly grunting, the bull seemed to get within a couple hundred yards and then just stopped.  He was grunting still when we left in the dark.  We would be back in the morning.  That same night at 10:20 pm, Kyle and I heard a bull right beside the cabin on the ridge, grunting and thrashing brush.  They were active.

When we woke up… Rain and heavy winds.  The moose seem to make a move right before the weather changes.  After the rain passed, on day 3 we were calling  up on a ridge not to far from camp.  Calling all afternoon, I had an answer at 3:30, but only once.  Then after another call at 5:30, I looked over my shoulder and there was a Bull looking at me.  A 45 incher! Coming off the ridge where we heard a moose 2 nights before.  Janet and I moved into position to cut him off before he got down wind of us.  We found a nice high rock and set up.  The bull was coming through the thick regrowth like a bulldozer.  He finally came into sight.  The new growth in this burn has gotten tall!  We could only see his antlers and head!  He stopped about 70 yards away for what seemed like an eternity.  Then he charged from the thick birch trees to the top of the ridge behind us, forcing us to move to manuvere for a shot in the thick jackpines.  As we moved to find an opening, he heard us whisper or smelled where we had been standing earlier.  Gone!  He was on the next ridge within 5 minutes.  We went back to hunting.  I had heard the answer at 3:30 from the opposite direction.  As we kept calling there was an answer to the north of us and then another off to the east.  I talked to both of those bulls until dark but couldn’t coax them in.

The next morning, back to the same spot.  The bull to the north was in the same spot not wanting to move but would grunt back at me.  The one to the east had moved but was still grunting as well.  Then we heard a howl!!!  The bull answered.  Then we heard many howls.  I have heard wolves before but the sound from these ones were the wildest I have ever heard.  The lead wolf was howling so loud that his voice was distorting itself.  They were on a drive.  They went on howling as they hunted.  Then….everything went quiet for 2 days.  We went to the other end of the lake shortly after hearing that.

Day 6.  We were hunting in a perfect spot near where we had the action on Day 1.  A nice point of an island with a perfect bay with a bay 75-150 yards in front and a view of another bay 300 yards behind us.  As we were calling, we had an answer right near the close bay.  As we waited for him to show himself, we heard another grunt,  he had moved to the bay behind us.  Janet and I had to move quickly and quietly.  He was walking out.  Janet had 2 shots at the 45-50 inch bull but in our quick move underestimated the shot, and shot too low.  Janet was fortunate for the hunt she had.  Hearing many moose, seeing a few and got very close to some as well.  Next year we will see what we can call in for Bruce.

I was able to get some video this year of our close calls but no kill shots.  I am going to be working with video in the next week so I will post it when it is done if it turns out.