As always, our trip was enjoyable, in spite of a little extra
precipitation. We look at our short treks as a visit with old friends,
even if we only see you folks for a few days once a year. Most of us are
a little long in the the tooth so it’s great to be around some younger
people for a while, though I did notice Bruce had a white whisker or two.

The new cabin at Dark Water is super. It was a pleasant surprise to see
the all new kitchen with new appliances, dishes and silverware. The head
cook (Russ) was appreciative but the dish washers complained because we
had so many new pots and pans and utensils that we had had to use them
all, every meal.

Again this year, there were no annoying bugs, maybe because of the rain.
I didn’t get a single bite, those that did only got one or two. No
mosquitoes, noseeums, ticks or deer flies. At first there was a few
carpenter ants but then they seemed to have disappeared as the week went on.

We were the first to ever fish Dark Water, I guess, on any kind of
serious visit. It was amazing ! 21 northerns over 30 inches. I lost a
lot of jigs because I don’t use a leader for walleyes and the northerns
kept biting off my terminal gear. I managed to put 2- 30 inchers in the
boat, fishing alone, with ultralight stuff and 6 lb test. I probably
lost 15 or more due to bite offs. It was similar for the rest of the
crew. Walleyes were plentiful, mostly around the rivers. The were a few
strays around the lake that we found as well. We didn’t get any giant
walleyes, seems like a 26 inch was the biggest but lots of good eaters.

Several moose were seen and a mama bear with her 3 kids was seen and a
couple others, including one that swam across the river. Happy was able
to get several pictures of the swimming bear.

We’re already discussing next year’s trip. Thanks again for your efforts
that make our stay a memorable and fun trip. 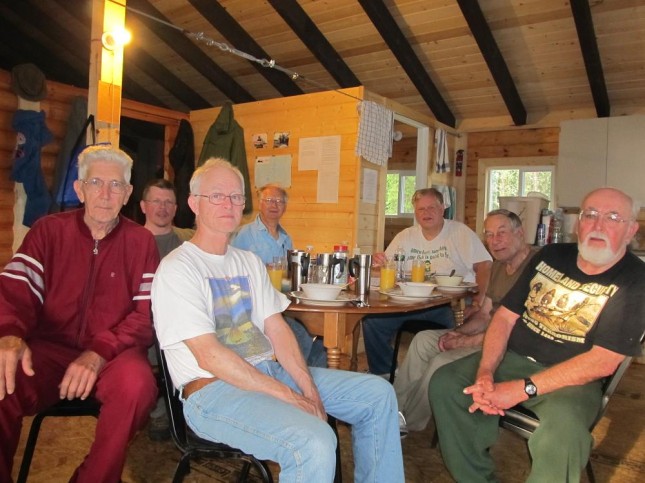