People are happy, weather is great…most of the time.

It has been quite warm up here in the north, but not too warm. Temperatures have been in the 80’s at times but most nights have been cool and good for sleeping. Every morning the weather has been picture perfect but by the afternoon the clouds build and we have had showers and crazy thunderstorms. The Langeland group got hailed on as they were racing back to camp one day on Blackbirch. Water levels are staying at a good height and I saw the first leaves beginning to change yesterday at Vee Lake and Cherrington. You know what that means….Moose Hunting is getting closer!!

Here are some pictures from the Birdsong party who fished Shearstone last week. They had a great time, mostly stable weather and caught quite a few fish. Their first flyin trip so they learned a lot and got the hang of catching fish up here. They are already looking forward to their next trip! The largest walleye was 26 inches and the largest northern was 39 inches with many in the mid 30’s. They had many northerns attacking their stringers attached to the boat and even had a 48-50 inch monster pike come right out of the water and totally rip a fish off the line just as it got to the boat! And not seen again! These guys fished hard. Although in this first picture Randy and Cody seem pretty relaxed. 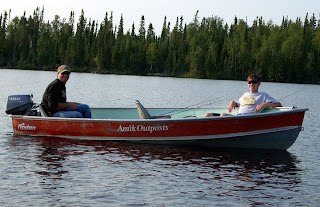 Back at’er after the rain. It is great to get back out fishing in the evening after a storm. The air smells so fresh. 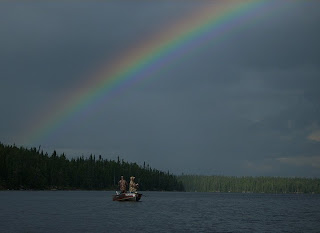 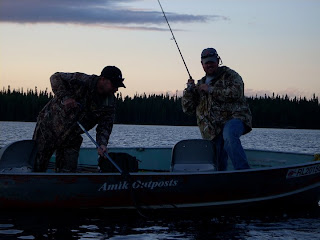 I love these pictures when the fish did not want their picture taken! 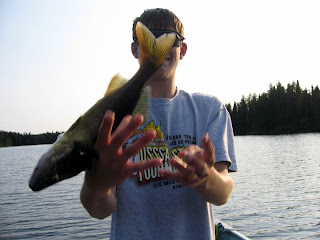 Randy with a nice walleye. 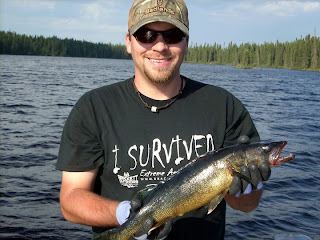 And Randy with a future trophy! Unless someone eats him first! 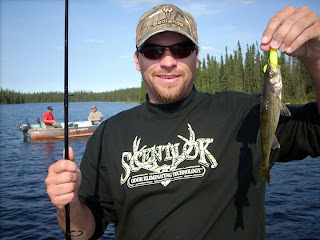 It seems that I see the same face holding the biggest fish! Ryan caught some nice ones. 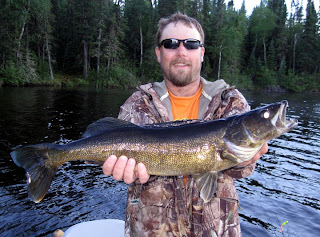 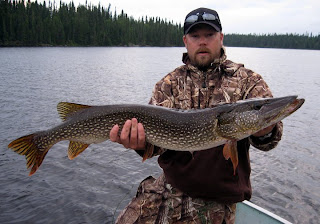 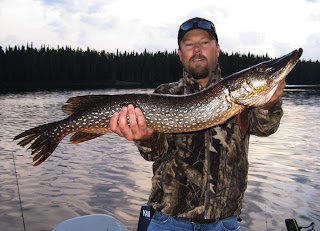 Here is another trophy northern pike from Blackbirch lake last week. Jack W. is 17 years old and showed the old guys how it is done with this 41 inch Pike! The Patnode party tries a new lake every year and this year they were quite happy on Blackbirch! Young Bob caught a 27 inch walleye and numbers of fish were nuts! 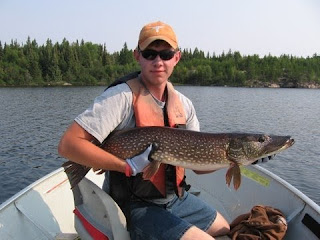 The Pfeiffer party made their bi-annual trip with us and had their first experience on the Cobham River system. It was a great success! Tommy caught a 43 inch monster pike just outside of a nice weedy bay in some deeper water. It is nice to hear that for his graduation present next summer, Tommy wants to come fishing with us! Spending time in the north is something that has to be experienced to appreciate. There was a fish hook incident during their stay involving a fiesty northern pike and alarge treble hook! I never heard about it until we were back in Red Lake but the hand that was hooked looked very good and only had a small wound! I will post those pictures when I get them. Make sure you have pliers that can cut a hook!

The Toft Party fished Cherrington again recently and caught lots of trophy fish. Fishing on the big lake was very good. Jim was the walleye master catching 6-24 inch walleyes ans Sam was the northern pike King, catching and releasing a 41, 40.5, 36.5 and a 33 inch northern. They will be back next year to see if they can better those numbers!

The Cleave party came out of Vee lake and had some Big fish stories! Jane who is a tiny woman caught a 42 inch huge pike! Her husband Frank said it was comical to see her trying to hold such a big fish for the picture, I will post that one when I get it. Jane was holding onto the big walleye title too until the last night, last fish…Frank`s last fish of the entire trip on the last night was fat 29 inch walleye!! What a way to end the trip.

The Haldrup party fished Findlay last week and had a great time and great fishing. They commented on how many walleyes they caught between 20 and 23 inches. It was an awesome trip with some unbelievable walleye fishing. Findlay is a very easy lake to fish with not very many rocks. The largest was 26 inches.