If you want to catch Big Pike, you need to come fishing in May! More often than any other time of year we have 40 plus inch fish caught and released at all of our outposts. This year, even with the early ice out the big ones were still up in the bays sunning themselves. The weather is always a question in May but you just have to be prepared for every type of weather if you want to catch numerous Trophy Fish!

The Collins family went to the River for the first time and had a great trip! They have been fishing with us for 10 years and have fished a number of our lakes, and I think they have found a new favorite! Everyone in the group caught at least one northern over 40 inches, and 15 more from 36 to 39 inches. Walleyes are a pest to these trophy fishermen but they were aggressive and hit some of their biggest lures in the box! They always say they catch enough walleyes by accident to eat!

Here are a few pictures from their trip. 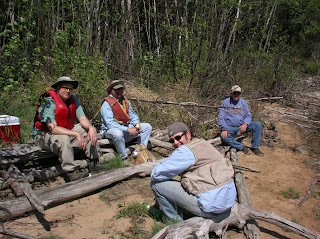 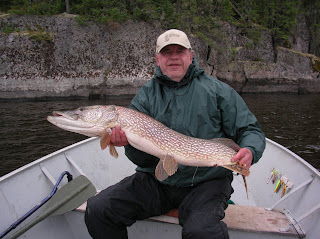 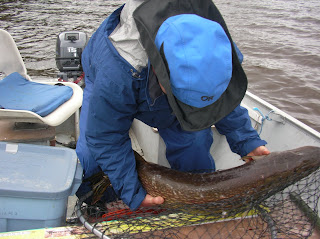 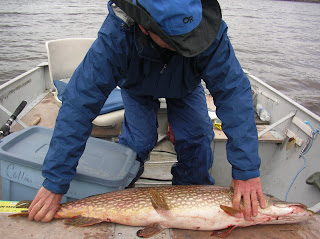 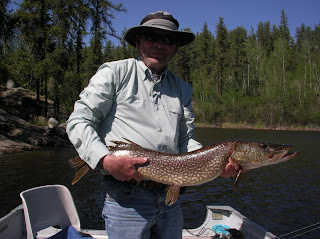 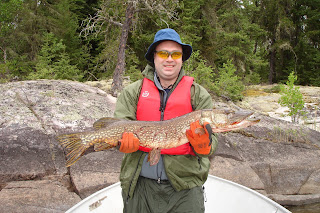 Cobham Daniel had the Millhollin party who usually come to the Cobham as close to ice out as possible but this year came the second week. They caught 3 northerns over 40 inches an absolute ton of wallyes. A good trip despite a few windy days which made it hard to fish where they wanted. Mike K. is coming on a moose hunt with us in 2011 and getting very excited already. Hopefully I can coax a big one in for him!

Cobham Morley. The Mirick Party. One good doctor and his tough Pike Hunting boys. This year Mats and Patrick brought along a couple of new guys to experience the Cobham. They had an awesome trip catching two 40 inch northerns and 20 over 36 inches. The Rookies caught the biggest fish with Mats catching the most. They will be back next year loaded for the big ones!

Vee Lake has Northern Pike that are as big as a Sturgeon! The Johnson party came back as usual to fish their favorite lake, Vee. They are experienced fishermen and always do well. This year was no exception! Walleyes in 2010 were crazy! Catching over 200 in one short day for 3 of them. Barry who has fished with us for 21 years, was fishing by himself one day and hooked a big one! So big he did not even attempt to try to put it into the net. It would not have fit! He had it up to the boat a few times but could not get it tired out enough to attempt a grab. Barry estimated the length by noting where the nose and tail were adjacent to the boat. It was 57 inches!!! We have heard stories every year about the fish seen but not landed and this was a good up close look! Maybe we will see this monster again!!