Everyone is thrilled with the quality of fishing!

Another weekend has come and gone. The weather made it interesting once again. Delays and lots of waiting people. One consolation, on my arrival at each camp I saw big smiles and got to hear stories of great numbers of fish, big ones that were caught and some that got away. With the weather delays we did not get many pictures this weekend but will share them as they come in the email.

Orin S. pictured here caught this 40 inch Monster on Vee lake last week on a Lindy Rig. He was very excited when I finally got to Vee to pick them up a few hours late due to the weather. He fishes with the Evans Party who have fished Blackbirch for as long as I can remember but really loved the fishing on Vee this year and will be back on the Vee water in 2011. 50 walleyes over 20 inches in 4 days! 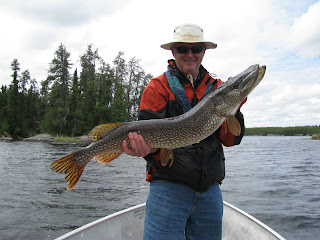 We have another group with the name Evans who named a spot on Vee “Penis Cove.” Fishing in Penis Cove was awesome this week. 🙂 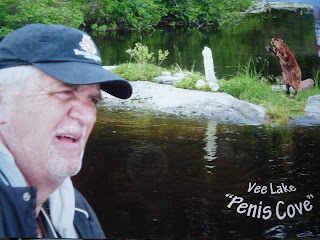 Here are some of the other fishing reports:

Springpole lake doesn’t get as much attention as the some of our other lakes but the fishermen who come out of there are always very happy. Football shaped walleyes in that lake. The Bunt/Alesch group loves Springpole and this year they had the best fishing they have ever experienced. Chad caught a 25 inch walleye and Chad Pat and Doug each caught a 38 inch northern during their stay. The comment on the waleyes was “they are fat…right to the tail.”

The McConnell party fished Blackbirch last week and had “fantastic fishing.” One day they had over 200 fish after 2pm for 2 boats, and the leader of the gang, Gary caught a 38 inch northern.

Jeanette lake had some new fishermen visit for a 7 day trip last week. No northerns were caught over 40 inches but the biggest one was caught off the dock by Cory and Vern caught 2- 36 inchers. Doug and Don had one exceptionally good day on walleyes, they caught many fish but there was a half dozen walleyes that were bigger than 24 inches. Good day eh! The biggest walleye was 26 inches for the trip.

Shearstone lake had the Olsen party beat the water last week. Dave set the bar very high for the biggest fish early. In the first hour of fishing he had caught and landed a huge 41.5 inch northern! Al caught the biggest walleye of the trip measuring a hefty 27 inches. They commented on the beauty of the lake and the choice of location of our cabin. It is a great spot amongst the big tall spruce trees.

The Stroup party who venture from Ohio to come back to their favorite vacation spot on the Cobham River had another great trip! Everyone in the group caught at least one northern over 40 inches. I love seeing the changed look in peoples faces from the beginning to the end of their trip. These guys looked like they were very content when I picked them up. Spending a week in the bush will do a world of good for anyone from the high pressure executive to a pain in the neck teenager. No Internet, No Cell phone, just the great silence and the sound of the wind and the loons.