The most competitive tournament I have ever seen.

We hosted the Provincial Bantam(14-15) Girls Rural Hockey tournament this weekend and saw competition so evenly matched, our team went from thinking we were eliminated in the morning needing a win, to seeded second in our pool of 4 teams by that afternoon. Our team consisted of players from or in the neighboring towns, some who play with the boys, some who have played in the past but were not playing this year, ages ranging from 13-15 with the exception of our goaltender who was the ripe age of 10!!! She is a great goalie, as good or better than most of the older girls there.

Here is the link to the Hockey Manitoba website. Two pools of four teams from all over Manitoba. We started the tournament on Friday at 9am and played our second game at 7pm that night. Not the best draw. We started the tournament with 2 loses, both by one goal. A 3-2 loss to Portage La Prairie, a game in which we dominated but were still experimenting with line combinations. Remember, we are playing against teams that play in organized leagues and we are a team with a dozen practices and 2 exhibition games under our belt. We spotted the Terriers a 3-0 lead and almost came back in the third but still there was a great sense of heart in our team. It was a tough one to lose and our opponents only were to get tougher.

Our second game was against Carberry, a town with a rich hockey history and who I have had fairly good luck in beating in my lifetime. Before we knew it we were down 3-0 again and had a hard fight back. We scratched and clawed our way back to tie it at 4 in the second period when we had a face-off in our end with 15 seconds to go. We tried to keep the puck to the boards but Carberry got a shot at the net and the ref called it a goal but I swear I could see the puck in the air as I heard the horn sound, those ones generally come back to haunt you. It did. We fell behind further early in the third but had totally taken over the game. We resorted to an old style of hockey that works. Dump and Chase. When we dumped it in and made the Carberry defense turn back, we took back the puck and created scoring opportunity’s. We finally beat their goalie with 4 minutes left and had enormous pressure for the remainder of the game but could not beat their netminder again. A 6-5 loss.

On Saturday we had to win, our backs to the wall, and a tough opponent, Minnedosa Bombers. They had 2 players that could really giver. I needed a strong checker to pester them and knock them off their game. Many times in my career, that was my job. During the game I tried to use a couple of different players to accomplish the task but we were again down 2-0 after the first period. Things looked bleak but I had hope, we needed to keep with the simple parts of the game and I needed a fast checker who could put pressure on their best players when they had the puck. Maija was that player, my kid. She told me she could do it and she did. I then had to keep the lines matched so that our best were out against their weaker line and our checking line was out there whenever possible with their best. Maija created many turnovers and wore down our opponents so our older girls could score. We fought our way to a 3-2 win and better goal average than everyone but Carberry who had 3 wins in our pool, a 3-way tie for second with one team going home. We had a .006 better goal average than Minnedosa!

Good enough for a spot in the semi-final, against another undefeated team, the Neepawa Natives. The favorite coming into the tournament and had 3 lines of fairly even players with 4 very good hockey players. I stuck with the same lines, our 3 strongest players on one line and Jerrica, Maija, and 2 left wingers switching off flanking them on our checking line. An excellent game we played in front of a loud home crowd but had some bounces go against us and had a crushing loss to the eventual gold medal winners, 3-2. Another game we looked stronger again and had all the pressure with our dump and chase hockey.

Carberry lost in the other semi-final and it was a rematch for Bronze! We were ready.

We played solid and disiplined in our style, not our play. We took the play and the body to them. Although there is supposed to be no contact in girls hockey we had a number of penalties but were dominating the game. Then with a 2-1 lead after 2 periods, we were down 3-2 within one minute on 2 fast goals by Carberry with 12 minutes to go in the game.

We tied it up at the 10 minute mark and it was a game. End to end hockey, plenty of bodychecks that the ref let go, scoring chances for each team at both ends. Carberry struck first with 4 minutes left. No panic was felt on our bench. All I kept telling them, dump it and be the first one to get it. We continued our pressure and took the play away from Carberry. Evening the score with 2:12 left! The roof was almost coming off the rink it was so loud. After the draw at center ice, Carberry took a blatant tripping penalty and we had a power play with 2 minutes left. We smelled blood and went after it. Paige scored her third goal of the game with :54 seconds to go. We had the crowd and momentum on our side and held on for a 5-4 win. The best finish our girls team has ever had! What a great way to end the season. 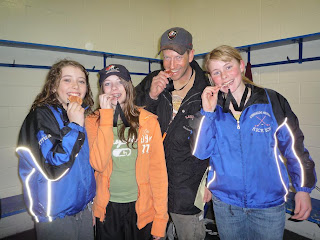 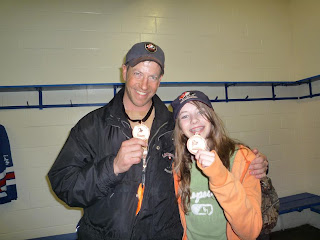 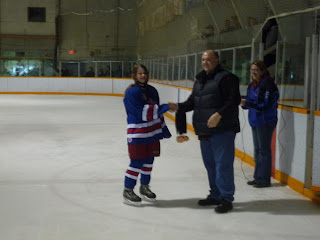 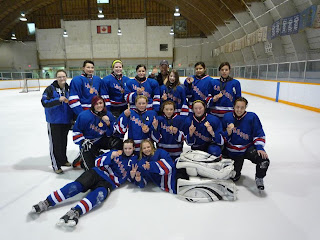 My buddy Floyd who was a very intense player has taken up refereeing and is very good at it. Strange to see a guy who beat another player with his own helmet keeping the peace. 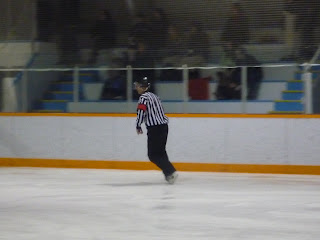