Winning. So much better than Losing!

Our Peewee team was off to Dominion City this weekend. A small farm town in Southern Manitoba. We knew none of the teams there, just that they were from towns similar in size to ours and knew we should be competitive. These kids have been playing very well since X-mas and it was a pleasure to coach them.

The weather gets a little white on the prairie, but hockey people will travel in almost any weather to play. A perfect style of arena for us to play in. Cold and crisp. The last time I was in this arena, I was involved in a bit of a scuffle and ended up biting someone’s finger when I was playing junior hockey! 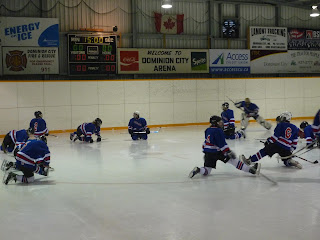 After winning both of our round robin games, 2-1 close one over Iles des Chiens and 9-0 over Lorette we were in the top position with a spot in the gold medal game. Our opponents were the Landmark Blues. A team similar to ours who liked to play rough. Our kids were pumped and ready to play. We had a 4-0 lead right away and played very solid in holding on for a 6-1 win. As it happens sometimes in hockey, the game started to get ugly when the score is one sided. Landmark was getting frustrated because we were playing very well defensively and started to run our players. We gave it right back and made an entertaining final in the tournament. A few penalty minutes later we had done it! Gold!!! 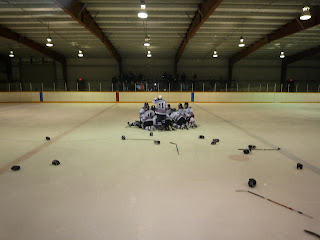 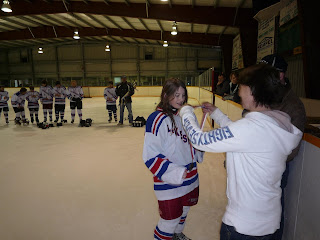 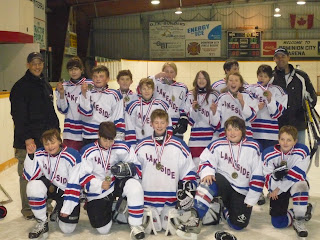