My brother Jamie and I have been fishing hard lately and it feels good to be out on “the lake” again. The ice in the bays in our area is nice and smooth. Great for setting on. There has been lots of wind too though which is normal for freeze up time. Mountains of ice are forming daily on some reefs in the distance off shore. We are just starting to take the snowmobile out to fish our nets. We walk many miles a day in the beggining but it only gets easier as the winter goes on. 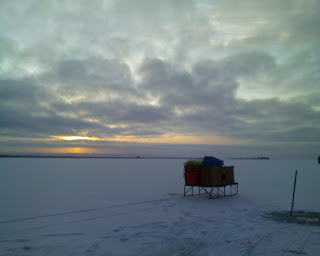 Today we were going out to set inside of Long Point. A place you always have to be careful around all winter long. The current, when the wind blows, whips around the point making the ice unreliable at times. We always give it a wide berth. We took the snowmobile along the shoreline out to the inside of the Point, staying close to shore in case we fell in. 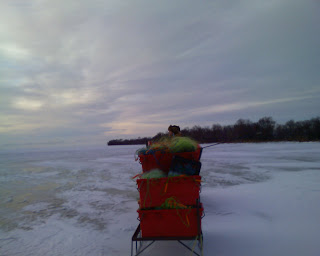 Today we had a first for us! We went in….the whole outfit. 1 snowmobile, 2 sleighs, 20 nets, all of our pegs, weights and the Jigger went in the lake! Jamie and myself too. 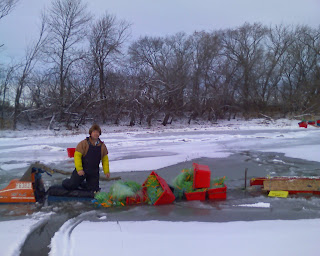 We stay close to shore for the shallow water but the ice can be thinner there as well. Which was the case today. We were almost to where we were going to walk out to set when I yelled at Jamie because it was cracking alot. Some cracking is very normal but I knew this was not! He did not here me over the sound of the snow machine. We were driving on top of a snowbank as well. The ice is usually thinner under a snowbank because of the insulating factor. When he looked back I yelled again and he could read my lips….It is cracking a lot!

No sooner did he steer for shore, in we went. Thankfully it was only on 2-3 feet of water. The snow machine went in first with both sleighs full of nets and gear coming in right behind and spilling into the icy water. Jamie hit solid ice before me but we were both scurrying like rabbits to keep dry. I ended up with wet feet right after impact getting out but Jamie did not get wet until he went back in to tie onto stuff so I could stand and pull our gear out. I was totally expecting to fall in. It was a lot deeper where I was pulling the stuff to. In all we only lost 45 minutes of time and went right back to work. Wet feet in the Arctic boots we wear are not an issue. They are designed to keep you warm even if they are full of water.

This is a Moto-ski Spirit, more commonly known as the Elan by Bombardier. Not made any more this was the best snowmobile ever built and used by thousands of trappers in Canada. One cylinder and very light, this awesome machine threw water off the belt and started to grab when Jamie giver the throttle. It was not quite deep enough to drown it so we just broke ice until it climbed up onto the ice. One tough machine! Here she is. It was built in the 70`s. 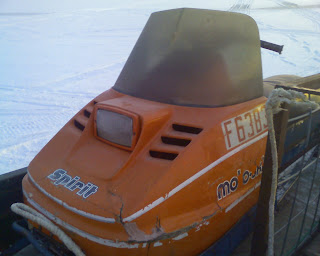