The first moose we took during the second week on Loree Lake was a tough one! We finally had a small reprive from the east wind and were calling our way into an area to hunt when we had an answer! David looked at me and asked how close I thought he was, 2 or 3 hundred yards I said…. we turned our heads and he was right behind us, 150 yards and getting closer. Not much time to get prepared. I made a couple of quiet calls and he came even closer yet. When he got to around 80 or 90 yards he walked broadside….Boom!! It was a good solid shot. The bull took a couple of steps and stopped. Boom! Another solid connecting shot. Then he went down but only for a couple of seconds and then got up!! As he started to head down the ridge David gave him another one that I heard hit again. The bull then looked like he was done. Walking a few more steps then going down a 150 yards or so away. We watched for awhile and then figured we would give him some time to expire. If you chase big game up before they are finished, they may head really far into the bush before dying and in the burn you do not want that!!! So we went back to camp to have a coffee and returned about an hour and a half later. 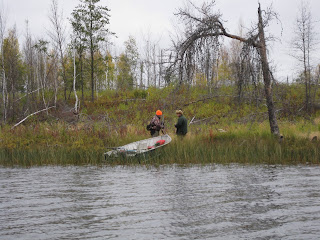 As we were heading up to the spot where we shot the moose we looked up and saw a moose running away at a good clip, not appearing injured at all!!! It was not as black as the one David had just shot at. I continued to call and he came right back to us. We watched him for 30 or 40 minutes just to be sure that it was not Davids bull. This one was a much smaller one, a young bull just hanging around the action. There was a cow in the vicinity as well, so we had ourselves a moose honey hole here.

This young bull was afraid to come out of the long weeds for quite awhile. After some of my sweet talking he walked right out and we could have shot him easily. We knew Davids moose should be lying not far away. 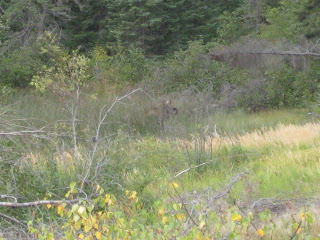 When we got to the spot where the moose went down….NO MOOSE! There was blood but not alot. A tracking we will go. The burn was thick but not unwalkable so we could see his track at least from time to time. 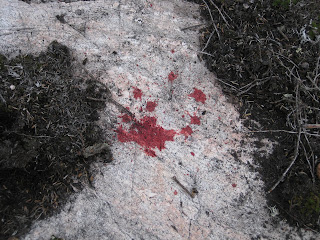 The blood trail started to dry up but the tracks were quite visible as we got further from the lake. He was hurt bad too! He was really having a tough time walking, I could see he had to be going on 3 legs, his toes in the front were really splitting out like he was putting alot of weight on it. He was also starting to make a turn back towards the water and the spot where I was calling the small bull earlier. I knew then we would catch up to him. 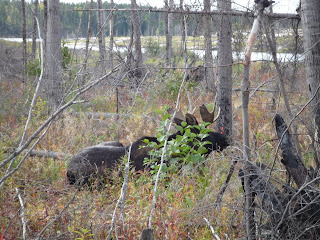 There he was!!! Laying there. As we walked closer to him, he lifted his head! One last shot and he was done. A very exciting hunt, Moose all over and finally one to take back to camp. He had us a little worried, but all 3 of David’s shots were good solid hits right in the vitals and front shoulder. This was one tough bull! 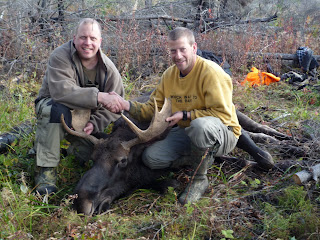 100 plus pounds of Moose meat! Easy with a good pack frame and tied on with hockey skate laces! 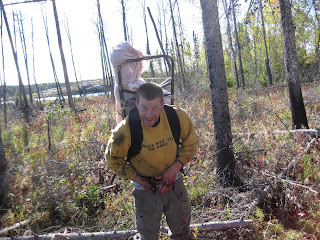 This is an awesome meal! Organic anyone? 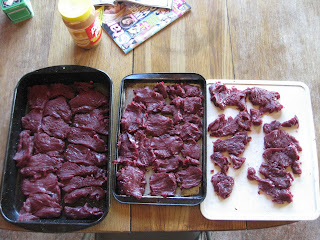