Have you ever been run over by 3 moose?

With David tagging his bull on day 2, it was time to get Dad one. Bill had shot a few moose over the years and wanted to make sure his son got his first. Done. We had more lake yet to cover and had found some fresh sign in some other parts of the lake which had new sign since the first day we looked at that spot. We were close to them. But the wind would not let up making calling difficult. The change of seasons was here. Sometimes it comes in with a week of wind like this year but I knew that things were going to go our way, eventually.

By Friday James had 2 moose already for his 2 hunters and they were ready to go home. After hunting with Bill until noon, I left in the Otter to run over to Shearstone and take them out. I left Bill up on a nice high ridge looking across onto a nice hill and into a valley. A moose could come out anywhere at anytime in this spot… Bill is a good moose caller and continued to call here all day.

Mid afternoon, Bill heard me return in the Otter and knew it would be around 20 mins until I returned with the boat. This time I spent a few extra minutes in camp to tie the Otter down putting me back to Bill 25 mins later than he expected me. He headed down to a small sand beach to wait. He had not heard any answers so far all day and was going to see if there was any new tracks in the sand. As he was waiting for me, he looked back to the spot where he was sitting…… 3 moose came over the hill and walked, at a very fast pace, right near where he was calling. He figured they were headed down the trail right to the beach where he was standing, and they were! He grabbed his gun and when they got to be 40 yards away he finally waved his arms. The calf in front, behind was the cow, and a small bull had his nose right up her butt chasing her from behind. The calf turned to Bill’s left with the cow and bull in tow. As the bull passed at 25 or 30 yards….the 300 Win. Mag. let loose! The bull took a few steps and got into a dead end in the burn from fallen trees and turned around. Not a good decision with a veteran moose hunter standing a few feet away. One more round from Bill and it was over. Father and son both successful in harvesting moose.

All of this commotion took place as I was enroute to Bill. When I reached the narrows just before getting to the sand beach, I looked up on the hill and saw 4 big ears looking over the hill. I killed the motor and watched….for 15 minutes. The cow and calf were standing on the hill not 40 yards from where Bill was sitting, so I thought. I got tired of waiting and went to where I had dropped Bill off. He was not there. I called my way up the hill, he was not in the spot where I thought he would be….I hoped he had one down. I called again and I heard him call me back. I got one he yelled!

Bill said, He wasn`t big but he was less than 50 yards from the lake, pretty hard to say no to that on the second last day of the hunt!

It was mid-afternoon, plenty of time to get him home before dark and have a good supper. Lets cut a trail…. 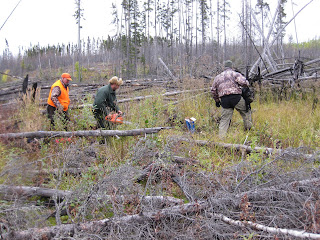 Here is the reward of having patience. A father son double header. 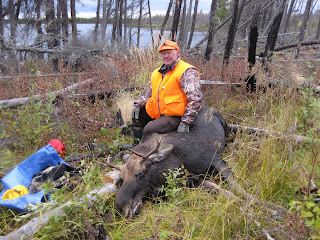 The first thing I do is put the beard in a tree. 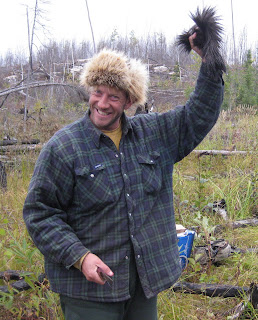 This is the best tree I have hung it in yet! 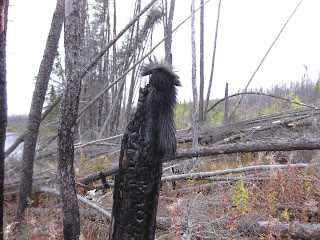 It is nice to recover your bullet and see that it did everything it was supposed to do:) 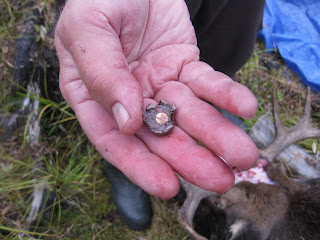 It was nice to have Josh staying with us, for his company of course, not his young back and legs!! He really enjoyed being apart of the hunt and got right into it. 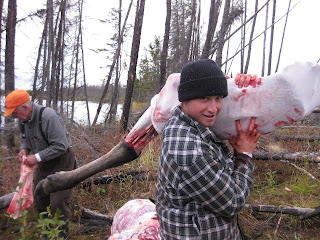 The father son moose hunters are returning next year to hunt the monsters again! It gets into your blood. I love it! Can you tell… 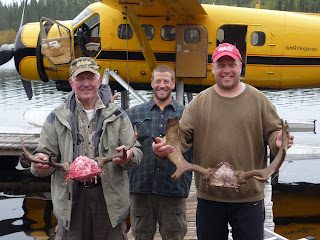