Summer is flying by.

The season is flying by and September is almost here already, it seems we just got started. Opening camps and there were no leaves on the trees. Today, on my way to Blackbirch and back, I noticed lots of trees starting to turn yellow, that only means one thing….Hunting season is getting close!! My favorite time of year. There are still some fishermen yet coming to see us and many have gone home recently happy and refreshed after a relaxing vacation.

Here are some recent highlights:
Blackbirch had the Ryan and Schultz parties fish them recently and they both had great times. These people from the same area of Minnesota, love Blackbirch lake and it shows. The smiles on their faces when I pick them up is kind of a dead give away! There were many stories from the last 2 trips in there but here is a couple. Dave and his buddy Ben from the Schultz party caught 302 fish in one day. They were on the lake by 6:30 am and fished until around 6 pm and had a blast. Ben said to me that this has to be the best walleye fishing in the world! I just picked up the Ryan party this morning, a group made up of mostly couples. The boys had to have their guiding hats on this week since they brought along the women this trip. And as I expected the women outfished the men again….but Kevin did catch the biggest walleye of the trip measuring to his personal best of a fat 28 inches.

The Love party fished the Cobham River last week and were very impressed! They had been fishing in the Armstrong area for 25 years and saw a huge difference in the quantity and quality of the fish they caught. Much more walleyes and way bigger on average than they have ever caught before. LeeAnne was ecstatic on the way out when she told me that they had many double headers but one day her and Jim both had 5 pound walleyes on at the same time. They will be back!

Daniels had some regular visitors back again, the Herrington/Clark party. Here is last years post regarding their 40 inch club Brad C. is the last member waiting to catch his 40 plus inch northern. He has a large number of 39.5 inch northerns to his credit but just has been eluded by his Holy Grail. This was his year, finally catching a fish big enough to join the club his own son has been a member of for some time. There was no disputing this one, measuring 41.5 inches. I will share the pictures when I get them. They said walleye fishing was quite normal and the northerns went absolutely crazy one day before we had some bad weather which was a lot of fun.

Shearstone had the Thaller family back in 2009, 2 years ago they fished Cobham Morley and caught some Big fish. Here is the link to the post from their last trip. The boys are getting older and can catch fish with the best of them. Fishing right off the dock was awesome too. Peter caught a 25 inch walleye and a 38 inch northern, the biggest of the trip. They also had a bigger northern on but did not get the net in time and lost it but they were really excited. Joey who is 7 or 8 now caught a 32.5 inch northern….on a 18 inch walleye. They could not get the northern to let go so they just netted both of them!

The boys and I spent the night at Morleys the other night to rebuild and raise the first section of dock near shore. The water has been high for 2 years and has finally gone down to a point where some work can be done. Nice to have this job out of the way. Of course the fish fry was great too!!

The Otter looks good on a nice night. 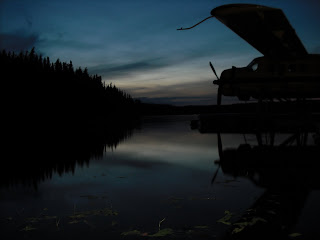 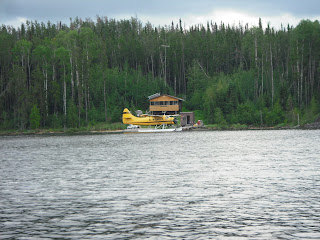 The new dock is higher and drier. 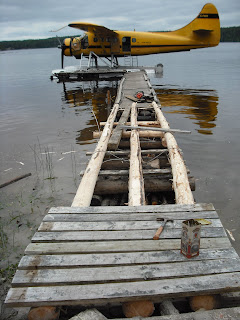