Weather is turning, Big ones turning on!!! 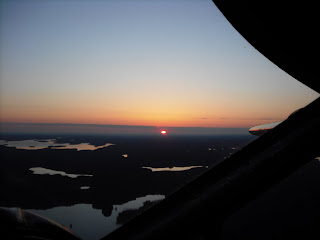 It was a busy weekend with lots of fishermen heading out to the bush and many coming back with big smiles on their faces. Fishing overall was good but the colder weather definitely slowed down the fishing early in the week compared to the sunny weather during the last few days. The northerns are done spawning for the most part and the walleyes are in the process as we speak. Water levels are still high but Vee lake went down quite a bit so the rest of the lakes will follow soon as long as the weather stays decent.

There were some real trophies caught and released this week, many Northerns over 40 inches with a 42 inch on Vee and a 43.5 inch on Cherrington. Here is some of the highlights from this week.

Morleys, Mirick Party, These guys have fun no matter what the weather, good thing too this week. Mark, Andy, Patrick and Mats fished hard but never got over the 40 inch mark. Plenty of 38-39 inch northerns but no “Big” ones this year, They will be back next year to remedy that!

Daniels had fishermen from Montana this week and they had an awesome last day, here are their pictures….. 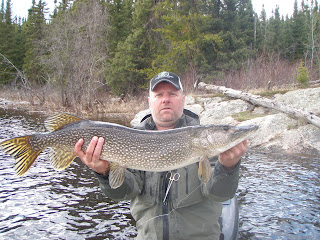 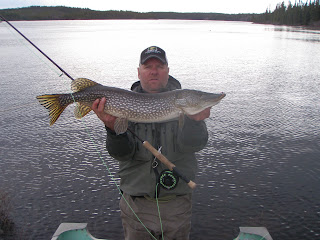 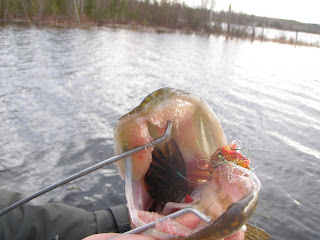 Those fly rods got a lot of use this week! 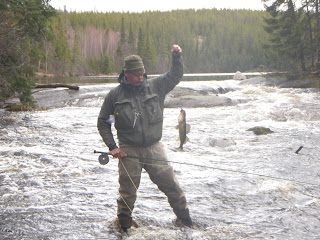 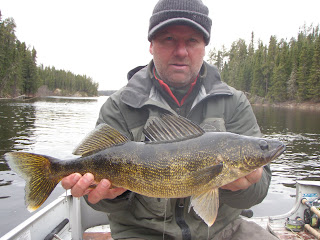 Vee Lake had the Johnson party, Our guests for many years, they have seen it all. Barry’s 20th year fishing in Canada and he said it was the coldest and windiest yet. Numbers were down from last year,(which was one of their best years) but the quality was great! Cody, Barry’s son, was a rookie this year and he had the biggest and smallest fish of the week, a 5 inch perch on a 8 inch Rapalla and a 42 inch northern! They had 12 trophies over 40 inches and 6-8 that were 39 inches. They stated that all the northerns were really thick across the back and heavy, I will put up the pictures when I get them.

Cherrington had the biggest northern of the opening week. A 43.5 inch Monster right at one of the spots I had marked for him on the map! That was caught by Bob C. and his partner Jeff was not disappointed either landing a 40 inch Pike in the same area! Walleyes as usual on Cherrington ran Large! Bob’s largest was a 25.5 inch and Jeff had a 25 inch walleye. They even caught some Lake Trout, Jeff had a 30 inch and a 25 inch not too far from the cabin. One was caught almost right on the surface because his hook was caught up on itself and just running the surface and he jerked it to try and straighten it…The trout came right up and took it and straightened it out alright. They almost got stuck out on the big lake one day too as the ice shifted after they were out there.