It is that time of year again and it is always exciting! We ended up in 3rd place in our league and have to play the 1st place team in the first round of the playoffs, best of 3. Our opponents are the Stonewall Blues who we have a win a lose and a tie against this year. It is going to be a rough series. Every time we play it has gotten more intense. It will be tough but we can do it, we may not be the fastest or most skilled team but we have Heart! Our team tasted Victory last season so they know what it tastes like. Here is last years winning post.

We had 2 games remaining to play on the last day of regular season so we had no choice but to play them on the same day. We travelled to Stonewall for a 10 am game and then had to eat in the vehicle to play St Laurent at home at 1:30. We lost the first game to 2-1 against our opponents in the first round in a close game and then tied the last game 3-3 against the last place team! We were losing 2-0 after 2 periods. It was a Horrific game. I have not seen these kids play like that in a long time, I guess it is good to get that over with before playoffs.

At the intermission it looked like we were going to lose this one and I was not very happy to say the least. I remembered back to when my Dad coached me, when we played badly, what did he do to motivate us……Freak out! As soon as we got into the dressing room the garbage can got a good hard boot across the room to get everyones attention then a short “motivational” speech, and I left the room. Let me tell you, there was a different team on the ice in the 3rd period. We came out flying and went up 3-2 10 minutes into the period. St Laurent had a sniff of victory and came hard at us. They ended up getting the tieing goal with a couple minutes to go. We were all over them for the remainder of the game and hit the goal post twice and even scored once but we had a delayed penalty and it was dis-allowed. We had to settle for a tie. At least we saved some face in front of our home crowd with a good effort in the third.

My oldest daughter is playing in a AA girls league this season and has one game remaining. Hopefully they can go far in the playoffs as well.

Here is Maija before the first Sunday game. 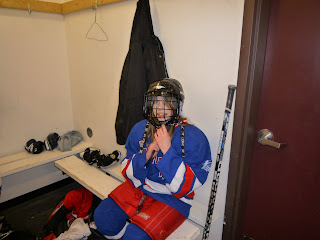 Jerrica, on the right is the smallest player on our team, she is the hardest hitter though, she can knock the biggest of boys on their butt. She has an awesome skating stride and a mean streak that resembles yours truly on the ice. I really enjoy having a team of boys and girls playing contact hockey. 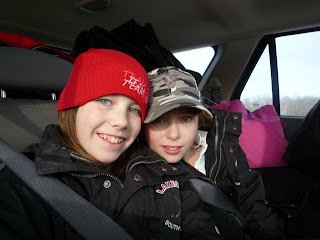 Maija and Jerrica from our team were chosen to go to a Girls Developement camp for a day. It is good for these kids to be coached by other coaches, meet other girl hockey players and most importantly get some exposure. There are more and more opportunities for girl hockey players every year. 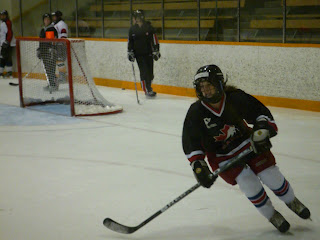