Moose hunting this season was very good! We had 8 guided hunts and 4 unguided hunters. We ended up with 5 moose for the guided hunts and the unguided guys from Tennessee saw 2 and heard multiple moose calling but were unsuccessful in bagging a moose. They were so close to a moose one day they could here the moose pulling the leaves off the branches just up in the bush from where they were. Another time they heard one whacking it’s antlers on the trees, and also heard a cow on one side of them and a Bull grunting on the other. So close. They really enjoyed themselves and were really happy on the way out! I have so many stories to tell that it will take a couple of posts to get them all out. I am only going to give you the 1st weeks stories today. I have to head up north tomorrow to finish some jobs and close the rest of the camps. It looks like the weather is going to be quite wet…..Great!

During the first week of hunting I was guiding on Blackbirch with a couple of younger hunters from Northern Wisconsin, Franz and Ben. This was the first time that I ever guided someone younger than me, maybe I am getting old? We had a great time and drank the odd beer together in the evening after hunting:) Bob, Franz’s Dad, and Gene were also along for the ride and fished and helped around the camp while we were hunting. We hunted long hours, 13-14 hours a day, usually never coming back to camp. The weather was ever changing during the first week but we had some really good calling weather. Right from the first day we had some action. Cows calling me back the first day, bulls starting to answer the second, and things only got better from there.

Thursday of the hunt was the first day we saw a moose, and he was coming fast! I have never seen a moose move so quick. A bull had been messing with us for a couple of days in one spot and Thursday evening as I was calling around the shoreline we heard a big “whoosh” as his antlers cleared the brush. He had stepped out on the far shore across the lake and I was trapped in the open about 200 yards from Franz. By the time I had Franz on his way to me to meet up with this 40-45 inch Bull, he was almost on top of us already, but I was not worried, we were in good position, we were going to meet him halfway on a point. I was quite confident we would have a shot, and it would be around 30 to 50 yards. This determined bull barely stopped as the shoreline he was walking on was a nice sand beach and he was going really fast, not the usual slow stagger a Bull does on his way to a call, not even grunting. Just as he was to the point where we were to meet, he disappeared! Ducking into the thick bush just before he was getting to a spot where we could get a shot. I continued to call and walked in the water to simulate the cows getting nervous. The wind even continued to be in our favour, I still thought we would have a chance at him at this point but the shot would be much closer than 30 yards, more like 10!!! Just when I thought he was going to stick his head out of the bush, right on top of us, he grunted at us, LOUD. He must have smelled us or just knew something was up. As I have heard many times in my life, he vanished silently. The next time we heard him he was a ways off and getting further away. I continued calling like a banshee and worked up the shore where he went and then back to our original position. My calling was working…. we could hear him coming back, in the bush this time. He messed with us until dark about 50 yards behind us but never showing himself again. Quite disappointing but I knew we would be successful yet. Attitude is key during a Big Game Hunt. I have taken a Bull at 7:00 on the last day of a hunt so I never give up.

On to Friday. The weather was a little windy but I could tell that it would go down by the evening. I had the boys out at some spots as I continued to check spots for the most recent sign. Walking in some places that no man should be going. Thick rugged country that was horrible to experience, but that is where there was another Bull. I picked up Ben mid-afternoon and took him to a spot I had never hunted before. I posted him on one side of a small point and i called from various sides in different directions. I was across from Ben when I heard an answer, Ben had heard him a few times before I did since he was closer. Such a sweet sound. This Bull was not an easy one to bring out to the lake. He came within 150 yards I guess from the shore and wouldn’t come any closer. The bush along the shore where I had walked earlier was really thick, Really Really thick! He did not want to go through that stuff. He must have grunted 150-200 times. Then he left… I kept working him and then he came back! Grunting along the thick bush trying to get downwind of us but the lake and more thick bush stopped him from going to far. Again he started to leave. I put on my Cow moose charm and brought him back once again. This was a most excruciating experience. It was almost an hour by now of low angry grunts! This time when he came back he was louder and mad! As I heard him make up his mind to come through the rough terrain, you would have thought he was a Freight Train! Ben was about 15-20 yards from me and he needed no coaching, the Bull was about to come out of the bush 50-60 yards across the bay from us and we had talked about what to do when he came out. I saw the last tress moving and the a black spot. He stopped just back from the shoreline, for what seemed to be an eternity. I knew to wait….. Then a few more grunts and I could see the Stagger and the Huge Rack on him coming through the remaining brush to the shore. He was Impressive! We had high water on Blackbirch so the moose had to come out into the water to be in full view. As he Staggered out into water about knee high he stopped!!! Looking to his right and then away from us to his left. That was the time, and Ben knew it too. BOOM!! I could see he shot him right where I had told him to when they turn their head away. He stumbled slightly and turned to his right and stood again, BOOM! Another perfectly placed shot, he took a few more steps and stood again. BOOM! That was the final shot, down he went, in the water. Good thing there was a nice smooth rock nearby to winch him up on. Good times to follow! Everyone came out to the kill site to help butcher and made a big fire to work by since the shots were taken around 6:00. We were all done by 9 or 10 and ready to try to find another one for Franz. I have great video of the whole affair so keep an eye on the Blog for it soon.

As we continued hunting, we had more answers from Bulls but no more willing participants. These guys had an awesome time and plan on hunting again in 3-4 years. I am looking forward to it!!! 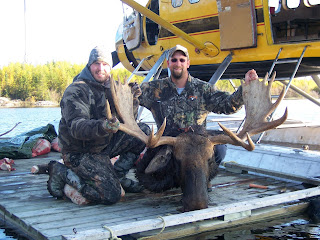 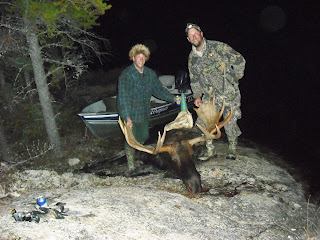 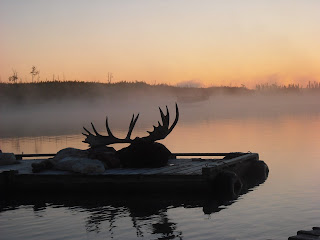 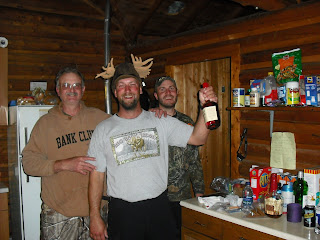 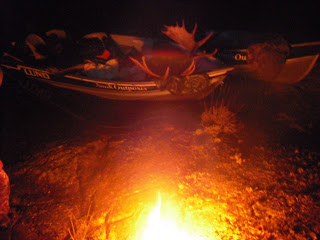 This is the spot where Franz and I had the cagey one get away! 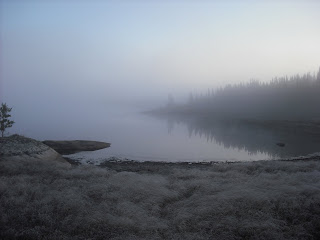 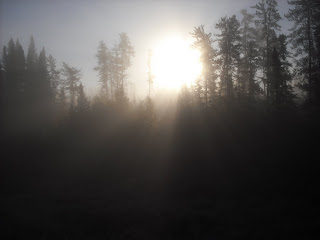 Jerry and Dave hunted Shearstone during the first week of the hunt with my long time buddy James. He is an excellent guide! He takes Moose hunting quite seriously and likes to hunt just as long of days as I do. He has experience on Shearstone and knew where they would be. Right from the get go they saw moose. Jerry passed on a spike bull early in the hunt and Dave shot his first moose fairly early in the hunt, a nice spike Bull. Jerry was pleased he passed on the first one he saw because he ended up getting a shot at a nice 2 1/2 year old bull. James said he made a perfect shot. Jerry loves it up here and is already making plans to make another trip next year. 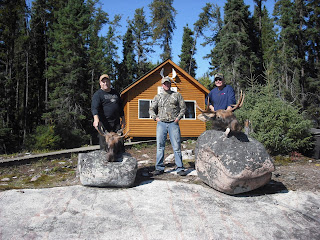 James and I both got some awesome video of some of these moose this week and I have a number of really good stories to tell! I will work on these soon and put them up as soon as I can.