The Otter is up on Dry Land and is going to get some much deserved rest! Our season is over. Still a fair amount of work left to do around the base in Red Lake but it is nice to a get the Otter put away before we get a big snow storm!! 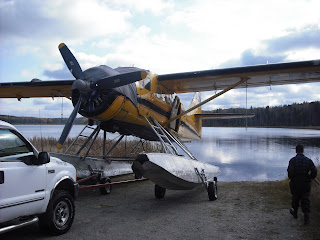 Smokin a Big Cuban on our last night in the Bush! 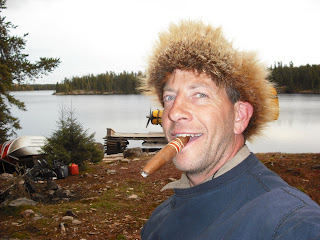 We did a lot of work around the camps this fall. Here is just one of the projects. Morleys had a new fish cleaning table/deck. I will tell you the rest of the projects and improvements in our Fall Newsletter. If you haven’t been receiving it, just sign up on the right hand side of my Blog. 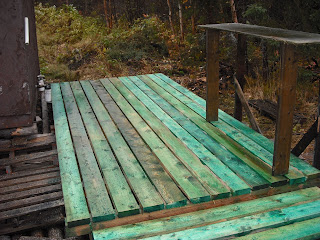 Rena and I should be back in Manitoba soon. My Senior Hockey team has taken a year leave of absence from the league due to lack of players. It’s very sad, the first year I have not played organized full contact hockey in 29 years! I hadn’t thought about how long I’ve played until just recently but this would have been the 30th season. It looks like I will be skating a couple times a week though. Also I’m coaching Maija’s team again and it looks like we will have 8 skaters and a goalie, first year PeeWee’s, first year of body contact. There will be no whining about ice time this year:) They are going to be a great bunch! I’ve coached all of them since they were Squirts and they all want to win!!! With a small bench, they will have to learn to play smart. My Oldest daughter Taina is playing Girls Hockey exclusively this year on a regional Bantam AA Team. Rena will be travelling with her most of the time.

I know Deer Season is coming also so keep an eye on my Blog for any Big Bucks I come across!