The Sanders Family have been fishing Cherrington Lake for a very long time, since Rena and I used to live there back in 1996. Adam was only 7 and Kimmie was 11. They are both adults now and very seasoned fishermen. (Sorry Kimmie) Still fishing with Mom and Dad every summer. Their oldest son Mike is getting married and was not to happy that they were up here having fun and he was at home working. Poor guy. He brought up his fiance Abby last year and they will return next summer! I am sure Kim and Adam will not rub it in how good the fishing was.

Now for the fishing report. I tell many guests that the more time you spend on a lake, the bigger the fish you will generally catch. This was true this week. The Sanders said that of all the years they have fished Cherrington, this was by far the biggest on average they have ever caught and way more northerns than usual. 25 inches was the largest walleye but there were an absolute ton of 23 to 25’s. A number of them coming from the depths of the Big Lake in 60 feet of water! They were lake trout fishing and caught a couple nice trout but caught way more walleyes than trout. Scott said they almost looked like another species of walleye they were so fat and wide across the back. He said his forearms were getting really sore from bringing up those monsters from the deep!

Another funny story from this week was when Adam was bringing in an average 31 inch northern he went and jumped right out of the water, which makes for some excitement in itself. But this crazy fish decided to go and bite his own tail in the process! He bit it hard and could not let it go!

The fish of the week was caught by the Big guy who foots the bill! Kind of fitting I think. Scott and Adam were casting for Northern in Walleye Alley and came up Big….. “46 inch Big” They said it was an absolute crazy big fish. I hope to get a picture or two of that Hog!

The weather is very nice so far this week and hopefully it will stay that way for awhile. The water levels are still a little high and we could use some dry weather. 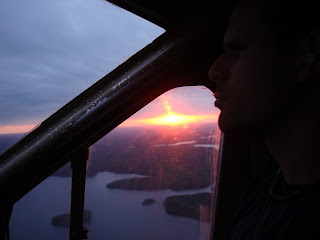