Here is a picture from some comical guys who returned from Vee Lake today. Walleyes were caught right off the dock and here it shows that they were true catch and release specialists, putting them back in better shape than they found them.LOL 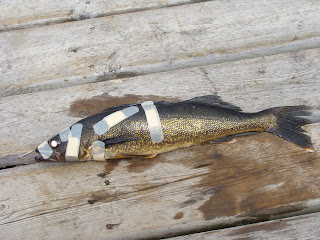 Art and Jim did catch some Dandy fish though. A 26 inch Walleye shown here and also had a Huge Northern up to the boat but since they fish without a net, they released him without even bringing him into the boat. 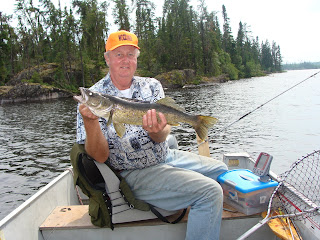 They also said that in one spot for 3 hours it was non-stop fish after fish after fish…. At one point Art put 2 rods into the water and 2 times he had walleyes on each. Technically this is illegal to fish with more than one line but in this case he was not even able to keep up. His words were “what do I do” and Jim replied, “fish with only one” 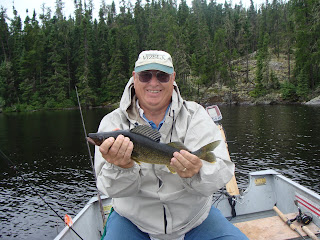 We just took some people who travelled all the way from New York, I hope they do well. They should with the advice given to them by yours truly and mostly Art. A well marked map and even some extra jigs and tails from Art and Jim. This is the second time this week that I have seen departing fishermen giving tackle to the in-going ones. It is truly nice to see that people who had such a great time sharing information and doing their part to ensure the next people fishing our lakes do good as well. We appreciate that immensely, I know where the fish usually are but your best fishing report is from the people getting on the Otter when you get off. There are so many fish that people are not stingy with their spots like in some over populated lakes.