Just like always, the youngest one catches the biggest Fish

Vee lake had some fishermen visit this week that made their return after 8 years. Chris S. was up many years ago and had the pressure put on him to be the guide. He had his 8 year old son Anthony along for the ride and I knew right way he would do well. He did very well in fact, his first fish was on his first cast. A 21 inch walleye!!! Not bad for his first fish in Canada Eh!! The fishing was very good overall for these guys, but Anthony had the Biggest Northern. A Huge 41 inch Northern on 8 lb test with a light walleye rod. With just a jig and a tail on. Most of the big fish seem to be caught at this time of year in amongst the walleyes. Big fish eat little fish, that’s the way it works! Always be ready for the BIG one to rise up from the depths. He is just waiting for someone smaller to slip up.

Loree Lake had the Dubbledee family for 5 days this week. 3 generations getting together and had a great time. Katelyn, who is a senior in high school said that she had the best time fishing with her dad. Catching lots of fish and really enjoying their time together. I can identify with that, this time spent together is so important. Eric and his mom Diane fished together a fair amount as well. They had a funny story. Diane was bringing in a small 10 inch walleye, nothing abnormal about that but when Eric went o net it, he could see a much Larger walleye behind the small one on his mom’s hook. The timing was perfect and in one swoop they had 2 walleyes in the boat. I don’t here that kind of story very often. I hope to get some pictures from this trip as they said that that they have all 3 generations of women holding walleyes. Grandma was all smiles on the way out!!

Here are some pictures we have just recieved.

This is Bernice from the Peters Party that fished Loree a few weeks ago. A 42 inch Northern. 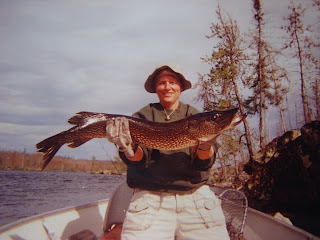 Look at the shear size of this Vee Lake monster. I am contemplating putting up no swimming signs at the camps if people keep on catching Trophies like this! 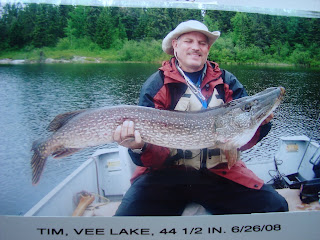