Here is the Holland Party’s 2008 fishing report as I got it, enjoy. 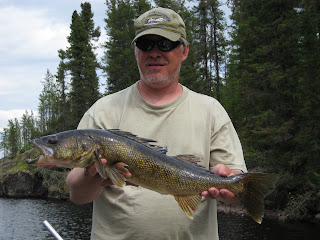 2008 was a challenging year for the Holland group, we had to survive the two hottest days of the trip without beer! If you know this group you know how tough of a challenge this was. We successfully made it thru without dehydrating too badly. It seems like every year brings something new and like each year in the past we can never get enough and can’t wait to plan for our return trip next year.
Weather was very cold, cloudy and rainy for the first three days of the trip, and finally turned into extremely hot towards the end. The beginning of the week the winds were out of the North and we woke to 26 degree mornings for fishing. This seemed a bit cold for mid June even for NW Ontario. The big trophy fish were deep or in the river. Nothing showed up in the bays until the last day. There is nothing like a big Northern swirl attacking your bait when you are fishing the bays. Bryan and Scott both got to experience this the last day and both came up empty. Scott breaking the line as the fish darted under the boat and Bryan lost a trophy 40 plus after having a fight for a couple minutes and Simo unable to show off his netting skills. 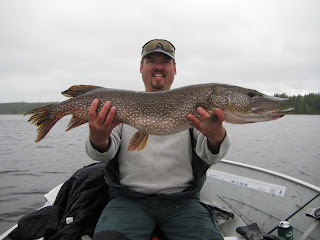 Both the Northern pike and walleyes were up in average size this year again. This is the second consecutive year the average size of fish has increased indicating that catch and release is the way to go to get to trophy size fish. Walleye had the largest increase at about 6% from previous years with an increase of over an inch on average. For the week the average size walleye was 22.1 inches. This made it difficult to catch dinner since we had to throw most of our fish back.
Largest walleye was 27 inches, caught by Mike and Bryan, followed by a couple 26 inchers and a bunch of 25 inchers.  The last night the group saw a huge Walleye floating on top of the water, which had to go at least 30 inches. “Mini Me Cappussi” aka Simo was able to surface the fish again but was unable to hook up. For the week Simo caught the largest number of big Walleye averaging 23.5 inches per fish. This year we had to invoke rule number 8 in the fishing contest which states: “If champion is a tie, settled with casting contest or rock paper sissors, best of seven in either event.” Simo and Bryan tied this year on big Walleye and since it was Ron’s birthday he chose for them to battle it out with a casting contest. Simo and Bryan traded the lead all the way to the seventh cast. In the end “Mini Cappussi rightly won the Champion Walleye contest. Way to go Simo.
Northerns were not in their normal haunts again this year, with main lake points and River out fishing the more accessible bays. This year Tim caught the largest Northern at 39 inches in the river. Although Scott caught one of his largest/fattest Northern in the 11 or so years he has been coming up he lost by half an inch. He caught his on a main lake point trolling a Rapala XRAP. The average size of the Northern increased again this year by 3% or by just under an inch per fish. Everyone in the group caught fish in the mid 30s or higher, although Jim waited until the last day to put is name in the books for the largest Northern caught for the day. Simo caught the largest average fish for the week with Ron close behind with a couple big fish as well. No casting contest required for the Champion.
Jim “Frenchie” French was the designated FNG this year, although he does have previous group/lake experience.  He took the role very seriously, winning the catfish award (smallest numbers for the week) along with Bryan for 2008.  Jim will maintain the FNG for next year by setting his hook so hard into the anchor rope that he busted a perfectly good ultralight rod. Luckily for him Scott had a spare rig that he entrusted to him for the remainder of the week.
Simo once again this year kicked everyone in the fishing contest taking half the money. This is growing old with the rest of us so we voted him off the island for next year. Sorry Simo but there will be some rule changes made to the contest moving forward.
Till next year…………. 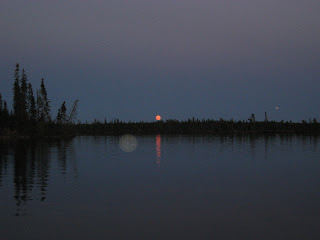