The results are in!

Well, I was hoping to be able to write a fantastic tale of love crazed moose trying to attack us, looking for a fight, trying to meet some lady moose. I have to say we had a great time and hunted many, many hours. Much of it done in rain and mist, and Wind. Dick, Dave, Chris, and a fisherman R.P. were my companions on Blackbirch Lake this week. This is the second time they have hunted with us and Chris was successful in taking a big Bull last time, 2 years ago. A thrilling event. A great bunch of guys. Chris made a comment to me during the hunt that he is not sure why he comes up here, for the company or the moose. I am sad to say this year he came for the company. No Moose were taken during this week of hunting on Blackbirch Lake. I am more upset than the Boys are. Here is how the week went down.

When we left the base in Red Lake it was nice and partly sunny. As we got further north there was more cloud and the ceiling was starting to come down with some light rain. But I could see ahead that life was going to get a little more interesting. A nice line of low CRAP. The last few miles into the camp the weather was getting darn right nasty but flyable. Typical weather for moose season some years…. This was one of those years. It rained every day. I have no problem with rain but it makes life hunting moose a lot harder. They are not usually to active in the rain.

The first day was fairly promising as we had a 2 cows answer us and the rain was not to bad either until late in the day when it rained hard and we were forced in. I have never shot any moose in weather like that.

The second day was active as well. Daisy was on the Beaver Pond and had all kind of activity. He had a bull answer but did not want to come out to the call. He also saw two bears. One huge black bear across the lake which is kind of cool at a distance. The other one was a little closer to his hunting spot. Just down the shore on the same side about 150 yards down. A smaller bear, maybe 200 pounds. Daisy is not a small man, as you can see from his pictures below. He said the bear came and left but did not come any closer or even notice him. I think the bear probably took one look at him and decided that he might loose.LOL

The third day was about to get exciting and creepy all at the same time for one of the boys. I know Chris is popular but little did we know he had a stalker at Blackbirch Lake. He was sitting on the Beaver Pond where Daisy was yesterday and as he was calling the Huge bear from yesterday came back across the lake. He was down a ways so Chris did not worry to much. This was about 9:30 when he first saw him. Chris continued to make moose calls from time to time and a little while later saw the bugger again right across the pond!!! It is a good 400 yards across the lake but the bear knew exactly where Chris was. He said when he would walk down the lake to pee in the water the bear would get up and walk down with him. He was being mimicked. Then when he was walking back so would the bear and lay down in the same spot on the smooth rock on the other shore. I came in to see Chris at 2 o’clock and the bear was laying there sleeping in the wide open lifting his head to make sure Chris was still there and did not even flinch when I showed up. It was a Very Big Bear. I made a few more moose calls and the bear would just lift his head and look at us. Bears like moose and he could hear the cow calls and was looking for the calf if Momma was out on a date, if you know what I mean. The calf would be all alone. I moved Chris to a new spot and the bear was still there when we left. He was pretty freaked and excited at the same time.

R.P. had very good fishing. One afternoon he had 43 fish from 2:30 until 5 o’clock and lost 19. He only kept track that one afternoon but was plenty happy with the fishing since this was his first outpost trip. With all the rain he made sure the fire did not go out anyways. On the last day he had a Huge Northern attack!! I got a little video of the story so keep an eye on my youtube but only caught the end of the story. A 40 plus incher came and hit the walleye, happens up here quite often but this one was different. The Northern hit it and then let it go. The walleye came fast towards the boat and then jumped up out of the water, while still being on his hook. As the walleye came down from the air and just hit the water again, the Northern was there and the walleye was gone. In a Flash!! R.P. had never had this before but was patient and did the right thing. Opened the bail and sat there for 10 minutes. Hoping to land a MONSTER. After he waited what felt like an eternity he followed the line until he thought he was right over the Big One. A strong set of the hook and he was still there. He fought with the Northern for 20 minutes, getting him close to the boat but not close enough. Finally the Northern gave up the Walleye. He never did get a real good look at the fish but reported he was BIG. Of course there was nothing left of the Walleye. A 14 inch fish. R.P. said that there were only a couple of inches sticking out of either side of the Alligators mouth. That tells me that fish must have been a Real Trophy. He is still there somewhere.

Things were not going well on the moose front. Had not had a definate answer since the second day and nothing moving around. Rainy and windy. The temp was good for hunting but the wind made things difficult. We were in need of some kind of trigger I think to start the rut. That sought after perfect morning. Flat calm, Frost, Sunshine. When we woke up the last morning of hunting I thought it was “The Morning”. No frost, actually quite warm around 55, but it was calm and clear. I was jumping. I could feel it, it was going to happen this morning. We were ready to go and it was still dark. Perfect. Then I looked to the west and overhead. Heavy clouds. We were just getting to the boats when they opened up. I guess we needed to have another cup of coffee anyways. It was raining hard. Once we got going at least it was still calm. We called and hunted hard. Sticking it out through the showers that remained for the rest of the day. Dick and I worked a few spots all the way down to the west end of the lake. No answers yet. The rain almost made us turn back once but were far from the camp and decided to call for a while longer. After that rain shower, the weather started to get better. By the time evening came around it was very nice out. Pretty warm but calm and clearing off. This spot off the west end is spectacular. The fire burned here about 7 years ago and is easy walking. Dick commented that it looks the moon with small trees on it. He was amazed at the distance you could see. Miles and miles of trees, rocks and water, and the best part, Nobody else. You can see three different lakes if you stand in the right spot. I have never called in a moose here but some hunters have taken moose here in the past. As we were calling and calling, the sun began to shine, life stands still in moments like that. It was amazing, Dick said that moment was worth the trip. Back to the moose hunting. When the sun started to come out I heard it. A cow called me back! Alot of times there are bulls with these cows and they both will show up. I have experience with last minute moose. A few years ago we got one at 7:07 on the seventh day of a rainy week. I know never to give up. The cow talked back to me for awhile and the excitement was building. I went and brought Dick closer to me because I thought we were going to pull it off. Then she went quiet, no Bull, no Cow. We then elected to go back in a little earlier than our usual dark night ride home. Had a few drinks, had a bonfire, and a great night. No bugs, no phone, nothing but the crackle of the fire and good company.

My opinion on this past week is that the moose were not in the rut. Like I said before we needed a trigger to get them started and did not get it. This crew could only hunt for 4 full days so time was against us too but could not get them to talk to us is all. I have had a long run of successful hunts and this was bound to happen sooner or later. There is talk of the Boys coming back again in 2 years to do it again. They have got the moose hunting bug now. We still have hunters in the bush, hopefully they will have better luck. 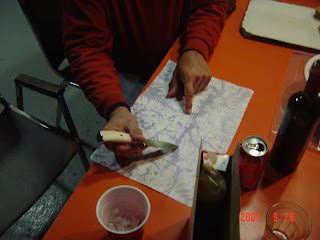 Plotting the next move! 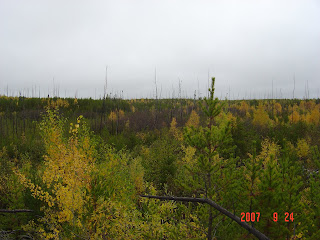 Many hours were spent overlooking areas like this calling and listening intently. 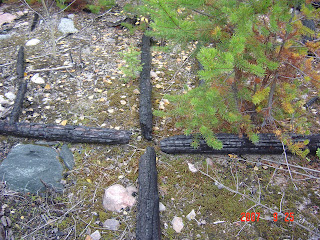 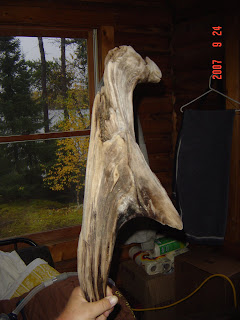 Found a new wall hanging for the cabin at Blackbirch. What does it look like to you? 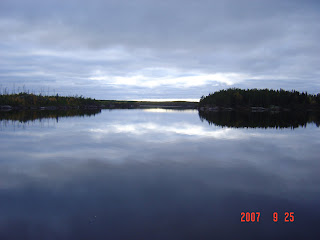 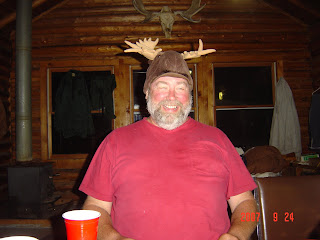 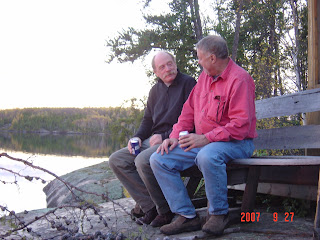 We voted to come in early on the last night and have a few cocktails and a fire. 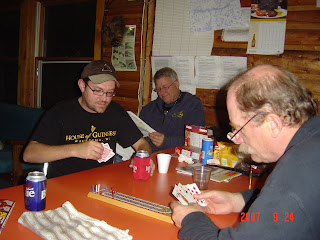 R.P. had the best cribbage luck.