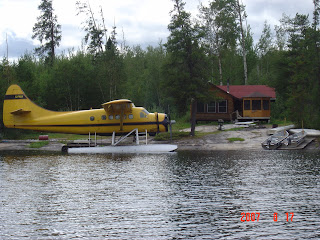 Another week has come and gone in the north. Weather has started to cool off and the walleyes are moving a little deeper but still consistant. Northerns are still active as I have heard many stories about Northerns attacking Walleyes. One report of a Northern attacking a stringer of Walleyes.
Here are some notable fish caught this week:

Springpole Lake Eggers Party. First day they were there most every Walleye was 21 inches or better. Hap caught 3 Lake Trout right in front of the camp, about 3,6, and 8 pounds. Bill had a much bigger one up to the boat but did not land him. Had some windy weather but had fair fishing. Hard to stay on the spots because of wind a few days.

Blackbirch Lake Gerken Party. These guys love Blackbirch. They are ecstatic on the way in and just slightly ecstatic when I pick them up because they have to go home. They had 1687 fish for 4 guys for 5 days. They fought the wind a couple of days but that is the advantage of fishing in the area we are in because you can find places to fish when it is windy. Biggest fish for their group were a 32 inch Northern and a nice 27 inch Wally. Numbers were good but the agressiveness and size were excellent. Pat could not have picked a better place to celebrate his 40th birthday.

Loree Lake Eggerding Party. Mark Z. was taking a snooze in the boat as they were fishing along and caught a 41 inch Northern. Funny. That was the biggest Northern of the trip and the biggest walleye they could muster was a 22.5 incher. Fishing was good but unstable weather made the fish change their patterns every day.

Cobham River Burton Party. These guys are from Alabama and most of them had never experienced anything like this before. They saw a bear one day and had Northerns attack their Walleyes 6 different times. They thought that was so cool. They had 4 Northerns over 36 inches in the boat but the ones that attacked their walleyes were much bigger. I guess their baits were not big enough, they should have had baits as big as a small walleye.LOL. Walleye fishing was good and catching fish not a problem. Depths were pretty consistant at 12 to 16 feet. A 24 inch walleye was the biggest being caught by Jesse.

Cherrington Lake Slygh Party. Mike has quite a bit of experience on Cherrington and loves fishing out on the Big lake. They had windy days on Cherrington too, but still caught fish. Just had to do alot of manuevering with the boat to stay on the spots in the wind. Wherever Gramma’s spot is it was very productive during their stay. They had a lot of fish between 20 and 23 inches and had a Huge Northern get off right by the boat.

Here are a few pictures from the Comstock Party I wrote about last week on the Cobham River. 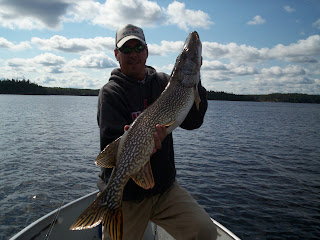 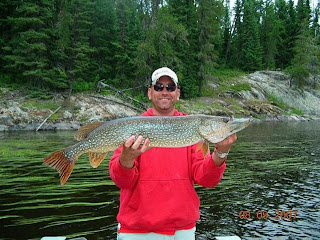 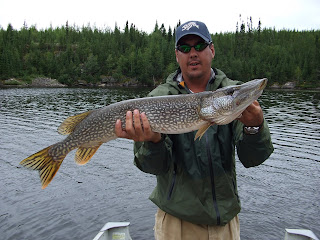 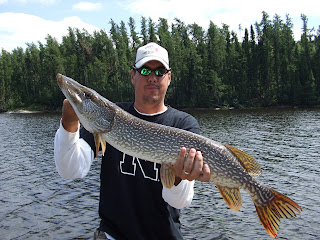 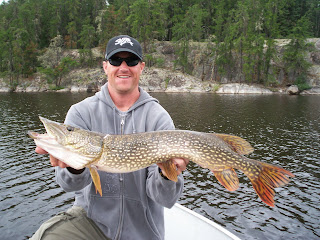 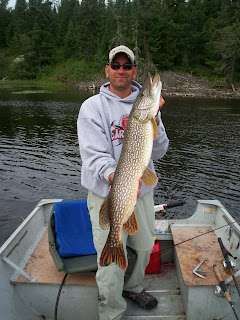 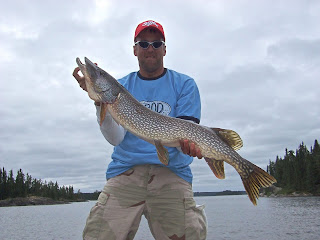 Our website will have the link to all of their photos soon. It will be listed under the Cobham River. Check it out.