Morels, Caribou, and a 30" Walleye

Quite a few interesting things happened this past week. Morels by the pound were seen, picked and eaten at Loree Lake, a Caribou ran between a member of the John S. party and the cabin coming back from the outhouse, and a 30″ Walleye was caught and released on Cherrington.

First the big fish. Ruth B. caught a 41″ Northern in Walleye Alley on Cherrington. Her husband David was the guide and it was pretty generous of him to give her a Trophy Northern for their 25th wedding anniversary. They reported catching walleyes in in 12 to 15 feet of water most of their trip. Another member of their party also caught and released a 30″ Walleye in Walleye Alley as well. As we get into July the Monster walleyes will be moving out to the BIG Lake. As I always say, “Don’t plan on catching our shore lunch out there.” Most fish are between 20 and 26 inches and FAT!!!

John S. and his group of 6 were in at Jeanette this week. They have been to Jeanette 5 times and this is the best they have ever done!! Tons of fish. They stated that they have caught some bigger fish in the past but never this many and in so many areas. They seemed to be everywhere and on the bite every day. One young man from this party was on his way back from the outhouse when he heard some noise between him and the cabin. He looked up to see a cow caribou walking right between him and the cabin. Encounters like that are so cool!!

As most people know there was a lot forest fires last season. Loree Lake was a target for one of those consuming creatures. BUT one item that thrives after an event like that. MORELS, Steve was fortunate enough to have a Gourmet Cook in his party and he spotted the tasty morsels on the shoreline as they were trolling along. They said that was so easy to find. Just troll along and watch the shoreline. They were so plentiful even I was given a bunch on the way out. They were great!! I should also mention that Nick who is 12 caught a 23 1/2″ Walleye, on his first trip to Canada. Way to go. 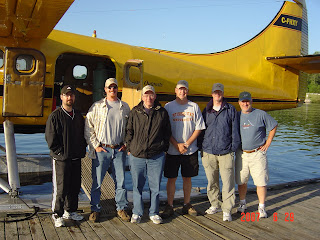 This is the Glasebrook and Burm Party. This Team of Fathers and Sons have been fishing Findlay Lake since the Inagural Season in 1993 not missing a single season. I shudder to think of the number of walleyes handed a sore lip by this crew.