Another week of Fishing over and LOTS of Fish with Sore Mouths!

Another week of fishing is done. The fish are starting to move out from the rapids to the shorelines and windy points. The weather has begun to turn the corner as well. Did not have as much rain up North as we did around Red Lake so water levels are starting to go down. Temps are pretty comfortable too, 50 to 75. The only draw back this week was a couple of days of wind. Most lakes are easy to get away from the rough water but it was still hard to hold the boat in place.

Walleyes are still a little confusing, in some lakes they are really shallow and others they are in 20 feet of water. The weather is becoming more stable so this should make it a little easier to pattern these tasty buggers.

Alot of things happen in a week but I can only write about so many. Here are a few fishing reports and some funny stories from this week.

The Greg K. Party from IL. were on Cherrington this week and had some good fishing. Bait seemed to make a Huge diference for them. Walleyes were hitting very softly. They had to really Finesse the Walleyes into taking the bait. They caught a lot more walleyes in the day if they used leeches or frozen minnows. One day when it was flat calm, they were out on the big part of the lake and could actually see they Walleyes coming up to their bait and just sit there for a couple of seconds before taking the bait. Still hitting it softly though. They even saw a Lake Trout come by. Greg has fished a lot of lakes in Canada and that is the first time he has been able to watch Walleyes taking the bait like that. This was his first trip with us and has another trip planned for August on Findlay Lake.

Loree Lake had 4 couples from Wis. in this week. The Rod S. Party got into some fast Walleye action at the 3rd narrows on the west end. One husband was telling me that his wife was reading and he told her to get ready because they were about to catch some fish. She put her book down and dropped her Jig. She had 6 fish in just a few minutes. That is some good Guiding right there! They did not have to go far to catch the biggest Walleye of the trip though. A 25″ Walleye was caught right off the Dock. Most of their Walleyes were in about 20 feet of water.

The Northerns are feeding pretty heavy, mostly on Walleyes!! I have had quite a few more reports of Trophy Northerns Attacking walleyes.

Tom from the McCarthy Party from Wis.had a 35″ Northern hit his 19″ Walleye and not let go. He took pictures of both fish, the way they were landed. The Walleye was taken by the head and hanging out of the Northerns mouth. Normally the Northerns hit the walleye on the side but I guess this Northern meant business.The report from them said that they had to target two particular areas. One being in 5 or 6 feet of water just on the outside of the Bullrushes, and the other in 12 to 14 feet of water off of the rocky points.They were on the Cobham this past week. When I get that one I will post it right away.

The last story is funny!!! After Hand Picking just the right walleyes for shore lunch, Steve C. from Iowa was the was the man to clean ’em up for lunch. He was fishing on Blackbirch this week with the Sproule Party. After expertly taking all of the bones out the fish and finishing the job of skinning the fillets, he was done. Steve then took the gut pail down to the boat and proceeded to clean his knife in the lake. As he turned around to go up and grab his fish, he saw the GULLS. They were waiting and took the good stuff!!! All of his fish was gone. He got Teased pretty good for that. Ravens are as bad as Gulls. Remember too keep your eyes on the birds. They will eat Surf and Turf if given the opportunity. I speak from experience. 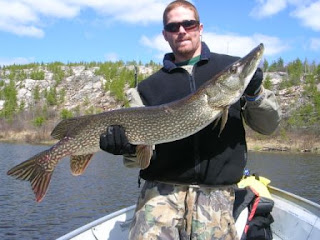